China's Parliament Expands Use of In Absentia Trials Targeting 'Absconders' 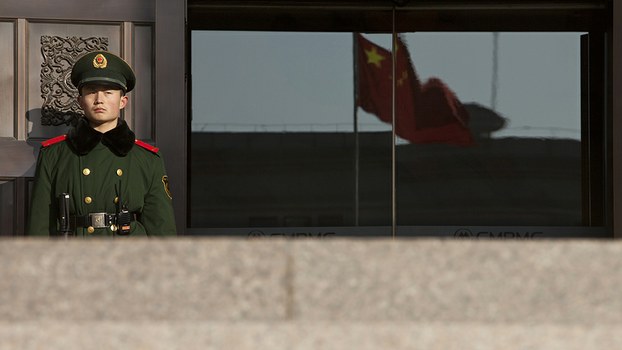 A paramilitary policeman stands guard at the entrance of China's Supreme Court in Beijing, in a file photo.

China's parliament has passed amendments to criminal procedure law to allow courts to try more people in absentia, particularly if they have fled overseas.

The standing committee of the National People's Congress (NPC) passed the amendments last week allowing judgments to be delivered in corruption and "terrorism" cases in a bid to target former officials and others who flee overseas, Wang Aili, director of the Criminal Law Office with the NPC's Legal Affairs Commission, told a news conference in Beijing.

China began using in absentia trials in 2016, but the new amendments will expand their use, with the main purpose of targeting absconders in corruption cases, Wang said.

He said investigators would need to show "time-sensitive urgency" in handling the case, and applications for trials in absentia would need to be approved by the Supreme People's Procuratorate, the state prosecutor.

Officials may also hire a lawyer to defend absent defendants, and relatives will be able to appeal on their behalf to a higher court, state news agency Xinhua said.

Caixin Global reported last week that the new rules have caused some unease in Chinese political circles, however.

"Many have ... been wary of the addition of the trial in absentia procedure in the amended Criminal Procedure Law," the report said.

"The first draft of the revised rules stipulates that trials of corrupt officials who have fled the country can be conducted in absentia, causing concerns about human rights protections," it said, adding that people charged with "serious crimes against national security and terrorist activities" could now also be tried in their absence.

Beijing lawyer Huang Hanzhong said he shares these concerns, noting they could be used against political dissidents whose speech is regarded as criminal.

"We are very concerned ... because this subjects people who flee mainland China because they have been targeted for political persecution to a more legalized smear campaign," Huang told RFA. "It also makes it more likely that their assets and other aspects of their lives back in China will be affected."

According to the new law, judicial proceedings can only be initiated after an extradition has been granted, or in cases where the accused suffers from a serious illness or dies.

Rights lawyer Cheng Hai said the newly expanded system deprives the accused of their right to a defense.

"The trials in absentia system is likely to create even more problems; as in a competition, there should be a level playing field between the parties," he said. "The whole point of a trial is that both sides get to express their point of view, and then the judge issues a judgement."

"Under this system, only one of the parties will get to put their case; the other party won't be there," Cheng said.

The move comes after the NPC set up the State Supervisory Commission in March to monitor the conduct of staff in the ruling Chinese Communist Party, People's Congresses, government departments, judicial agencies, state-owned enterprises, and government-backed institutions, including state schools and higher education.

The new system massively expanded the number of people under the watchful eye of investigators charged with seeking out corruption and abuse of official power to include contractors working for state and party organizations.

The new commission merges the functions of the Communist Party's internal Central Commission for Discipline Inspection, administrative supervisory agencies, and some functions of state prosecution services.

While the system, which is ranked higher than the Supreme People's Court and top prosecutor's office, was intended to replace the widely-criticized internal disciplinary system of the Chinese Communist Party, it is still incompatible with international human rights laws and standards, Amnesty International said at the time.