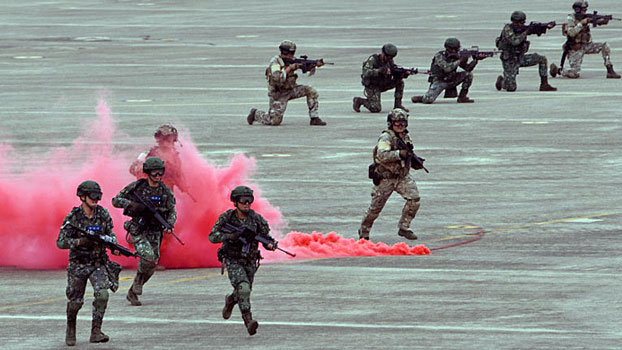 Taiwan on Thursday held live-fire military exercises off its coast amid concerns that Beijing could move to annex the democratic island, which has never been ruled by the Chinese Communist Party.

Off the west-coast city of Taichung, targets were set up to give firing practice to artillery units and assault helicopters, while the island's air force flew French-made Mirage fighter jets from its base at Hsinchu in the north.

The drills came as a new Pentagon report set out U.S. concerns about China's growing military might, including a possible attack on Taiwan.

A U.S. defense official told journalists that the Chinese Communist Party's determination to rule Taiwan in future is now at the top of President Xi Jinping's to-do list.

"Xi Jinping has made it clear that resolving or making progress, at least, on resolving ... the Taiwan situation is a very top priority for him," an article on the U.S. Department of Defense website cited the official as saying.

The article also cited senior defense intelligence analyst Dan Taylor as saying that the People's Liberation Army (PLA), the Communist Party's military arm, may soon have the military capability to carry out its aim of "unification," and annex the island.

“China is rapidly building a robust, lethal force, with capabilities spanning ground, air, maritime, space and information domains, designed to enable China to impose its will in the region, and beyond,” Taylor said.

“In the coming years, the PLA is likely to grow even more technologically advanced and proficient, with equipment comparable to that of other modern militaries,” he said.

Taiwan ordered fresh military drills after Taiwan president Tsai Ing-wen rejected calls from President Xi for the democratic island to move towards "unification" with the People's Republic, saying its people have no wish to give up their sovereignty.

"We exercise the way wars are fought ... so that we will be capable and confident in the defense of our country," Chen told journalists in Taipei on Wednesday. "We are ready to face an enemy threat at any time."

He said the military would fight to defend the sovereignty of the Republic of China, the official name of Taiwan since the 1911 Kuomintang-led regime fled to the island in 1949 after losing a civil war with Mao Zedong's communists on mainland China.

In a Jan. 2 "Letter to our Taiwan compatriots," Xi was insistent that China must be "unified."

"It has been a historical and unavoidable duty of the Chinese Communist Party, Chinese government, and the Chinese people to resolve the matter of Taiwan and unify the motherland ever since 1949," Xi said in the statement.

Xi made scant reference to public opinion among the 23 million inhabitants of Taiwan, and said that China would make no promises not to use military force to take the island.

A recent opinion poll found that more than 80 percent of Taiwanese would reject Xi's offer to rule the island via the "one country, two systems" model used for the former colonies of Hong Kong and Macau.

Tung Li-wen, an advisor to Taiwan ThinkTank, which conducted the poll, said most people have seen the erosion of Hong Kong's political freedoms and civil liberties since that city's 1997 handover to China, and concluded that they don't want the same thing to happen to them.

"Everything that has taken place in Hong Kong is a road-map of what Taiwan would look like under the Chinese Communist Party," Tung said. "They would do exactly the same things here."

"That's why there is no market for Xi Jinping's so-called peaceful unification under one country, two systems," he said. "I think every single person in Taiwan should stand firm and say no to the Chinese Communist Party ... I don't know why there are still some people in Taiwan who don't dare to say no to China; that's how difficult things are getting here."

In defense of democratic values

Tsai Yi-yu, a ruling Democratic Progressive Party (DPP) lawmaker, said that many in Taiwan hope that the island's defense of its democracy will be enough to ensure military backing from the U.S. and other democratic nations in the event of a Chinese invasion.

"There is an imbalance in Taiwan's military power, but ... a conflict with Taiwan would be an event of massive international importance," he said. "Unless China wants to take on all the democracies of the world, Taiwan’s defense of its democratic values is the biggest protective factor against a war in the Taiwan Strait."

"It would be pretty easy [for China] to take Taiwan, but then it would be subject to international isolation and sanctions afterwards," Tseng said. "That could stop or reverse its entire future development strategy and the Chinese dream of national rejuvenation."

Reported by Hsia Hsiao-hwa and Gu Jirou for RFA's Mandarin Service, and by Chung Kuang-cheng for the Cantonese Service. Translated and edited by Luisetta Mudie.

Oh boy Chinese are preparing to Kill Chinese now That will make some country happy and more offer to sell better high-tech Arms may come soon.

Why did the Taiwan people reject Chinese communism ? Because China specifying death penalty for Canadian drug criminal follows the push by Philipines Duterte of killing drug criminals. Savagery does not win hearts. Penalties such as death penalty must fit the crime. 15 years would have been plenty of punishment.