High-tech giants pledge to probe conditions at a factory plagued by suicides.
2010-05-28
Tweet 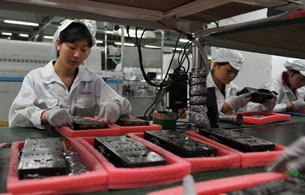 Workers inspect motherboards on a factory line at the Foxconn plant in Shenzen, May 26, 2010.
AFP

HONG KONG—A Taiwan-owned factory in China that supplies electronics to some of the world's biggest companies has announced a pay raise for staff after 12 of its employees attempted suicide, sparking calls for an investigation into its working conditions.

Foxconn, which saw its 13th suicide bid by an employee who slashed his wrists Thursday, announced the next day a 20 percent rise in salaries at its China plants.

An employee who answered the phone at the Shenzhen municipal police department declined to comment on the latest incident.

"We don't know the actual details here in the duty office," the employee said.

"I can't answer your questions because I don't understand the situation."

Requests to Foxconn for an interview were declined, with an employee saying that journalists must first undergo an application procedure.

Official media said police were still investigating the latest suicide attempt, in which a 25-year-old worker surnamed Chen, slashed his wrists in the early hours of the morning, but survived following medical treatment.

Chen's attempt followed 12 suicide attempts by Foxconn employees in the last year, 10 of them successful.

The suicides have sparked a flood of reports online about military-style discipline at the factory, owned by Taiwan's Hon Hai Precision Industry.

A Foxconn employee identified as Xiao Qin blamed long hours, a rigid regime, and abusive disciplinary procedures for the suicides, saying he too had considered ending his own life.

"There is really too much psychological pressure," Qin said.

"I'm not very strong, and I really feel that society has no place for me."

"[My family] are very worried. They call me all the time, every two to three days. Now it's every day. But I don't want to leave because I have a girlfriend who works here too."

Qin, who joined the company three years ago, said he typically works 11 hours a day, comprising three hours' overtime on top of the regular eight-hour shift.

He said that before the suicides, employees were working seven days a week, but that the company had brought in a six-day working week when the suicides began.

Foxconn assembly line workers typically earn around 1,600 yuan (U.S. $235) monthly, but the disciplinary system means that they risk losing some of their pay to fines if they break the factory rules, he added.

"They say grain is very scarce; that is their excuse," he said.

If caught wasting food, employees could face a formal warning.

"[If you are caught] and you have a good attitude, then they will give you a verbal warning. If it isn't good, they will put you on report," Qin said.

He said workers would be cursed and their pay docked if they made a mistake.

"If I made a mistake, for example if I failed to gauge the supply of materials correctly, I would be cursed out. It was nasty, and there were a lot of obscenities. They were very rude. I really can't take it. I'm here for the money. I don't want to be here."

Technology giants Nokia and Sony on Friday voiced concerns over conditions at Foxconn, pledging to look into conditions at the factory. Apple, Hewlett-Packard, and Dell have also vowed to investigate.

Hon Hai chairman Terry Gou toured the factory earlier this week and publicly apologized for the deaths, although he said they may have been linked more to personal problems than to the company's labor practices.

Taiwan media have reported that Foxconn plans to relocate some facilities and about a fifth of the Shenzhen workforce to western regions of China where many of its workers come from, so that they can be closer to home.

The island's Commercial Times quoted unnamed sources as saying that Hon Hai planned to invest hundreds of million U.S. dollars in northwest China and transfer around 80,000 workers back to Sichuan.

The suicides appeared to have eroded public trust in Foxconn, according to a recruitment officer for the company.

"Before [the suicides] things were all right," the officer said.

"There's barely a handful of people calling in the course of a day now," she said.

"Some of them are calling up to ask us how we run things here, or even to curse at us, for hiring people when there have been deaths here."

"It's not easy to be a recruiter for Foxconn right now. To put it bluntly, some people just don't trust us any more."