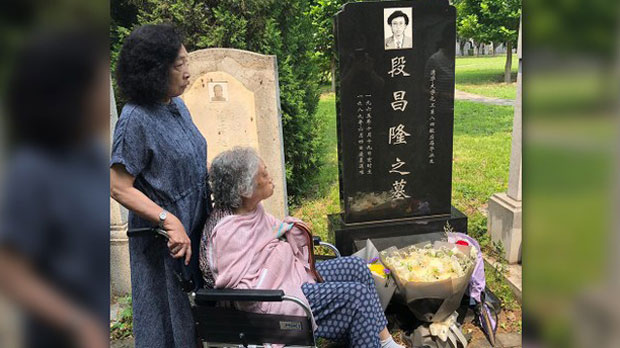 Chinese security personnel flooded Beijing's iconic Tiananmen Square on Tuesday, the 30th anniversary of the massacre of unarmed civilians by the People's Liberation Army (PLA) that put an end to weeks of peaceful, student-led protests.

One eyewitness said there was a bigger-than-usual security presence on the square, and not many tourists, with no public marking of the anniversary, amid an ongoing ban on such memorials by the ruling Chinese Communist Party, which styled the protests "political turmoil" and "counterrevolutionary rebellion" to justify the bloodshed.

Relatives of those killed in the massacre gathered at Beijing's Wan'an Cemetery, however, to pay their respects to their loved ones amid heavy surveillance and a complete lack of government response to their demands for a public inquiry and compensation.

"On this 30th anniversary, we are very heavy of heart," Huang said. "We gather here on the same day every year to lay wreaths for our loved ones who died in the June 4 bloodshed: Yuan Li, Duan Changlong, Hao Zhijing, Yang Minghu, Yang Yansheng, Wang Weiping, Guo Chunming, Wang Nan. We also extend our sincere condolences to all of the other victims."

Tiananmen Mothers spokeswoman You Weijie told RFA that the families of those who died have never healed from their grief.

"It still seems as if the tragedy of that year only happened yesterday," she said. "Though 30 years have passed, my feelings are still the same as they were back in 1989."

"Everyone talks about that day; maybe they saw their loved one shot to death, or they talk about their search for their loved one," You said. "They talk about it in great detail; not a single thing has been forgotten. This is a grief that will remain with every family, and in everyone's hearts, and from which we can never heal."

She said the decision by then-supreme leader Deng Xiaoping to use military force to suppress the demands for democracy, rule of law and an end to corruption had been a choice, rather than a necessary evil, as claimed by China's current leaders.

"If the government hadn't used such extreme measures as military force to put down the student movement back then, corruption would never have become as widespread in China as it is now," You said.

"If the government had been able to take on board the criticisms of its citizens, Chinese society would be far more open and civilized today."

But You said she still has hope.

"My main concern is that the parents [of those who died] will get to hear the truth about this tragedy during the time that they have left, and that the injustices done to their children will be set right. We hope that we will see a government apologize for the crimes perpetrated back then."

Group founder Zhang Xianling, whose 19-year-old son died in the military assault on Beijing that began on the night of June 3, 1989, said it is still unclear exactly why the order was given.

"Why did they send in field troops to kill students who were demonstrating peacefully?" Zhang said. "The government has acted deaf, dumb, and blind for 30 years, and tried to cover this thing up. But you can't cover up the truth about history."

She added: "Rest in peace, Wang Nan and all the other fellow citizens who died. There are only a few of us left now, but we will keep on fighting until the end."

A visitor to Tiananmen Square on June 4, 2019, who gave only her surname, Hu, described the scene on Tuesday:

"There were a lot of security personnel on Tiananmen Square, many times more than there usually are," Hu said. "There weren't very many tourists, though."

"Then they stopped letting people through, because they said the security machine for checking people's bags had broken down. So nobody could get into Tiananmen Square," Hu said.

"There were no really obvious memorial activities there this year. I didn't hear of anybody holding any kind of memorial event this year for June 4."

Rights activists said they knew of large numbers of dissidents and fellow activists who are currently being held under close surveillance, either at home or on enforced, out-of-town "vacations" in the company of state security police.

A Jiangsu-based rights activist and writer who gave only her surname Sun said the security measures appeared to have affected access to circumvention tools designed to get around government censorship online known as the Great Firewall.

"A lot of people tried to post photos to commemorate June 4, for example with candles, but they couldn't," Sun said. "Some people could only use very hidden meanings to commemorate the students and citizens of June 4, and just hoped that the souls of the dead in heaven would hear them."

And a democracy activist who gave only her surname Zhao told RFA that she and fellow activists had held a 24-hour hunger strike to mark the anniversary.

"Today is a day to remember June 4 and the heroes who sacrificed their lives on Tiananmen Square," she said.

The overseas-based Chinese Human Rights Defenders (CHRD) network said Beijing has tried to "systematically erase" the history of the 1989 pro-democracy movement and its bloody suppression.

"Authorities purge from the domestic internet words like 'Tiananmen' or 'June 4th.' Taboo-breakers risk jail," the group said in a statement on its website.

"Today, under Xi Jinping’s draconian rule, it might be difficult to imagine any Tiananmen-style mass protests taking place in the heart of Beijing," CHRD's director Renee Xia said in a commentary.

"A Tiananmen-inspired yearning for freedom and the determination to bring about democracy, however, lives on in many hearts and minds," Xia wrote, citing thousands of protests that take place annually in China against labor abuses, forced evictions, pollution, unpaid pensions, or skyrocketing medical costs.

Reported by Gao Feng and Qiao Long for RFA's Mandarin Service, and by Wong Lok-to for the Cantonese Service. Translated and edited by Luisetta Mudie.