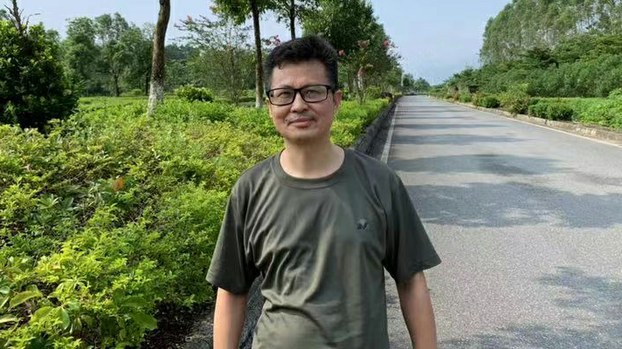 Guo Feixiong after being released from Yingde Prison in Guangdong province, Aug. 7, 2019.

Authorities in the southern Chinese province of Guangdong have released prominent rights activist Guo Feixiong at the end of his six-year prison sentence for "subversion."

Guo's U.S.-based wife Zhang Qing said Guo was released from Yingde Prison on Wednesday, where he was greeted by relatives.

"We're very happy that he is out, though," she said, adding that Guo had been experiencing some worrying symptoms.

"He has had blood in his stool on and off for the past year or more," Zhang said. "But when they examined him, they humiliated him, so the whole thing has been extremely tough."

"His family is pretty happy that he has gotten out at all," she said.

Guo told RFA he didn't have any obvious health issues, however.

"As for whether I am genuinely safe, we'll know in two or three days' time," he said in an interview on Wednesday. "I was held in three different locations during the past six years, and nothing happened to me in the first or the third, but something did happen in the second place, but I don't want to talk about that now."

"Right now I have to figure out how to get an ID card, and I will be meeting with my lawyer Zhang Wei to deal with that," he said. "We will have to see if I can get an ID card in a normal manner like everybody else."

"I want to leave everything that happened in the past, in the past, and look to the future; make something of the future," he said. "We want to move gradually in the direction of political reforms, with a democratic system as a final goal."

Guo added: "I would like to solemnly urge [President] Xi Jinping, [premier] Li Keqiang and Li Zhanshu to take three steps to enable those political reforms in China: the first is for the National People's Congress to ratify the International Covenant on Civil and Political Rights, to enable press freedom, and to roll out trial county-level elections in 100 counties across China."

Guo, whose birth name is Yang Maodong, began a hunger strike 2016 after being subjected to a forced rectal cavity search at the instigation of state security police, as well as forced head shaving and verbal abuse from prison guards, rights groups have said.

He was later transferred from Yangchun Prison to Yingde after refusing food and water for more than 100 days in protest at his treatment.

"Judging from the way he sounded, his mental state isn't bad, and he said he was very glad to be relatively unscathed," Sui said. "After all, he was tortured many times the last time he was in prison."

"It's very good news, as long as he doesn't have any major health problems," he said.

Guo was jailed for six years by the Guangzhou Intermediate People's Court on Nov. 28, 2014, after prosecutors added a new charge at the last minute that effectively forced him to serve the whole of his jail term without counting time already served.

His co-defendant Sun Desheng was released on Monday after his time served in pretrial detention was taken into account.

According to the indictment at the trial, the initial charge against Guo was based on his participation in anti-censorship demonstrations outside the cutting-edge Southern Weekend newspaper offices in Guangzhou in early 2013, where he held up a placard and made a speech in favor of press freedom.

In January 2013, activists, journalists and academics faced off with the authorities after the Southern Weekend newspaper was forced to change a New Year’s editorial calling for political reform into a tribute praising Communist Party rule.

Guo's placards called on officials to publicly disclose their assets and for the Chinese government to ratify the International Covenant on Civil and Political Rights, which it signed in 1998.

Sui said Guo will likely be looking to continue his activism on his release.

"He won't be able to give it up, but his friends have advised him to keep a low profile, and rest up, and not to take part in too many things," Sui said.

"After such a long period in jail, he is bound to be a bit disconnected from social reality, and there needs to be a period of adaptation," he said.

Sui's "release" also looks set to follow patterns set in previous cases, with the former prisoner prevented from slotting back into their old life and forced to move back to the town of their "hukou," or household registration, where they are often closely watched by police.

Asked if Guo would be reunited with his wife and child, who fled to the U.S. several years ago, Sui said it was unlikely for the time being.

"That's going to be difficult," Sui said. "As his friends, we definitely would want him to go to the U.S. to see his wife and child, but it is pretty difficult, I guess."

"Also, Guo Feixiong is reluctant to leave the country, as he is worried that he won't be allowed back in once he leaves," he said.

Reported by Ma Lap-hak and Fok Leung-kiu for RFA's Cantonese Service, and by Gao Feng for the Mandarin Service. Translated and edited by Luisetta Mudie.