A Chinese rights lawyer 's conviction for 'fraud' is thrown out, but she remains in prison on another charge.
2012-07-27
Tweet 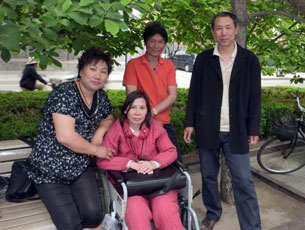 A Beijing court on Friday overturned a fraud conviction handed down earlier to a disabled rights lawyer, but upheld a conviction on a second charge, reducing the wheelchair-bound activist’s sentence by only two months.

Beijing lawyer and eviction activist Ni Yulan, 52, had been sentenced in April to a two-year prison term following her conviction on charges of “fraud” and “causing a disturbance” by the Xicheng District People’s Court.

Her husband, former schoolteacher Dong Jiqin, was also convicted of creating a disturbance and was handed a two-year term.

Beijing authorities had earlier revoked Ni’s business license because of her work on behalf of city residents evicted to make way for development linked to the 2008 Olympic Games.

And though prosecutors alleged that she had afterward illegally represented herself as a lawyer, the court ruled today that money given her by clients were not fees but donations.

“The judge accepted the evidence we provided, and therefore her original sentence was reduced by two months,” Ni’s lawyer, Cheng Hai, said.

Police turned out in force on Friday to cordon off the area around the court and discourage demonstrations by supporters, witnesses said.

“Two roads leading to the court were all blocked by police, and all vehicles were stopped,” Han Ying, a Beijing-based activist who tried but failed to get into the court, told RFA.

“There were also many police at a nearby subway station,” she said, adding that microblog reports said many riders were searched when they emerged from the station.

“There were about 30 supporters near where I stood, but we were not allowed to stay. We were all dispersed,” she said.

Ni Yulan’s daughter Dong Xuan said the court had allowed only one family member to go inside.

“When my uncle and I arrived near the front door of the court, a staffer said that we had come too late and that there was a seat in the observers’ gallery for me, but no seat for my uncle.”

However, only one other person was seated in the gallery when she arrived, she said.

“I didn’t know her,” she said. “[Defendants’] relatives should be given priority for seating.”

Dong described her mother’s face, neck, and lymph nodes as “swollen, very obvious” during her appearance in court.

“[But] mother told her lawyer that she was brought to the hospital only once because of problems with her feet and waist, and not for treatment of her lymph nodes,” she said.

Ni Yulan is confined to a wheelchair as a result of beatings and torture at the hands of police, and suffers various other health problems.

Authorities detained Ni and her husband, who were evicted from their own home in 2008, just over a year ago amid a nationwide roundup of dissidents and activists sparked by online calls for a “Jasmine Revolution” inspired by the Arab Spring protests in the Middle East.

“They were forced to stay in a hotel by the police,” Cheng Hai, Ni’s lawyer, said. “And then it was said that they had not paid the costs of their stay.”

“This was an intentionally fabricated case. It should be said that the police committed the crime, not them.”

Reported by Gai Leisee for RFA’s Cantonese service and by Xin Yu for the Mandarin service. Translated by Shiny Li and Feng Xiaoming. Written in English by Richard Finney.