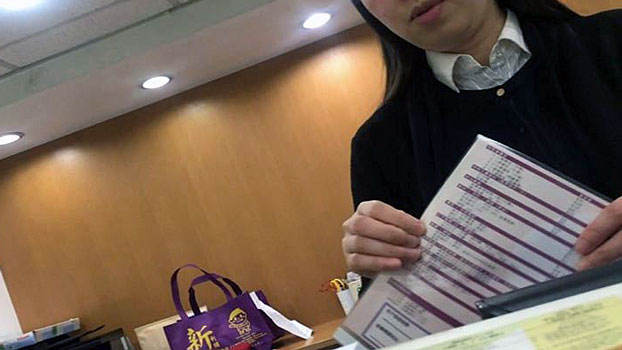 An employee at a firm providing business registration services in Hong Kong's central business district produces a document with procedures for mainland Chinese to open shell companies, saying that her firm would not ask any questions, December 2018.
RFA

And exiled Hong Kong media boss Gu Zhuoheng tweeted this week that he will reveal details of a tangled web of corporate assets owned by President Xi Jinping's family and other elite Chinese families, 3,000 of which are based in Hong Kong.

According to the Companies Registry, around 1.4 million companies are domiciled in Hong Kong, with some 140,000 new firms registering every year from 2014 to 2017.

The registry also sees around 800 registrations of overseas-domiciled companies' Hong Kong subsidiaries, although it recorded more than 1,000 such registrations from January to November 2018.

Anyone can set up a company in Hong Kong via the E-Registry website, or via a licensee who provides registration services to trusts and companies.

Hong Kong is home to more than 6,000 of such service providers, charging a wide range of services for varying fees.

Some offer to set up a company free of charge, only adding service charges later if further tasks are required. Fees can range from 6,000-30,000 Hong Kong dollars (U.S. $760-3,800), a December investigation by RFA revealed.

Some offer virtual offices, the use of a Hong Kong address for registration, mail collection and telephone answering services.

Same across the board

Several licensees responded to inquiries on the part of a fictional mainland Chinese businessman who was unable to travel to the city in person, and who wished to set up a company there.

Their replies were the same across the board: All applicants need is a photocopy of their Chinese ID card and proof of address through a third party or by e-mail, and to complete a declaration form for submission to the city's government.

Such a person could set up a Hong Kong-based company in as little as five days or a week, they said. No verification of signatures or in-person applications are required, and falsified or borrowed ID would be hard to discover.

"You don't have to come in person. You can just provide a photocopy of their ID and proof of address," an employee who answered the phone at one service provider in the central business district told RFA in December.

"There is no stipulation that you have to have any employees or an account at a Hong Kong bank," she said.

She said that since a government crackdown on the practice, some people were now using shell companies as a substitute for offshore companies domiciled in the British Virgin Islands (BVI), as a way of avoiding tax.

"This is a BVI company," she said. "Offshore companies aren't domiciled in Hong Kong, but in the British Virgin Islands."

She added: "In the past, people used to use these companies a lot to evade taxes, but now it’s harder to open bank accounts there, so our clients are using shell companies [in Hong Kong] more than they are using offshore companies." 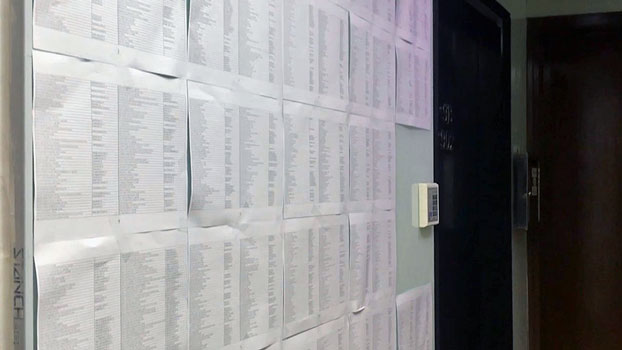 Sheets of paper tacked to the outside wall of an empty office unit in Hong Kong's Sheung Wan area in December 2018 list more than 1,800 firms that are likely shell companies using the location as their main business address. The office is just down the street from a company providing business registration services to mainland Chinese. Credit: RFA

Documents for a fee

Asked if companies are required to show proof of operation after being set up, all of the service providers contacted by RFA said they could provide the necessary documents for a fee, and the government was unlikely to check.

One service provider in the central business district offered a variety of service packages, starting with the most basic fee for setting up private, limited liability company.

Apart from administrative services like mail collection and phone-answering, an additional fee could ensure that no questions were asked about whether the company had any operations.

"If you do not open a bank account, as long as you pay the fees, the government will not pay any attention to you," an employee told RFA.

"The government won't care if you don't do any business, as long as you pay its fees every year," she said.

At an address registered to one licensee company in Sheung Wan, a total of 1,867 company names were listed on 38 sheets of A4 paper tacked to the wall — likely shell companies using the address for registration.

The address was just down the street from the registered address of the licensee.

Attempts to inquire about one shell company that had been under investigation in connection with a pyramid scheme in recent weeks met with no success.

"We have many [customers] ... and we are only responsible for setting up the company for them, and providing annual returns," an employee at the company's service provider told RFA. "But we don't know what they do, and we don't check them individually."

"If you can't find [this company], I don't think we will find it," she said. "We only communicate with them via e-mail."

‘It will have an impact’

Last March, the Hong Kong government passed a new amendment to the Companies Ordinance to adopt a licensing system for such service providers.

The key requirements for licensing operations are that the licensees must carry out due diligence on their clients.

Chu Yiu-kwong, director of Weitong Registration Co., a licensee, said Hong Kong's status as an international financial company could be affected by the accusations against Huawei's Meng Wanzhou, who is accused of using a Hong Kong-based shell company to disguise Huawei's dealings with Iran.

"It will definitely have an impact, because this incident is all about using Hong Kong companies ... and Hong Kong bank accounts to conduct illegal transactions," Chu said.

"It is likely that ... both the United States and the United Nations will require Hong Kong to take more measures, which will make life more difficult in other ways, and the Hong Kong government and banks will be more strictly regulated," he said.

Democratic Party lawmaker and former corruption investigator Lam Cheuk-ting said the relaxed attitude towards business registrations is part of a long-term pro-business stance on the part of the Hong Kong authorities.

"In particular [we need to look at] the regulation of these companies offering secretarial services ... We should take a multi-pronged approach," he said.

"Penalties should be strengthened if the operations of these shell companies pose a significant risk, or cause large-scale financial losses," Lam said. 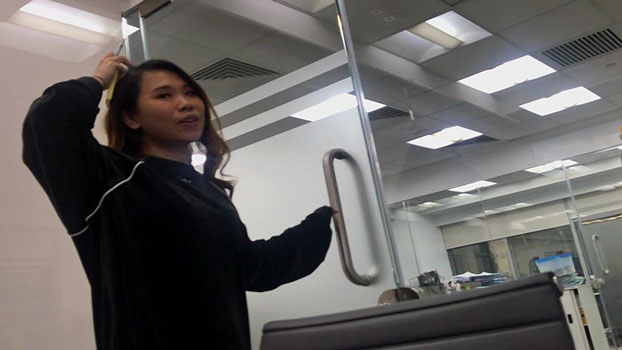 An RFA reporter who visited a Hong Kong business registration firm in December 2018 to inquire about a shell company it registered that had been investigated in connection with a pyramid scheme was told by an employee that her firm is only responsible for setting up companies for clients and providing their annual returns. Credit: RFA

‘The US has concerns’

However, details have emerged since Meng's arrest surrounding Skycom, a Hong Kong-registered company that Huawei denies controlling and U.S. investigators say was covertly controlled by the company.

The appearance of a Hong Kong-registered company at the heart of a major financial fraud allegation and international diplomatic incident has put the spotlight firmly on Hong Kong's ability to regulate companies in keeping with international standards.

Civic Party lawmaker Au Nok-hin said part of the problem appears to be a lack of transparency on the part of the government itself.

"In the case of Skycom, we have to wonder whether the Hong Kong government was lacking in enforcing the law," Au said.

He said many in Hong Kong fear that the city could lose its separate trading status, based on promises made by Beijing that it would continue to operate as a separate jurisdiction after the 1997 handover to China.

"The U.S. already has concerns over whether Hong Kong has already become the same as China, or whether it is being used as a center for arm's length laundering of money with a Chinese government background," Au said.

"If the U.S. suspects that there are loopholes like this operating in Hong Kong, then the fear is that they will no longer extend special treatment to Hong Kong," he said.