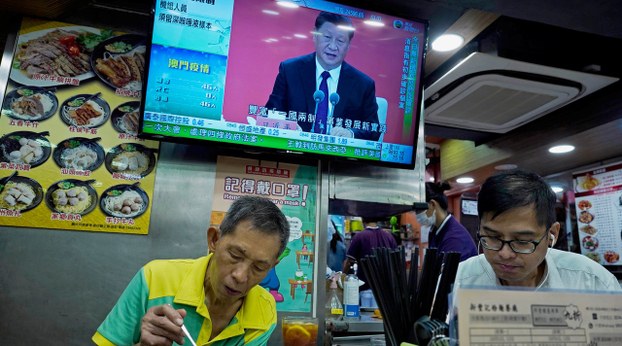 Chinese President Xi Jinping is seen on a TV screen in Hong Kong on the 40th anniversary of the establishment of the Shenzhen Special Economic Zone, Oct. 14, 2020.

Ruling Chinese Communist Party general secretary Xi Jinping on Wednesday laid out plans to have the mainland Chinese city of Shenzhen at the heart of an integrated economic zone that will include the former colonial cities of Hong Kong and Macau.

Shenzhen will provide the "engine" for the development of the Greater Bay Area, Xi said in a speech marking the 40th anniversary of the city's founding as a special economic zone (SEZ).

Regulations and institutions in Hong Kong would be "aligned" with those in neighboring Chinese cities, Xi said.

"With Shenzhen being an important engine in its development, we should seize the major historical opportunities in the development of the Greater Bay Area, promote the alignment of economic rules, and institutions of Guangdong, Hong Kong and Macau," he said.

"We should also continue to encourage and guide our compatriots in Hong Kong, Macau, and Taiwan as well as overseas Chinese, to play their important roles in investment, entrepreneurship and two-way openness," Xi said.

He said there would be a political leadership role for Shenzhen in promoting Xi's personal brand of political ideology.

"Shenzhen will also take the lead to realize socialist modernization, this is the historical mission of Shenzhen given by the party in a new era," the president said, referring to Xi Jinping Thought on Socialism with Chinese characteristics for a New Era.

The announcement suggests that Hong Kong will be sidelined as Beijing's focus turns to Shenzhen, which has already provided a base for Chinese leaders to supervise developments in the former British colony, which was rocked by months of anti-extradition protests and pro-democracy demonstrations in 2019.

Shenzhen would be given a role in relation to Hong Kong, Xi said during a visit to the city, but gave no further details.

Hong Kong chief executive Carrie Lam on Monday gave late notice that her annual policy address would be postponed so she could attend the anniversary event in Shenzhen, and learn about new policy developments coming from Beijing.

Chinese economics commentator Jin Shan said Hong Kong and the former Portuguese colony of Macau would likely be included in Xi's plans to move to a socialist command economy.

Xi's ideas "are of a piece with traditional notions of a planned economy," Jin said. "This actually goes in the opposite direction to the reforms and opening up [of late supreme leader Deng Xiaoping] and market economics."

"The premise of openness is that a society, government, and the markets are under the rule of law, as a guarantee to achieve a prosperous market economy," he said.

"They want to divert power away from Hong Kong and center mainland China," Liu said. "When they are done ridding Hong Kong of its value, Hong Kong will die a natural death."

Law Ka-chung, a former Bank of Communications analyst and economics professor at Hong Kong's City University, said Beijing will achieve that with a massive injection of funds into Shenzhen's high-tech industry.

"Shenzhen is all about developing high-tech, but Hong Kong can't afford to do that because it has had a financial reversal of fortunes," Law said.

Law said the Sino-U.S. trade war had led to a drain on Hong Kong's U.S. dollar liquidity, once a key selling point of the city as a financial center.

"The Hong Kong Monetary Authority’s U.S. dollar foreign exchange reserves have fallen from 46 or 47 percent to 41 or 42 percent," Law said. "There has been a sharp fall recently, as a proportion of funds are being drained."

Law said Xi seems to have decided to develop China's own currency, the renminbi, as an international reserve currency instead.

"If they want to build their own financial center, then it's going to be Shenzhen," he said.

The next 'world city'

"Shenzhen's GDP has already outstripped that of Hong Kong, which isn't the kingpin of the Greater Bay Area economic development plan, because you can't have areas of slower growth leading areas of faster growth," Chong said.

"Hong Kong was never going to be the lead city in the plan."

Chong said Shenzhen could struggle with the free movement of capital in and out of renminbi, however, in comparison with Hong Kong, with its freely convertible, U.S.-dollar-linked currency.

It could also struggle attracting international talent, he said.

"How many foreigners are going to want to relocate to Shenzhen?" Chong said. "Can they cut banking and communications costs? These are all things they could do as a city."

He said dispute resolution was unlikely to be better in Shenzhen than in Hong Kong, where an independent judiciary was once cited as a key attraction for investors in the city.

"Perhaps they could use Hong Kong procedures," he said.

Reported by Tseng Yat-yiu, Chan Jeon-nam and Lau Siu-fung for RFA's Cantonese Service, and by Gao Feng for the Mandarin Service. Translated and edited by Luisetta Mudie.