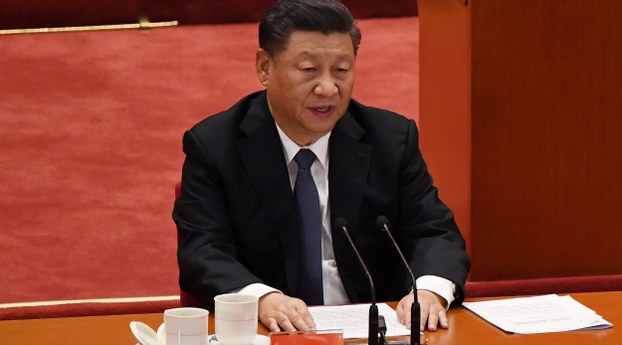 China's President Xi Jinping speaks at a ceremony in the Great Hall of the People in Beijing, Oct. 23, 2020.

Authorities in Beijing tightened security on Monday, taking dissidents on out-of-town trips, as the ruling Chinese Communist Party (CCP) met to change the course of Chinese economic policy for the first time in four decades, RFA has learned.

"They have started taking a lot of people out of town for the fifth plenum, on 'vacation,'" Zha said. "Sorry, I can't give an interview now, because I have to leave shortly."

Dissident Qi Zhiyong, who has been disabled since his legs were crushed by a tank during the 1989 Tiananmen massacre, said many other critics of the CCP are being forced to leave town.

"Zhai Yanmin and He Depu have already left, I heard," Qi told RFA on Monday. "He Depu went to Guizhou, Zhai Yanmin I think is going to Henan, and Zha Jianguo refused to travel ... so he may be taken to the suburbs."

"I think Li Wei may be staying at home under surveillance."

Plenary sessions, or plenums, continue the work of the previous Party Congress, and are attended by some 400 members and alternate members of the full Central Committee.

General secretary Xi Jinping will deliver a keynote speech, and the topics under discussion will be focused on the 14th Five-Year Plan.

Since the CCP took power in 1949, fifth plenums have typically focused on economic policy, and this one looks unlikely to break with that tradition, analysts told RFA.

Ding says Xi -- faced with a trade war with the U.S. and the global impact of the coronavirus pandemic -- is moving China to a "circular economy" under state control, and away from the export-based model that has fueled its rapid growth since 1979, when late supreme leader Deng Xiaoping ushered in four decades of market-based economic policy.

"[They are planning] a circular domestic economy linked to a limited foreign trade bubble that only includes smaller countries in Asia, Africa, and Latin America, where they are still operating cash-based diplomacy," Ding said.

Ding said there is a widespread expectation that Xi will change the current system of property ownership, although details have yet to emerge.

"The next step has to be to decide which system of ownership they will use, otherwise it will cause a panic, and people won't know what to do," he said.

"But overall, the state will take a larger role, and the private sector a smaller one; that's the long-term goal," he said.

Li Junru, a former vice president of the Central Party School, said to the state-run China News Agency that this plenum will be an unusual one, as it will set the agenda for the next Five-Year Plan as well as the next three decades of "modernization."

But former Tsinghua University politics lecturer Wu Qiang said that top personnel changes will also be discussed ahead of the 20th Party Congress scheduled for 2022.

"There will be discussion at the fifth plenum of who to select for the Politburo of the 20th Party Congress, and [those selections] will come out of this meeting," Wu said.

"There will also be negotiations and horse-trading between the central leadership and regional bureaucracies over the 14th Five-Year Plan, because all of these things are closely bound up together."

Last week, state-run Xinhua New Agency and CCP official newspaper the People's Daily made major changes to their leadership, just days ahead of the fifth plenum.

Li Baoshan -- a member of the Communist Youth League faction around former president Hu Jintao -- has been replaced by pro-Xi authoritarian propagandist Tuo Zhen as editor-in-chief of the People's Daily, while He Ping will succeed Cai Mingzhao as president and party secretary of Xinhua.

Both outgoing leaders had reached the official retirement age of 65, but rumors have long swirled around Cai, linking him to involvement in a number of recent corruption trials of high-ranking officials and even of involvement in an unconfirmed coup attempt spearheaded by former security czar Zhou Yongkang and former Chongqing party chief Bo Xilai, both of whom are now in jail.

He Ping is also a key Xi ally, believing that the Chinese state media should consolidate CCP propaganda, ideology and cultural positioning, as well as strengthening its ability to guide public opinion.