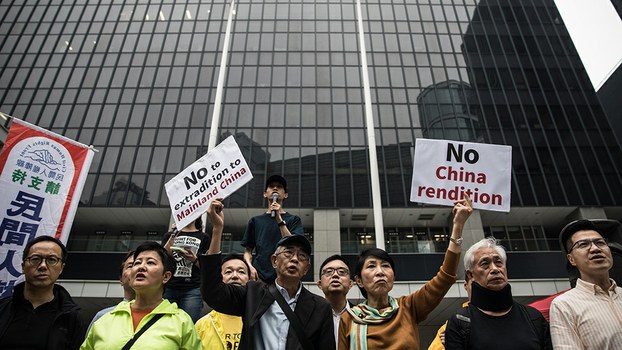 Protesters display placards rejecting plans to allow extraditions to the Chinese mainland outside government headquarters during a rally in Hong Kong, March 31, 2019.

The Hong Kong Journalists' Association on Friday called on the city's government to shelve changes to its extradition law that would enable the rendition of alleged criminal suspects to face charges in mainland China.

"We must stand up and call on the government to withdraw the amendment of the controversial Fugitive Offenders Ordinance," the groups said in a statement on its website.

"As professional journalists ... our higher calling is to defend freedom, fight for justice and tell the truth," it said.

The statement cited statements from high-ranking ruling Chinese Communist Party officials who have opposed any separation of powers in China, leaving the country's court system open to political control.

It said journalists in particular have already been targeted for political reasons in China, using "baseless allegations ... including possession of drugs, smuggling, bribery and fraud."

Under the planned amendments to the Fugitive Offenders Ordinance, China would be able to request the extradition of an alleged suspect based on the standards of evidence that currently apply in its own courts, the HKJA said.

"We know it is very difficult for the chief executive to say no to the central government," the HKJA said.

The group joined opposition politicians in dismissing recent changes to the bill as tinkering around the edges.

Lam's administration announced on Thursday that it would strike from the list of extraditable crimes any that carried less than a minimum jail term of seven years. In an earlier version of the bill, crimes carrying prison sentences of three years or more had been included.

The amendments to the city's Fugitive Offenders' Ordinance have also been amended to require any extradition request to come from a country's highest authority; a move that has potentially jeopardized an extradition case involving Taiwan that Lam originally said was the justification for the unpopular plan.

"The government’s amendments to the extradition bill fail to remedy its fundamental flaws," the HKJA said. "The bill, if passed, [will allow] the transfer of people to countries that do not have fair trial systems, where they may face torture, inhuman or degrading treatment."

Civic Party lawmaker Alvin Yeung said the changes had done nothing to allay concerns that sending alleged suspects back to China at the ruling Chinese Communist Party's request would undermine any human rights protections they enjoyed in Hong Kong, weakening the city's reputation for judicial independence and human rights.

"These changes are merely amendments to court processes, not substantive changes in the [proposed] law," Yeung told reporters.

"The people who will be taking part in the protest [against the extradition law] on June 9 don't understand [why this is happening], and they have been misled all along," To said. "We are really very worried and we think the government should slow down and discuss this in more detail."

"How many people will it take to come out in protest for the government to withdraw this political decision?"

Last month, thousands of people took to the streets in protest at the planned amendment to existing laws, which will allow the Hong Kong government to grant extradition requests on a case-by-case basis with no meaningful judicial oversight, to countries with which it lacks an extradition treaty.

The most likely jurisdiction to use the proposed provision is mainland China, which currently has no formal extradition treaty with Hong Kong.

Opposition groups are planning a demonstration against the proposed amendments on June 9.

According to government broadcaster RTHK, the two changes to the bill were requested by the business community and pro-Beijing lawmakers.

"They weren't satisfied by earlier concessions made when several types of economic crimes were stripped from the list of extraditable offenses," it said.

The HKJA said the proposals, if passed, would be "a sword hanging over the head[s]" of the city's journalists, who could easily be targeted by Chinese officials for prosecution if they write something that displeases the ruling party.

"There will be no freedom of expression if there is no freedom from fear," the group said. "We can see clearly [that] the last firewall between Hong Kong and the mainland will vanish if the bill is passed into law."

Chinese foreign ministry spokesman Geng Shuang told journalists in Beijing that the amendments are necessary to "close legal loopholes," without specifying what they were.

"The central government fully supports the government [of Hong Kong] in revising the relevant regulations and its position is very clear," Geng told a regular news briefing in Beijing.

He called on the outside world to "stop interfering in Hong Kong's affairs."