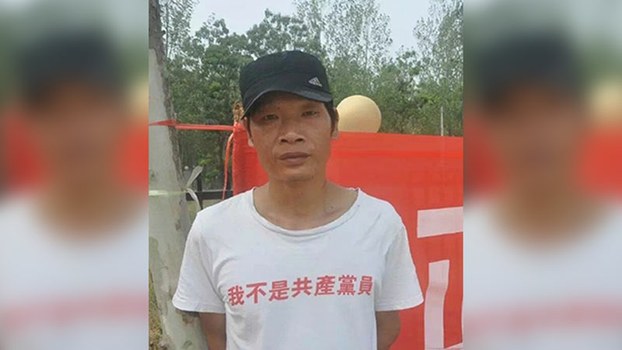 Chinese legal activist Chen Jianxiong, who was handed a three-and-a-half year prison sentence for "picking quarrels and stirring up trouble" on Aug. 12, in undated photo.

A court in the central Chinese province of Hubei have handed down jail terms of up to three-and-a-half years to two rights activists who complained of state security police interference in their lives.Legal activist Chen Jianxiong was handed a three-and-a-half year prison sentence on Monday by the Chibi People's Court, after it found him guilty of "picking quarrels and stirring up trouble," his lawyer said.Chen's co-defendant Yuan Bing was sentenced to three years' imprisonment on the same charge."This was about stuff he wrote online, and also about some rights activism that he engaged in," Chen's lawyer Ma Gangquan told RFA on Tuesday.But he declined to comment further."If I give you too much information, then there may be an issue with my being able to meet with my client in future," Ma said. "If they refuse to let me meet with him, that'll be a big problem."Chen's girlfriend Liang Yiming said Chen and Yuan were both deeply unhappy with the verdict and sentences."He will definitely be appealing this," Liang said. "Actually, appealing is really only symbolic ... there's not much likelihood of the appeal court overturning this."She said the sentencing had been carried out by court officials at the Chibi Detention Center, where Chen and Yuan have been held since October 2017."There wasn't a hearing or anything of that sort," Liang said. "They just sent over the judgment, and showed it to them: extreme persecution is the norm for the authorities, who want to make you afraid, and if you're not, they beat you down until you are."Yuan Xiaohua, a close friend of Yuan Bing's, said both activists had engaged in street protests as well as online posting on human rights issues, but always within the law."The sort of activism they did was within the framework of the law," Yuan Xiaohua said. "They were just exercising their legal rights as citizens."He said Yuan and Chen had showed up at the offices of the local state security police in October 2017, and gotten into a verbal dispute with officers over "stability maintenance" restrictions ahead of the ruling Chinese Communist Party's 19th National Congress.The altercation came after state security police went Yuan Bing’s son's school and spoke to his son and his son’s teachers."This was the authorities' revenge," Yuan Xiaohua said, adding: "I think the sentence ... and the level of persecution directed at citizens carrying out legal activities was inappropriate and clearly illegal," he said.An employee who answered the phone at the Chibi People's Court confirmed that sentence had been passed on Chen and Yuan, but hung up without giving further details."The judgment has now been made public and delivered [to the defendants]," the employee said.Liang, Chen and Yuan were initially detained in October 2017, ahead of the 19th Congress of the ruling Chinese Communist Party, after taking issue with state security police restrictions on their activities and freedom of movement.Liang was released on bail, but Chen and Yuan remained in custody.Reported by Wong Lok-to for RFA's Cantonese Service, and by Gao Feng for the Mandarin Service. Translated and edited by Luisetta Mudie.