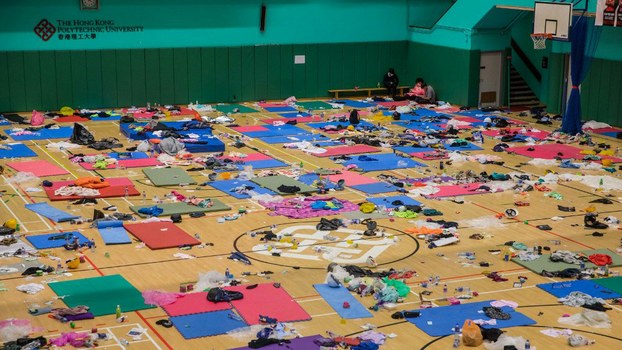 A dwindling core of protesters rest inside a sports hall after days of siege at Hong Kong Polytechnic University in Hong Kong, Nov. 21, 2019.

Beijing on Thursday called on U.S. President Donald Trump to veto a law aimed at protecting the human rights of Hong Kong's 7.5 million residents, threatening to retaliate if the president signed it into law.The U.S. House of Representatives passed the Hong Kong Human Rights and Democracy Act, which requires an annual review of Hong Kong’s human rights situation and sanctions against officials linked to rights abuses in the city, on Wednesday. To become law, the bill must be signed by President Trump, and White House officials have indicated that this will happen."We urge the U.S. to grasp the situation, stop its wrongdoing before it's too late, prevent this act from becoming law (and) immediately stop interfering in Hong Kong affairs and China's internal affairs," foreign ministry spokesman Geng Shuang told a regular news briefing in Beijing."If the US continues to make the wrong moves, China will be taking strong countermeasures for sure," Geng said.Congress also passed measures banning the export of non-lethal crowd-control weapons including tear gas, pepper spray, rubber bullets, water cannons, stun guns and tasers.The bill passed as around 100 people remain trapped on the campus of the Hong Kong Polytechnic University (Poly U) after police warned that all adults leaving the premises would be arrested on suspicion of "rioting."Lawmaker Ip Kin-yuen, who represents the education sector in the city's Legislative Council (LegCo), has been helping protesters leave the building safely, said many of those left behind were trapped there because the window given by riot police for them to leave was too short."Some of them told us that they have been trapped inside because the time that was allowed to let them leave was too short. And that was the time when there was a lot of conflict between the protesters and police," Ip told government broadcaster RTHK on Thursday. "So they could not leave before the time limit set by the police."They include a visiting insurance agent and several Poly U staff, he said.Ten protesters walked out on Thursday and were taken to a police post, while three were carried out on stretchers and four taken in wheelchairs. Five other students, believed to be minors, came out with their parents and were allowed to leave after police took their details, the Associated Press reported.Worsening hygiene conditions

Democratic Party lawmaker Ted Hui said at least 100 people remain in Poly U, spread out over different levels, amid worsening hygiene conditions and huge psychological pressure."I am very worried [about them because] they feel that they haven't done anything wrong, and yet they are being treated this way by society and the police," Hui told RFA. "Some of the frontline fighters are feeling that they are as good as dead, and want to die."He said the safest way to resolve the standoff would be for police to back off and give those left behind time to leave of their own accord."The safest way for these people is to get the police to withdraw first, and they might dare to come out," Hui said. "I think this is the most humane approach."He said police hadn't insisted on keeping up pressure for days on end with previous clashes. "Why now are they breaking with the previous [way of doing things]?" he said.Poly U student spokesman Owan Lee hit out at a public warning given by security secretary John Lee that all of those still inside Poly U would be arrested on suspicion of "rioting.""This is totally unacceptable, and John Lee's pronouncement goes entirely against the spirit of the rule of law," Lee said. "Everyone should be presumed innocent until found guilty, so he doesn't get to pronounce these people guilty.""It just goes to show the weak legal understanding of top Hong Kong officials, who are just trying to scare the people of Hong Kong, to ensure that they live in fear," he said. "He isn't competent to hold a top government position."Experts said ongoing trade relations between Beijing and Washington will likely be affected if the new legislation becomes law.Independent scholar Tang Wanping said Beijing won't agree to anything in the context of trade talks that affects the stability of the ruling Chinese Communist Party's grip on power."What they really care about is protecting themselves and their regime," Tang said. "So they won't agree to any conditions as part of the Sino-US trade negotiations that affect that.""They won't accept any option that is detrimental to the stability of the regime."Chinese officials directly affected

Zhang Yongqiang, an independent scholar from the northern province of Hebei, said the fact that the Hong Kong Human Rights and Democracy Act would require sanctions in the form of asset freezes and visa restrictions on senior officials deemed responsible for human rights violations in Hong Kong is anathema to Beijing."This affects their interests very directly," Zhang said. "Some high-ranking officials have property and family in the United States, and would be cut off from them, should the U.S. refuse them a visa.""This will be a direct blow to them," he said.Hong Kong chief executive Carrie Lam formally withdrew a planned amendment to the city's extradition laws last month, fulfilling the first of the protest movement's five demands, after five months of mass popular uprising and peaceful marches.But protesters say they will continue until there has also been an amnesty for thousands of people arrested, the withdrawal of the official term 'rioting' to describe the movement, an independent inquiry into police violence against protesters, and fully democratic elections to the Legislative Council and for the post of chief executive.Government officials have repeatedly ruled out these measures, while calling at the same time for "dialogue" with protesters.In recent weeks, calls have been growing for the current Hong Kong police force to be disbanded, particularly after widespread reports of the sexual abuse and torture of detainees at the hands of police.Reported by Pan Jiaqing for RFA's Cantonese Service, and by Qiao Long for the Mandarin Service. Translated and edited by Luisetta Mudie.