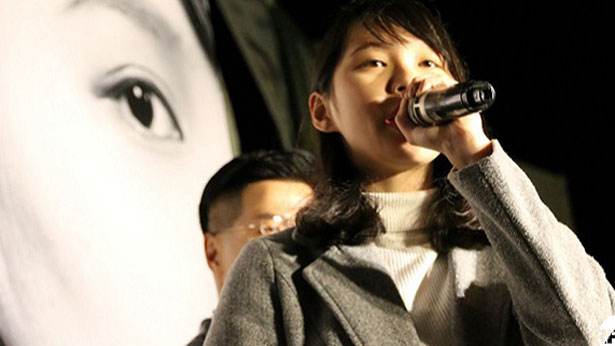 Agnes Chow, a Demosisto candidate who was barred from forthcoming elections to Hong Kong's Legislative Council (LegCo), addresses a crowd on Jan. 28, 2018.
RFA

Hong Kong authorities have banned a key member of the pro-democracy party Demosisto, which was formed by the leaders of the 2014 Occupy Central movement, from standing in a forthcoming by-election to the city’s legislature, sparking outrage among the pan-democratic camp and some legal analysts.A group of senior lawyers, all of whom are members of the city government’s Chief Executive Election Committee said that the refusal of Agnes Chow’s candidacy for forthcoming elections to the Legislative Council (LegCo) had infringed her fundamental rights, and was a matter of “deep regret and concern.”The bar on Chow is significant, because it sets a precedent for direct influence on the selection of Hong Kong election candidates according to Beijing’s wishes, casting serious doubts on promises of “a high degree of autonomy” made to the former British colony before the 1997 handover to Chinese rule.The move prompted thousands of people to gather outside government headquarters late on Sunday in protest at the decision by the Electoral Affairs Commission (EAC) to disqualify Chow, 21, a prominent member of the Demosistō party, from the March by-election.The EAC told Chow that her candidacy for the Hong Kong Island constituency election was rejected because her party supports self-determination for Hong Kong, local media reported.Some 2,000 protesters gathered in Civic Square, chanting slogans and carrying placards that read “Hongkong people want Plan A,” in a reference to the fully democratic elections that were denied to the city by Beijing, sparking the Occupy Central movement.“No disqualification! No to rule by officials!” they shouted.“I support electoral freedom for Hong Kong,” a protester surnamed Dong told RFA. “Everyone should have the right to stand for elections, and shouldn’t be able to have that right taken from them by any government.”“This is a very serious situation; a crisis,” she said. Chow described the decision against her as the political liquidation of a whole generation.“This decision to disqualify me is tantamount to permanently removing the rights of not just me but many other people in Hong Kong to take part in politics,” Chow said. “From now on, the government is saying that the people of Hong Kong will no longer be allowed to vote according to their wishes.”“Beijing and the Hong Kong government have, politically speaking, wiped out an entire generation,” she said. “It is clear that the government wants to obliterate us.”The Hong Kong government has backed the EAC’s decision, saying that anyone wishing to run for LegCo must obey the city’s mini-constitution, the Basic Law.“The candidate cannot possibly comply with the requirements of the relevant electoral laws, since advocating or promoting ‘self-determination’ is contrary to the content of the declaration that the law requires a candidate to make to uphold the Basic Law and pledge allegiance to [the Hong Kong government],” it said in a statement, echoing recently expressed views from senior ruling Chinese Communist Party officials on the idea of self-determination or independence for Hong Kong.Basic Law

The decision was influenced by Beijing’s parliament, the National People’s Congress, whose standing committee issued an interpretation that led to the disqualification of six directly elected pro-democracy lawmakers because their oaths were judged not to be “solemn and sincere.”Chief executive Carrie Lam said anyone wanting to stand for LegCo must do so within the parameters of the city’s mini-constitution, the Basic Law.“Anyone who talks about Hong Kong independence or democratic self-determination … is in breach of the requirements of the Basic Law,” Lam said.Demosisto’s first lawmaker Nathan Law, a former Occupy Central student leader, was among those who lost their seats, and his actions had also affected the election commission’s decision, the Economic Journal newspaper reported.Law told reporters the decision means that there is likely no longer any future in LegCo for the party, while former Occupy leader Joshua Wong, currently out on bail, also addressed the rally.“We have seen a number of disqualifications since 2016,” Law said. “Beijing’s red lines are being drawn ever tighter.”“I think those red lines will one day affect everyone who espouses democratic values,” he said. “There is now no difference between them and the ideological censorship and actions of the Hong Kong government.”The United Nations Human Rights Committee has said that people hoping to stand for election should not be excluded by reason of political affiliation or political opinion.The legal figures who signed the statement said that Chow’s political views were a key reason behind the decision to bar her from standing.In addition, denying Chow the chance to make representations, the "decision further breaches the fundamental rules of natural justice," they said, adding that open and fair elections have long been a hallmark of Hong Kong political life.Meanwhile, the pro-democracy camp’s candidate for the upcoming Kowloon West by-election, Edward Yiu, said his nomination has been accepted.Yiu was also among the six ousted lawmakers, but he added a line to his oath about fighting for universal suffrage, and made no mention of independence or self-determination for the city.Reported by Tam Lee for RFA’s Cantonese Service, and by Chen Pan and Gao Feng for the Mandarin Service. Translated and edited by Luisetta Mudie.

I could understand why Hong Kong People are angry.