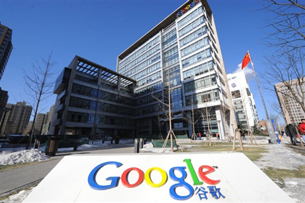 People walk past the Google China office in Beijing, Jan. 13, 2010.
AFP
HONG KONG—Chinese authors are considering a lawsuit against Internet giant Google as a group representing writers’ interests works through a list of more than 10,000 pieces of writing that may have been posted on its online library without permission.

Chinese Written Works Copyright Society deputy chief Zhang Hongbo said the group would be watching a Feb. 18 hearing between Google on one side and U.S. and Canadian writers on the other with close interest.

“We will wait and see what happens at the Google hearing on Feb. 18,” Zhang said.

“We will see the reaction from the United States and Canada, and other quarters and we will weigh up what sort of a statement to make.”

Last month, Zhang’s group said it had found nearly 18,000 books by 570 Chinese authors that had been scanned by Google and included in its digital library, Google Books—mostly without any notification or payment to the writers.

Zhang said then that the society had been asked by several hundred writers to act on their behalf in negotiations with Google.

The group has reportedly written to Google calling for it to leave China, and to issue an explanation in writing, but has received no response to date.

Google’s Asia-Pacific chief Erik Hartmann said he was unable to answer questions on the matter.

Chinese writers face rampant and blatant infringements of copyright in their home market, as do foreign authors.

But they are now taking U.S. critics to task for protesting Chinese copyright violations while Google is copying works without prior authorization and posting them online.

A lawyer acting for novelist Mian Mian said that of the authors who attended a January meeting on the issue, around 60 percent of authors were in favor of a lawsuit to address their concerns.

“Some will be satisfied with action by the Web service to remove infringing downloads,” said lawyer Sun Jingwei.

“Others want to pursue a claim for compensation, which means that they would go through the courts as a way of supporting their claim,” he said.

Some authors say dozens of their works have been scanned and posted on Google Books without permission, nor any contact from Google staff.

Google offered in October to pay each author at least U.S. $60 per book scanned, with 63 percent of any future sales revenue going to the copyright owner.

It told the Associated Press in a statement that while the offer only applied to U.S.-based authors, the company was “actively encouraging authors, publishers, and rights-holders around the world to register for the settlement.”

The government-affiliated Chinese Written Works Copyright Society was set up a year ago to represent writers amid a growing number of copyright violations.