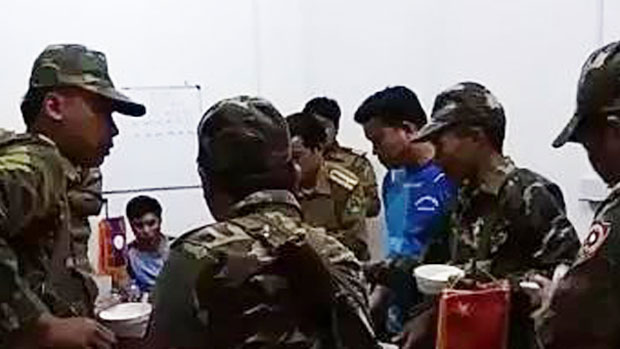 Lao armed security forces raid a Chinese cement factory in what the Chinese investor called an "armed robbery" but Lao officials say was an intervention in a bitter shareholders' dispute, May 16, 2018.
Photo courtesy of an RFA listener.

Two Chinese cement factories in Laos have halted production after their Lao partner launched armed raids on both sites on May 16 and 18, taking away large amounts of money and confiscating items of value, RFA has learned.

Guizhou Jiangge Group chairman Lin Jiaqi said the raids on the factories in Laos' Luang Prabang and Udomxay provinces were tantamount to "armed robbery," and couldn't have taken place without the involvement of the Lao authorities.

"Yes, we were victims of an armed robbery," Lin told RFA on Thursday. "What's more, we were robbed by [our Lao partner] Xiao Changshou, who brought in armed personnel toting sub-machine guns."

"This was absolutely at the instigation of the [Laos] government, because we are a Chinese investor here," he said. "Naturally, we are taking steps to resolve this issue now that this has happened."

Lin declined to detail the factories' losses, citing ongoing negotiations with the Lao side.

Lin said the cement factories form part of Chinese President Xi Jinping's strategic infrastructure project, titled the Belt and Road Initiative. The project offers preferential loans and infrastructure investment to countries in Asia and beyond in return for their participation in China's global supply line for crucial imports and key export routes.

"This was a key project in the Guizhou provincial Belt and Road portfolio," he said.

Meanwhile, a source close to the case shared a statement from the Lao partner accusing Jiangge of making "fake investments, covering up the facts, and appropriating state property."

Guizhou Jiangge Cement Co. signed the joint venture equity agreement with Lao partners to build and run the two factories in May 2017.

"During the course of our collaboration, the Lao partner discovered major problems ... seriously impacting the interests of its equity partners," the statement said.

It accused Jiangge of issuing a fraudulent contract for remodeling at one factory that overstated the cost of the project by U.S. $2,000.

It also accused the Chinese partner of being slow to deliver funding for the factories' construction, dragging the project out as a result, and of siphoning off "several million U.S. dollars" in income from one factory.

An unnamed source quoted the Lao side as saying that the armed personnel present at the scene were there in an official capacity to "keep order" at a raid intended to recover the allegedly lost assets.

Another source said Jiangge Group had planned to invest a total of U.S. $356.5 million in the factories, and only U.S. $67 million of those funds had been delivered.

An official from Udomxay’s Namor district called claims of an armed attack a “rumor” and said security forces were deployed to prevent a bitter shareholder dispute from boiling over.

“There was no such an incident like that rumor, but the shareholders are in serious conflict with each other, so security forces are deployed there since May to prevent them from brawling,” the official told RFA’s Lao Service on Friday.

Contacted by RFA, an official of Luang Prabang’s industrial and commercial department said  “the directors have a dispute with one another and now they are trying to find a solution.”

“The former director has not paid taxes and workers’ salaries, and the relevant provincial officials are helping them manage the conflict.”

Meanwhile, a Chinese logistics company said it had a similar experience in Laos a few years ago, and that while government personnel were likely involved in the raids, local corruption means that the raids were not part of a recognizable legal process.

The chairman of Yunnan Hongxing Logistics Laos Co., who gave only his surname Xin, said his company had invested in another cement factory Laos seven years ago, at a time when the country was starved of investment in its cement industry.

"We entered into a joint venture with [the Laos side], and signed a contract to acquire a 34 percent share ... the project was considered a bridgehead into Laos by the Yunnan provincial commercial bureau," Xin said.

"So, when we'd been in production for three years, they used exactly the same methods they are using now with Jiangge, and kicked all of our management team out," he said. "They sent in the army, and they appropriated our 34 percent stake in the process."

Xin said the armed personnel who raided his factory were regular government troops.

"They detained our people for 18 hours, and let them out when the consul general went to talk to them," he said. "But they couldn't get involved in the rights and wrongs of the dispute."

"They took everything of any value; now they are using the exact same methods with Jiangge, freezing their bank account and opening a new one," he said. "The Yunnan bureau of commerce tried to mediate the matter via the Chinese consulate, but the consul general could only arrange for the shareholders to sit down and talk about it."

"I don't know what to tell you: I don't think there's anything we can do about it," he said.

Reported by Wong Siu-san and Sing Man for RFA's Cantonese Service and by Ounkeo Souksavanh for the Lao Service. Translated and edited by Luisetta Mudie.