A demolition crew beats up a Chinese land activist and his family, then tears down his makeshift dwelling.
2012-07-27
Tweet 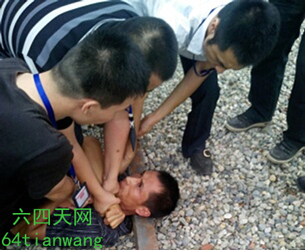 A demolition crew subdues Xiang Yangping while tearing down his home in Sichuan province, July 26, 2012.
Photo courtesy of 64Tianwang

An embattled land protester in the southwestern Chinese province of Sichuan said his family was violently evicted from their home on Thursday by  a demolition gang working for the local government, who attacked entire families and injured several people.

Xiang Yangping, who had built for his family a makeshift dwelling on a disused factory site following two previous forced demolitions and amid a  prolonged land dispute, said the demolition teams brought security gangs and bulldozers, razing their home to the ground.

"At about 11:00 a.m. this morning, the government forcibly demolished our house," local land activist Xiang Yangping said. "They beat up our entire family including my wife and daughter, who isn't yet 16 years old."

"They issued no documents, nor did they give any reason; they didn't say a word to us," he said.

Xiang's wife, who gave only her surname Yang, said the demolition gang had burst into their home and pinned her husband to the ground.

"They kicked him and beat him, and my son, who was outside playing, came running in to try to stop them," she said. "He was beaten up by the demolition gang as well."

She said her son received injuries to his head and arms.

"They dragged me outside and then they demolished our house," Yang said. "My injuries are still hurting me."

The incident was witnessed by one of Xiang's neighbors, who declined to give his name.

"There were several dozen people, maybe 70 or 80 of them," he said. "There were officials from the village and from the township."

He said there was nothing unusual about the Xiang family's decision to erect a makeshift home for themselves.

"In the countryside, everyone builds their own home," he said. "It's not strange at all in rural areas."

Yang said more than 20 fellow petitioners had rallied round to help the family after they heard about the demolition.

She said the family had tried to file a complaint at the Sichuan provincial Party disciplinary body on Thursday afternoon, but that they were ignored by officials there.

China's judicial authorities have called for a nationwide "stability" drive ahead of a crucial leadership transition later this year.

Land acquisition for development, often resulting in lucrative property deals for local officials, sparks thousands of protests by local communities across China every month, many of which escalate into clashes with police.

In recent years, property owners all over China have complained that existing leasehold contracts are being flouted by local officials and developers keen to swell revenue coffers with lucrative land deals.

Reported by Fang Yuan for RFA's Mandarin service and by Fung Yat-yiu for the Cantonese service. Translated and written in English by Luisetta Mudie.