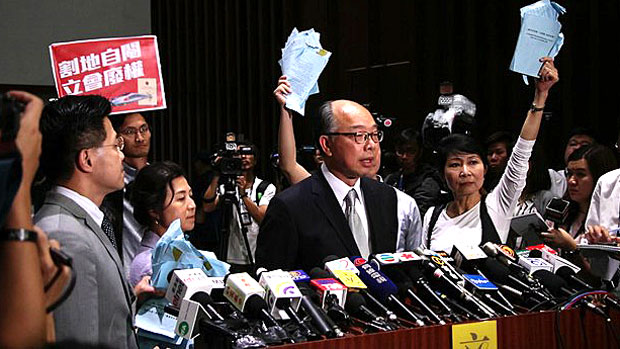 The passage of proposals allowing mainland Chinese law to be enforced within Hong Kong city limits represents an erosion of the city's promised autonomy under the terms of the 1997 handover treaty between Britain and China, a U.S. based rights group said.

Under the plan, Hong Kong law, including the International Covenant on Civil and Political Rights (ICCPR) and other existing provisions for the protection of human rights, will not apply to part of Hong Kong’s West Kowloon railway terminus, or any trains running between Hong Kong and mainland China, HRW China researcher Maya Wang wrote.

"Instead, Chinese authorities will be able to enforce Chinese criminal law in the heart of Hong Kong," Wang said, adding that Chinese law includes vaguely worded and sweeping national security and public order laws commonly used by the Chinese government to charge its peaceful critics.

Offenses such as “creating a disturbance” or “inciting subversion” are frequently used to target dissidents by the ruling Chinese Communist Party, Wang said.

Hong Kong's status as a separate legal jurisdiction had until recent years protected its residents and visitors from arbitrary prosecutions carried out for political reasons.

But student protesters, pro-democracy lawmakers, and "localist" politicians who want a greater degree of separation from mainland China have been jailed, disqualified, and stripped of office in recent years as Beijing's National People's Congress standing committee has staged a string of high-profile interventions in the city's political life.

Last week, former colonial governor Chris Patten hit out at the jailing of localist politician Edward Leung, as being the latest in a series of "politically motivated" convictions in Hong Kong courts.

Critics say the new arrangements for the West Kowloon rail terminus linking Hong Kong to the nationwide high-speed network ignores the city's status as a separate immigration, policing, and customs jurisdiction, enshrined in the terms of its 1997 handover to China, and in its mini-constitution, the Basic Law.

The city's Bar Association (HKBA) has hit out at the arrangement, saying it constitutes an irreparable breach of the Basic Law. The city's lawyers say the Hong Kong immigration department, not the mainland Chinese border police, should be in charge of entry and exit control checks for passengers entering and leaving the city, citing Article 154(2) of the Basic Law.

Chinese and Hong Kong government officials say the arrangement will streamline the immigration process, however.

"This is yet another disturbing example of China’s blatant disregard for Hong Kong’s rule of law," HRW's Wang wrote.

"This new arrangement, which will facilitate arbitrary detention and unjust prosecutions for exercise of fundamental rights in Hong Kong—alongside these other encroachments—should be seen as a concerted threat to rule of law and basic rights by Beijing," she said.

"They may not seem as dramatic as tanks rolling across the border, but the effect is likely going to be the same."

The passage of the legislation has prompted calls for the resignation of Legislative Council (LegCo) president Andrew Leung, who set a 36-hour time limit on debating the bill before forcing a vote.

Democratic Party lawmaker Au Nok-hin said Leung had abused his power as LegCo's speaker to push the legislation through.

"It sets a very bad precedent for there to be a time limit to members' proceedings in LegCo," Au said. "Many LegCo members ... intended to speak, but [Leung] didn't give them enough time."

"I feel that he has acted unreasonably and abused his power."

Alvin Yeung of the Civic Party said that while a proposed no-confidence motion against Leung was unlikely to gain traction in a LegCo dominated by pro-Beijing members, it was important to register pan-democrats' protest on the record.

"We all believe that he violated the rules of procedure," Yueng said. "We also none of us expect the motion to be supported by pro-establishment members, but we believe that everything that can be done, should be done."

Reported by Lam Kwok-lap for RFA's Cantonese Service, and by Chen Pan for the Mandarin Service. Translated and edited by Luisetta Mudie.