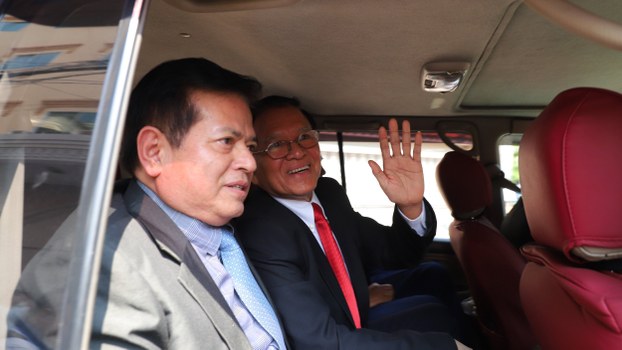 Kem Sokha travels by car to his trial at the Phnom Penh Municipal Court in Phnom Penh, Jan. 15, 2020.

Cambodia’s Prime Minister Hun Sen on Tuesday threatened to cut short opposition chief Kem Sokha’s bail and return him to prison, suggesting he was trying to “get away” with treason amid a postponement in his trial.

Kem Sokha, the head of the Cambodia National Rescue Party (CNRP), was arrested in September 2017 for allegedly conspiring to overthrow Hun Sen’s government, and his party was banned by the Supreme Court two months later for its role in the alleged plot.

The moves, as well as other restrictions on democracy and human rights, prompted the European Union in February to announce a partial withdrawal of trade benefits for Cambodia under its Everything But Arms (EBA) scheme that grants developing nations tariff-free access to its markets—posing an existential threat to the country’s key garment industry.

After Kem Sokha had spent nearly two years in pretrial detention, and several months of strict house arrest on bail, the Phnom Penh Municipal Court began his trial in January. But in the weeks since the EU decision, proceedings have been postponed twice amid complaints by the defense that it had not been permitted to respond to new evidence presented by the prosecution without prior notice.

On Tuesday, Hun Sen accused Kem Sokha of trying to avoid punishment for crimes the prosecution says are proved by a video recorded four years earlier in which he discusses a strategy to win power at the ballot box with the help of U.S. experts, although the opposition chief maintains his innocence and his lawyers have said that prosecutors lack evidence to convict.

“Do you think you can get away with your crime? You must be prosecuted,” Hun Sen told a crowd attending a graduation ceremony in the capital Phnom Penh.

“This time you will not be detained at Trapeang Phlong. You’ll be sent to another prison. Immediately after the final verdict is rendered you will be imprisoned.”

Hun Sen accused Kem Sokha of trying to force Cambodia to “suit the purposes of others” by plotting a rebellion.

“If you don’t like Cambodia and its system, get out of the country and serve the foreigners,” he said.

Kem Sokha’s legal team was not immediately available for comment on Tuesday, but they have consistently stated that their client’s case is “politically motivated” and have called for the court to drop the charges against him.

Ny Sokha, a campaigner with local rights group ADHOC, told RFA’s Khmer Service that Hun Sen’s comments amounted to an “act of intimidation against the opposition” and urged him to refrain from making statements that could influence the court’s decision in Kem Sokha’s trial.

“Hun Sen should leave it to the court to decide on Kem Sokha’s case,” he said.

“Statements by the prime minister while the case is being adjudicated can affect the rule of law and independence of the judiciary, which are already in question.”

Cambodia’s courts are widely seen as lacking independence and regularly issue decisions in line with Hun Sen’s wishes, most recently with a spate of rulings associated with cases brought against supporters of the country’s opposition.

Hun Sen’s comments came as authorities faced criticism over their response to online criticism of the government’s response to the novel coronavirus (SARS-CoV-2) and the spread of the disease it causes, COVID-19, of which Cambodia confirmed its third case on Tuesday.

The Ministry of Health announced that a 65-year-old British tourist who came to Cambodia from Vietnam along with 63 other passengers and crew via boat had become infected with COVID-19 and was being quarantined for care at the Kampong Cham Provincial Referral Hospital.

Hun Sen has suggested that the virus, which has infected more than 118,000 people and killed more than 4,200 worldwide, poses little threat to Cambodia and has urged the public to trust the country’s healthcare system.

In recent days, the prime minister had called on the public to tie the traditional Cambodian scarf, or Krama, around their mouths instead of a mask to ward off the spread of the virus, saying it “can last longer than a mask and be reused after washing,” while additionally creating “a bigger market for scarf weavers” who are facing the prospect of lost jobs as orders for the garment industry shrink.

Soon after his comments, medical staff at the Siem Reap Provincial Referral Hospital, where Cambodia’s second COVID-19 patient is being treated, posted photos to the hospital’s Facebook account showing them learning how to tie Krama around their mouths and noses, while Ao Vandin, a Health Ministry spokeswoman, called the practice effective at “keeping the virus from spreading to others.”

But Cambodian analyst and physician Seng Sary called the suggestion “medically incorrect” and urged medical experts to “step up and explain to people that it is not right to use scarves instead of masks” to combat the virus.

Amidst the confusion, authorities are arresting people who have posted comments on Facebook expressing their concerns over the coronavirus, including a man named Kauy Sam Ath who was charged with “incitement to cause social unrest” and an unidentified woman who was detained briefly by police in Siem Reap province before being released on Tuesday.

Am Sam Ath, deputy director of local rights group LICADHO, told RFA that authorities have no right to arrest people based on the messages they post on Facebook, or elsewhere online.

“Those arrested were simply expressing their opinions, which is guaranteed in our constitution,” he said.

“Such messages do not cause any public disorder. Concerns about the spread of coronavirus are shared globally. People are frustrated. A better solution is to educate people on the outbreak to mitigate their fear, anxiety, and frustration, rather than arresting them.”