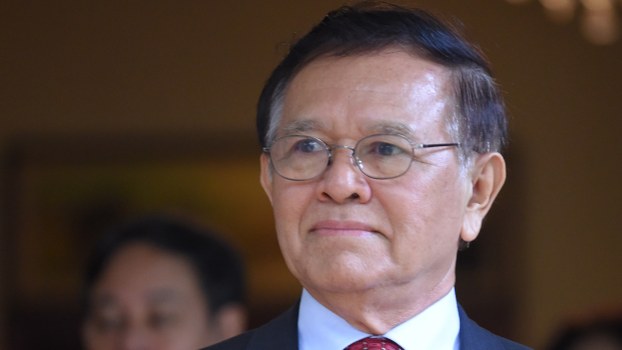 Former opposition leader Kem Sokha looks on after a meeting with US Ambassador to Cambodia Patrick Murphy at his home in Phnom Penh, Nov. 11, 2019.

A court in Cambodia’s capital on Wednesday issued a summons requesting that a former elected official with the country’s banned opposition in Banteay Meanchey province give testimony next week at the treason trial of his party’s president, Kem Sokha, despite never having spoken with him.

Leng Vibol expressed surprise over having been summoned as a witness in the trial, but told RFA’s Khmer Service he will participate, despite never having held a discussion with Kem Sokha.

"I have never had a close relationship with Kem Sokha. I have never met him face to face and have never talked to him," he told RFA.

“I love facts, and I would never allow myself to be forced to say something that isn’t true,” Leng Vibol added.

He said he agreed to take part in the hearing next week because “if I don’t participate in the trial, it will appear as if I have committed a crime.”

Kem Sokha was arrested in September 2017 and charged with treason over a video recorded four year earlier in which he discusses a strategy to win power at the ballot box with the help of U.S. experts. If convicted, he could face up to 30 years in prison.

The move to dissolve the CNRP was part of a wider crackdown by Prime Minister Hun Sen on the political opposition, NGOs, and the independent media that paved the way for his ruling Cambodian People’s Party (CPP) to win all 125 seats in parliament in the country’s July 2018 general election.

Since the election, authorities have detained several CNRP activists over allegations of “treason” and restricted or surveilled others, while appearing to turn a blind eye to physical assaults against party supporters by unknown assailants believed to be associated with the CPP.

Kem Sokha has maintained his innocence since his arrest, which saw him spend more than a year in pre-trial detention before he was moved to strict house arrest, and his legal team has said prosecutors lack the evidence to convict him.

Following the 2018 ballot, Western nations have threatened sanctions against Hun Sen’s government over his rollbacks of democratic freedoms in Cambodia, calling for the reinstatement of the CNRP and for authorities to drop charges against Kem Sokha.

Seoung Sen Karona, a spokesman for local human rights group Adhoc, said Wednesday he finds it strange that the court summoned a witness who had never communicated with Kem Sokha, adding that such a witness would be unable to provide the CNRP chief with justice.

“The domestic and international communities know that Kem Sokha’s trial is based on a politically motivated case that came out of a political dispute,” he said.

Such a dispute should be handled through political discourse, rather than in the courts, he said.

Leng Vibol’s summons came a day after Hun Sen told an audience of tens of thousands assembled in Phnom Penh to mark the 41st Victory Over Genocide Day that he will not comply with recommendations by Western governments on how to run a democracy in Cambodia, saying that to do so would prevent him from upholding domestic law.

“There are no legitimate claims raised by the international community about the need to restore democracy and human rights in Cambodia,” he said at the event, held to commemorate the end of the murderous Khmer Rouge regime in 1979.

“I hope the international community will reconsider based on Cambodia’s positive developments and respect the will for Cambodians to pursue progress appropriate to our culture, society and constitution.”

Hun Sen lauded what he said has been a transformation under his leadership of Cambodia from a nation torn apart by the Khmer Rouge to one enjoying peace, stability, democracy, development, and the rule of law.

Following Hun Sen’s comments, political analyst Kim Sok told RFA that the West is right to call on Cambodia’s government to respect domestic and international law, adding that Hun Sen’s version of democracy is “fake” and “in violation of the country’s constitution.”

Social analyst Meas Nee told RFA that Cambodians are not convinced that Cambodia has achieved peace under Hun Sen’s more than three decades in power.

“We, as citizens, can’t accept that we are enjoying peace,” he said. “The government can make such claims, but it is ultimately up to the people to decide.”

Last week, Hun Sen promoted a new “Thank You Peace” slogan campaign, which he said does not oppose any group and demonstrates how stability has allowed Cambodia to develop under his 35-year rule.

“All people need peace, except for terrorists who seek to destroy it,” he said at the time, in a thinly veiled reference to supporters of the CNRP, several of whom have been detained in recent months amid accusations that they seek to overthrow his government.

Analysts, however, have said Hun Sen’s campaign seeks to “divert public attention” while he continues to “abuse his power and the constitution” for his personal interests.