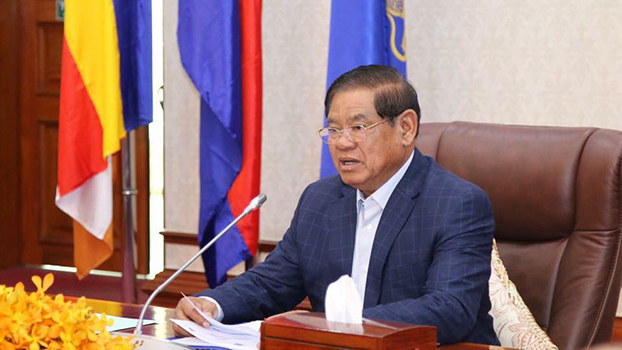 Cambodia’s Minister of Interior Sar Kheng held a meeting Tuesday with his counterparts from the environment and agriculture ministries as well as the heads of other institutions to discuss amending several laws, which he says have been ineffective.

According to a Facebook post by Sar Kheng, the new laws they began drafting during the meeting will allow local authorities to directly deal with the illegal harvesting and smuggling of Cambodia’s natural resources.

The ministry plans to hold a national workshop that includes representatives from NGOs and the community to contribute their thoughts on the new draft laws once they are complete.

NGOs welcome the effort, but are concerned that unless the new laws are implemented, amending the existing laws is a waste of time.

Senior Program Officer Penn Bonnar of the Cambodian Human Rights and Development Association (ADHOC) said that even though the current laws have loopholes, they would work if the government adhered to them. He fears the laws are being amended to serve political purposes.

“I hope these new laws will punish suspects to the fullest extent,” he said.

Bonnar said that authorities and the courts have failed to fine suspects even though the existing laws call for it.

The move to change these laws came after Sar Kheng in September criticized their effectiveness, saying local authorities are powerless because only forestry officials could resolve forest crime.

“The laws give complete power to the forestry administration,” he said, adding, “When authorities don’t have power they can’t do anything.”

He acknowledged that there was opposition to the changes but the ministry still plans to move forward.

“This is for the sake of the country. The forest does not belong to you!” he said.

Forestry activist Heng Sros said that forest crime is not the result of ineffective laws, instead it is the result of corruption.

“I think if authorities would actually implement [the existing] laws, we wouldn’t need any new laws,” he said.

Cambodia has long endured the rampant smuggling of logs and timber--often with the complicity of local authorities--to neighbors such as China and Vietnam, where the wood is used to make high-end furniture.

In May 2017, a report by the U.K.-based Environmental Investigation Agency (EIA) said that around 300,000 cubic meters of timber—including endangered rosewood—had been smuggled out of protected areas in Cambodia to Vietnam with the help of local authorities through some U.S. $13 million paid in bribes between November 2016 and March 2017.

According to the NASA Earth Observatory website, between 2001 and 2014 Cambodia lost a total of 1.44 million hectares (5,560 square miles) of forest, one of the world’s fastest rates of deforestation.

“Though other countries have lost more acres in recent years, Cambodia stands out for how rapidly its forests are being cleared,” the agency said in a 2017 report.