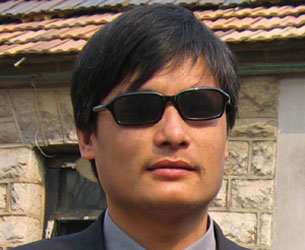 HONG KONG—Blind Chinese rights campaigner Chen Guangcheng and his family are being subjected to "extreme measures" in the wake of his release last month from jail in the eastern province of Shandong, local and overseas rights activists said.

The New York-based group Human Rights in China (HRIC) called on the international community to step up pressure on Beijing over the "illegal de facto imprisonment" of Chen.

While Chen was released from prison on Sept. 9, he and his wife, Yuan Weijing are not allowed to leave their home, and no one—not even Chen’s mother—has been allowed to visit the couple since early October, the group said in a statement on its website.

"Currently, measures similar to martial law have been imposed by the authorities in Chen’s village, Dongshigu, Shandong province," HRIC said.

"Now, no one knows the situation of Chen and his wife, and many are deeply worried about their safety and security," it said.

Chen, 38, has been confined at home since his release at the end of a jail term of four years and three months for "damaging public property and obstructing traffic" handed down by the Linyi municipal court in August 2006.

Chen, who had exposed abuses like forced abortions and sterilizations by local family planning officials under China's "one-child" population control policy, served the full term in spite of repeated requests for medical parole.

Shenzhen-based rights activist Yang Lin said he tried to visit Chen at his home in Dongshigu village on Oct. 30.

But he was told to get off the long-distance bus by the driver 100 meters from the village. The driver said the village was being sealed off by the authorities.

He said the main village intersection was crammed with plainclothes police officers.

Yang said he had managed to talk to a cousin of Chen's in the village, who told him that the activist's house was being watched round the clock by more than 100 security personnel and officials.

She said no one had been allowed to visit the Chen family home since October, not even to take in food for the family.

"His sister-in-law and his mother and his elder sister are all afraid that there's no food in the house for the family to eat," Yang said.

"They won't even let anyone throw in some fresh vegetables from outside the building."

Gao Wenqian, of HRIC, said Chinese law stipulates that anyone serving a prison sentence must be released when they have served their time.

"Under these circumstances, he ought to enjoy constitutional protection of his freedom," Gao said.

"The Chinese government is really going far too far in treating him in this manner."

He said the international community needs to step up pressure on the Chinese government over its human rights record.

"China has come under widespread pressure over political change since the award of the Nobel Peace Prize to [jailed dissident] Liu Xiaobo," Fan said.

"This has made the conservatives within the system sit up and take heed that political change can't be far off."

He said the sense of widespread insecurity among China's ruling elite had led to a further backlash in the form of greater suppression of personal freedom and expression.

"It is precisely that suppression which will propel China even faster along the road to democratization," Fan added.

Chen is well-known in China's civil rights community, which is frequently exposed to detention, prison sentences, and official violence and harassment as activists struggle to enforce the rights of the country's most vulnerable people.

The United States said Nov. 3 it was "concerned" by reports of Chen's house arrest.

Late last month, a group of American lawmakers urged U.S. ambassador Jon Huntsman to raise Chen's case with Chinese officials and to "send an officer to visit Chen to check on his welfare and well-being."

Reported by Tang Qiwei for RFA's Mandarin service. Translated and written in English by Luisetta Mudie.