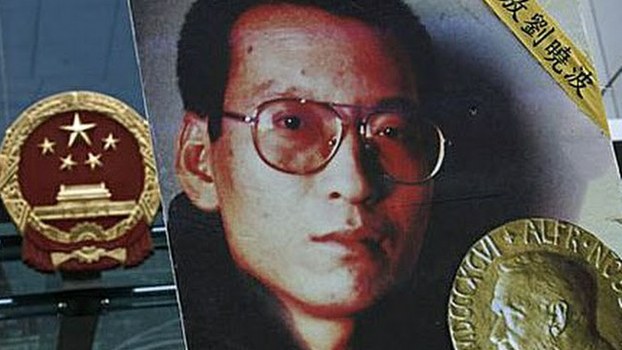 A poster depicting Liu Xiaobo is displayed in a file photo.

Authorities in the northeastern Chinese province of Liaoning have released dissident and Nobel peace laureate Liu Xiaobo to hospital with terminal liver cancer, his family said on Monday.

Liu, 61, is currently being treated at a hospital in Liaoning's provincial capital Shenyang, his lawyer told RFA, following a diagnosis of late-stage liver cancer little more than a month ago.

"Liu Xiaobo was taken ill on May 23, and his liver cancer is now in the advanced stages," Mo Shaoping said on Monday.

"We have now completed the medical parole process, and he is now receiving treatment in the Shenyang Medical University Hospital in Liaoning," Mo said. "He wouldn't have been allowed to receive treatment outside prison without that."

However, he hinted that the state security police are still watching Liu's room and keeping tabs on visitors.

"Some of his relatives have actually already been to visit him, but I can't say that there is absolutely no surveillance [at the hospital.]"

Asked if Liu's family had any plans to apply for him to seek treatment overseas, Mo said nobody had suggested it.

The move comes after repeated applications by Mo were refused by the authorities.

The news set off a flurry of comments on Twitter, which isn't directly accessible within China, and which is often used by rights activists to make statements by circumventing the Great Firewall of government blocks, filters and human censors.

"The Chinese government should have released Liu Xiaobo without any conditions," veteran political journalist Gao Yu tweeted on Monday. "Many people in China are asking His Holiness the Dalai Lama to pray for Liu Xiaobo, to help him fight off the evil spirit of cancer."

Former political prisoner and Sakharov prize-winner Hu Jia, who was himself in hospital in critical condition last May, added:

"The death of prisoners of conscience from terminal illnesses developed in the [ruling] Chinese Communist Party's prisons is nothing short of political murder," Hu said.

In a later interview, Hu said the authorities should bear full responsibility for treating Liu, whose wife Liu Xia has remained under house arrest, to the detriment of her mental health, at the couple's home in Beijing since the award was announced.

"They must also lift Liu Xia's house arrest," Hu said. "What have the government done to this couple? Liu Xia is sick herself, mentally and in other ways."

"Her father has died, and her brother is a hostage, with the threat of criminal charges hanging over him," he said. "This family is being persecuted to death."

Richard Choi, vice-chairman of the Hong Kong Alliance in Support of the Patriotic Democratic Movement in China, which has long campaigned on behalf of the Lius, agreed.

"We think that Chinese Communist Party, in jailing Liu Xiaobo, was already violating his human rights," Choi said. "But now, we have a second wave of human rights abuses, which are linked to his health."

"We feel very angry about this."

Unlike many high-profile dissidents before him, Liu didn't qualify for medical parole because he has never admitted to committing any crime, and friends say he is highly unlikely to have accepted any exile deals offered to him by the government.

But Hong Kong Medical Association president Choi Kin said there is little treatment that can be offered to patients like Liu, who may only have months left to live.

"There is chemo, but the outcomes in final stage liver cancer aren't good," Choi said. "There are medicines that can be prescribed for palliative purposes, and some people have injections to shrink the tumor, but none of these treatments can cure the underlying disease."

"If metastasis hasn't yet occurred, then a liver transplant can be performed, but that can't happen if the cancer has already spread."

He said most cases of liver cancer in mainland China are linked to infection with the hepatitis B virus when people were younger, which then went untreated.

"Of course, if [Liu] didn't receive adequate treatment for hepatitis B while he was in prison, or if he had a poor diet and too much physical labor, this could have brought about the cirrhosis of the liver, which would then develop into liver cancer," Choi said.

Guangdong-based author Ye Du said his thoughts are with Liu Xia: "Liu Xia has had to pay such a high price, with only three years left until Liu Xiaobo was going to be released anyway," Ye said. "This is unacceptable, from [their] family's point of view."

"The only hope would be if the Chinese government were to allow him to seek medical help overseas," he said, drawing parallels with the recent release of U.S. student Otto Warmbier, who died last week, days after he was sent home in a coma from prison in North Korea.

"I can't help but draw a parallel between the two incidents," Wang said. "Why was Liu Xiaobo only released when his cancer was in the terminal stages? It is terribly, terribly inhumane."

But a spokesperson for the foreign ministry in Beijing said they were unaware of the details of Liu's case when asked about him at a regular news briefing on Monday.

A literary critic and former professor, Liu was awarded the 2010 Nobel Peace Prize "for his long and non-violent struggle for fundamental human rights in China" in a decision that infuriated Beijing, which says he has broken Chinese law. During the Nobel Peace Prize ceremony in Oslo, Liu was represented by an empty chair.

Beijing cut off trade ties with Norway in the wake of the award, although the Norwegian government said it had nothing to do with the decision. Ties were only fully resumed last December.

Liu has been held since 2008 after helping to draft Charter 08, a manifesto calling for sweeping changes in China's government that was signed by thousands of supporters.

In a statement on June 26, the chairs of the U.S. Congressional-Executive Commission on China asked for Liu's immediate transfer, together with his wife, to the U.S. for medical treatment.

"I urge President Trump to seek Nobel Laureate Liu Xiaobo's immediate humanitarian transfer to the United States," said commission chair Senator Marco Rubio. "While we are pleased Dr. Liu is no longer behind bars, this is hardly an act of mercy on the part of the Chinese government."

China's jailing and treatment of Liu, an advocate for human rights and nonviolent political reform in China, "remain a travesty of justice and a stain on China's rights record," Rubio said.

"Liu Xiaobo, and countless others like him who courageously seek peaceful change in China, are heroes worthy of honor, not criminals deserving to be tortured or unjustly punished."

"The Chinese government is just making sure this champion of democracy does not die in prison," Smith said.

Reported by Ding Wenqi for RFA's Mandarin Service, and by Goh Fung for the Cantonese Service. Translated and edited by Luisetta Mudie.