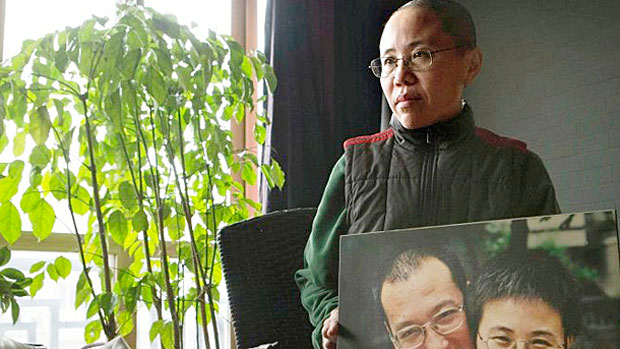 Germany-based writer Liao Yiwu has released a recording of a phone call with Liu Xia, widow of late Nobel peace laureate and political prisoner Liu Xiaobo, amid growing calls for her release from house arrest at her Beijing home.

Liu Xia has been under house arrest since the announcement of her late husband’s Nobel prize in October 2010, sparking an international public outcry.

She has repeatedly asked to be allowed to leave China, possibly for Germany or the United States, but the ruling Chinese Communist Party appears reluctant to allow this to happen.

Liao released a recording of the seven-minute phone call with Liu Xia, with her consent, to highlight her growing psychological distress. She has already been diagnosed with clinical depression.

"The German Embassy knows my situation ... so why does it keep on asking me to do these documents over and over again?" a sobbing Liu asks him in the recording. "I am incommunicado; I have no cell phone and no computer. They know I don't have these things, but they keep asking for them anyway."

"Are you recording this? I am at my wits' end. I might as well die here," she says. "I'll just die and forget the whole thing. They know very well that I don't have any of this stuff."

Liu said she is ready to leave China at a moment's notice.

"When I got the call from the German Embassy, I started packing up my things," she says. "I haven't delayed the process in any way. But they are insisting that I do things that I have no way of doing."

Reports emerged earlier this year that Chinese officials may be getting ready to allow Liu Xia to leave the country.

Rights groups say she currently remains in a state of de facto incommunicado detention, cut off from the outside world and barred from making her own free decisions about where to go, or whom to associate with.

In talks with China

An official source in the German Foreign Ministry confirmed it is in talks with China about Liu.

"The German Government has been discussing the case of Liu Xia with the Chinese Government and will continue to do so," the source said.

"According to the information available to us, Liu Xia has not been accused of any crime. She should be allowed to travel, also for humanitarian considerations," the source said.

"Should she choose to come to Germany, Liu Xia would be welcome here at any time."

Liao told RFA that the German government is very concerned for Liu Xia.

"Chancellor Angela Merkel is extremely concerned about the situation, and there have been very positive moves from the German Foreign Ministry," he said.

"They have been in talks for a long time now, and actually the Chinese side has agreed [to allow Liu Xia to go to Germany] but they keep delaying the process."

"So things have dragged on until now, and now Liu Xia can't find the officials who made her those promises," he said. "There has been no explanation ... it's disgusting behavior."

He said he fears that Liu's mental health is deteriorating.

"Liu Xia is in a state of total emotional collapse and despair," Liao said. "I thought that releasing this recording ... would illustrate that very clearly."

He said Liu had also expressed the desire to "use her death as a protest" in a recording made on Monday.

"If Liu Xia wants to do this, then I think a change of strategy is called for, because previously ... we took a very low-key approach regarding everything that was going on behind the scenes," Liao said.

"We believed we were following protocol, whether it was mine with the German government or Liu Xia's conversations with the state security police over there."

"But it seems that our goodwill has been repaid with ill-intention, and that the Chinese Communist Party is playing a very dirty game, by dragging things out for so long."

A U.S. State Department spokesperson told RFA by e-mail that Liu Xia's freedom to move around within China and her right to leave the country are being "inappropriately restricted."

Guangdong-based writer Ye Du, a close friend of Liu Xia's, said her situation looks far less hopeful than it did when he last spoke to her.

"The last time [we were in touch], Liu Xia seemed pretty confident that she would leave China, so her mood had improved considerably," Ye said. "At the time, the Chinese government had guaranteed that she would be allowed to leave."

But he said he fears Liu Xia may now face a backlash from the authorities over the recording.

"I think there will be a negative impact on Liu Xia," he said.

"Liu Xia has talked about dying before. She lives on the fifth floor, and she has been suffering for so many years now," Hu said. "Our worst fear is that she may suddenly get to a psychological dead end, and attempt it."

Liu Xiaobo died last July, weeks after being diagnosed with late-stage liver cancer, and after repeated requests from his family to seek medical treatment overseas were ignored.

Police have since detained a number of activists who staged memorials in his honor, and his name is still a banned search term on China's tightly controlled internet.

Reported by Wen Yuqing, Dai Weisen, Ho Shan, Ng Yik-tung and Yeung Mok for RFA’s Cantonese Service, and by Lin Ping for the Mandarin Service.Translated and edited by Luisetta Mudie.