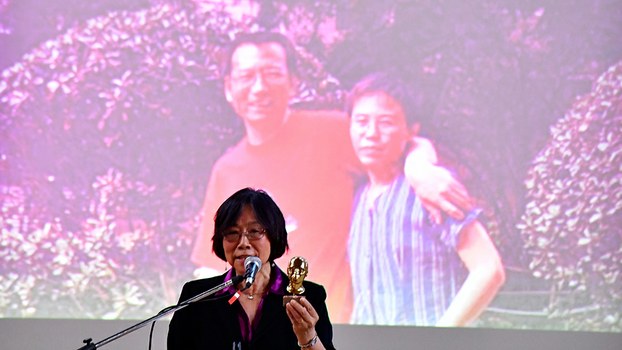 Cologne-based Tienchi Martin-Liao, president of the Independent Chinese PEN Center, recently met up with Liu Xia, the widow of late Nobel peace laureate Liu Xiaobo, after her arrival in Germany following eight years of house arrest. She spoke to RFA's Mandarin Service about how Liu Xia is finding her new life in Berlin:

RFA: Could you tell us more about Liu Xia's situation?

Tienchi Martin-Liao: I haven't seen Liu Xia every day, because she's in Berlin and I'm in Cologne, which is around 400-500 kilometers (250-300 miles) away. But I know something of her situation. Last Monday, she had a full health check, a pretty thorough one; not the kind that is done within a single day. There will be a few more tests to come after that, too, and the results haven't come back yet.

As for how she's doing, she's in very good spirits, emotionally, because one of her relatives and a very good friend came rushing over from the U.S. to visit her. Her relative in the U.S. is actually her younger brother's son. She took care of him when he was little, so they have a very close relationship. She really loves him. I think he's grown now, and he came over to see her. The friend is someone who previously bought some of her artwork; her photography. So the two of them came over to visit, and she's very happy right now.

Also, she recently moved her accommodation. She was in a hotel before. I don't know whether it's a hotel she's in now, but she said it's a very beautiful place, this new place she's in, and she loves it. She can take walks with people accompanying her. She is still pretty weak, and gets tired very easily. And there's also a security consideration here, I think.

RFA: You say that she has to have people with her? I understand that some of them are friends, but are they also Chinese officials?

Tienchi Martin-Liao: I can't tell you whether these people are Chinese officials; but she is able to visit her good friends, and she has posted about that to her Facebook page, but she still can't present herself in public.

RFA: Could she go to Norway to receive Liu Xiaobo's Nobel Prize in person?

Tienchi Martin-Liao: In theory, she could, but she won't do that, not for the time being, at least. I think she will eventually do that one day, but not right now.

RFA: Is that because her brother remains behind in China?

RFA: The German government is currently meeting Liu Xia's living expenses, for a transitional period. What will be the arrangement when that period is over? Is there a definite plan in place?

Tienchi Martin-Liao: Yes. Actually, the German government has done everything they can here, and they are being very generous. They haven't set any kind of timeframe beyond which they will stop taking care of her needs. But naturally, I think other organizations will need to step in, because this is a financial issue, and one institution has already stepped in to say that it will offer her that support. Everyone's heard of it; it's the Goethe-Institut. There's a branch in Beijing, and everywhere else, too. Its job is to introduce the rest of the world to German language and culture. It also exists in Germany, where it offers German-language training to foreigners and so on.

RFA: Is this an official body?

Tienchi Martin-Liao: I guess it's a semi-official organization; it's not private. I think it gets government funding. So this institute will be taking over responsibility for Liu Xia's living expenses for a period of time, to ensure that she has a reasonably good place to live; appropriate accommodation.

RFA: So what sort of role will she have at the Goethe-Institut?

Tienchi Martin-Liao: I don't know. Liu Xia isn't just the wife of a dissident; she's a poet and an artist in her own right. But I can't tell you that, because I wasn't involved.

Note: The Goethe-Institut is an independent cultural organization regulated by a 1976 contract with the German Foreign Office.

Liu Xia's brother is essentially the CCP government's hostage. There is a time-honored tradition in Chinese politics of hostage taking that goes back at least to the Zhou dynasty (1050 BCE-256 BCE). The CCP is thus able to punish Liu Xia at will through her brother. That is the main reason why Liu Xia has been keeping a low profile.