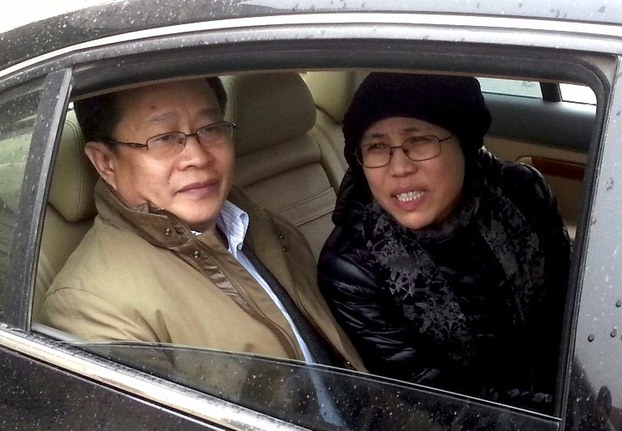 Five years after being awarded the 2010 Nobel Peace Prize, jailed Chinese dissident Liu Xiaobo, activists are calling on the ruling Chinese Communist Party to release his wife Liu Xia, who has been under house arrest at the couple's Beijing apartment since her husband's award was announced.

Beijing rights activist Hu Jia, a close friend of the Lius, said the Nobel award has had huge repercussions for the activist's entire extended family.

"[Liu Xia's] brother was sentenced to 11 years in jail, which was entirely because of his connection to the Lius," Hu told RFA.

"But the worst persecution has been the way they have cut off Liu Xia's communication with the outside world, and silenced her," he said.

While Liu Hui has since been released from prison, he remains under bail conditions, and is an important form of leverage over Liu Xia, Hu said.

"Basically, they are effectively saying to Liu Xia that if she has any contact with the outside world, people like me, foreign diplomats or journalists, then they can put her brother back in jail again," he said.

"So she has no way to speak out either on her husband's behalf, or her own."

Hong Kong-based campaigner Richard Choi said his group, the Patriotic Alliance for the Democratic Movement in China, has been campaigning for Liu's release and on behalf of Liu Xia since her husband's sentencing to 11 years' imprisonment on Dec. 25, 2009 for "incitement to subvert state power."

"All Chinese citizens should speak out for Liu Xiaobo," Choi said, adding that 2015 Nobel medical prize-winner Tu Youyou should add her voice to those calling for Liu's release.

"I think Tu Youyou should also call on the Chinese government [to release him]," he said.

"Five years after Liu Xiaobo won the Nobel Peace Prize, I want to call once more on the Chinese government to release him immediately," Choi said.

"Chinese people should be proud of our fellow citizen, Liu Xiaobo, for winning the Nobel Peace Prize," Choi told RFA.

Hu said he is being prevented from leaving his apartment on Thursday, for fear he should use the day to carry out some form of protest on their behalf.

"Today is treated the same as Dec. 10; they are both taboo dates, and whenever they roll around, I am held under house arrest at home," Hu said.

"I heard the state security police talking about it, and they said I wasn't to be allowed to leave my apartment," he said.

Hu said he would mark the day at home in his own way, however.

In June 2014, the authorities turned down an application for parole from Liu's lawyers, who said he can't make a fresh request for another three years from that date.

In the application, Liu, 60, criticized the prison authorities for denying him the right to be in contact with friends and family, which is against China's Constitution.

However, he is unlikely to qualify for parole, because he has never admitted to committing any crime.

Liu Xiaobo's continued imprisonment was cited by rights groups as an emblem of Beijing's poor record during Xi's state visit to the United States last month.

A literary critic and former professor, Liu was awarded the 2010 Nobel Peace Prize "for his long and non-violent struggle for fundamental human rights in China" in a decision that infuriated Beijing, which says he has broken Chinese law.

He has been held since 2008 after helping to draft Charter 08, a manifesto calling for sweeping changes in China's government that was signed by thousands of supporters.

Reported by Xin Lin for RFA's Mandarin Service. Translated and written in English by Luisetta Mudie.