China is seeking eased curbs on sensitive U.S. exports before it revalues its currency, but experts say a trade-off would be unacceptable.
By Michael Lelyveld
2010-05-28
Tweet 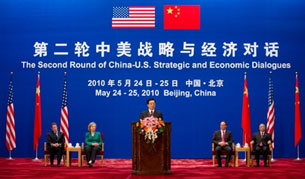 BOSTON—China has been pressing the United States for greater access to high-tech goods before it loosens controls on its undervalued currency, experts say.

The two issues ranked high on the agenda at the May 24-25 meeting of the U.S.-China Security and Economic Dialogue (SED) in Beijing, although the talks produced little progress on either of the long-standing concerns.

For years, Beijing has urged Washington to ease curbs on sales of high-tech items to China, while the United States has been equally persistent in seeking revaluation of the yuan to reduce its trade deficit.

But recently, Chinese official comments and reports have been more openly suggesting a trade-off of currency controls for export controls.

"I don't have much doubt that would make them very happy, but I don't think that we're going to do that. It wouldn't be the right way to proceed," said William Reinsch, president of the National Foreign Trade Council in Washington.

Chinese reports on the SED meeting drew links between the control issues, hinting Beijing may not budge on exchange rates until it sees how much access to U.S. technology it can get.

"China on Monday pledged to push ahead with currency reforms but only at its own pace, and pressed for an end to U.S. curbs on high-tech exports," the English-language China Daily wrote on May 25.

"China wants details of U.S. plan on easing high-tech exports," said a headline from the official Xinhua news agency on May 24.

Writing in the Washington Post on May 23, Finance Minister Xie Xuren also said the bilateral trade imbalance could be reduced "if the United States can loosen its export controls on civilian high-tech exports to China."

Despite the push, observers see little prospect for big moves on either side.

China's expectations of greater high-tech access have been rising since last August, when President Obama called for a review of the entire U.S. export control system to eliminate unneeded trade barriers.

But experts do not expect officials to consider big breaks specifically for China, or any trade-off for revaluing the yuan.

"They would decide up front that the items were not essential to our security and therefore they could properly decontrol them. It would never be as a gift to the Chinese," said Reinsch, who is a member of the U.S.-China Economic and Security Review Commission and a former U.S. Commerce Department official.

No changes are expected in U.S. bans on military exports to China, imposed after the Tiananmen Square crackdown in 1989.

Taiya Smith, senior associate at the Carnegie Endowment for International Peace and a former Treasury Department official, said the U.S. review may include some "dual-use" items that China wants like helicopter parts, if officials can verify civilian end use.

Smith said U.S. export controls currently restrict China's access to only a small number of products that it wants or cannot get somewhere else.

"It's a tiny, tiny amount of products worldwide," Smith said. She said she doubts that militarily useful products will be made available as a result of the U.S. export control overhaul, but added that export licensing and end-use decisions could be streamlined.

Last year, a Congressional Research Service report suggested there would be little impact on the trade balance with China from an easing of high-tech curbs.

In 2008, U.S. sales of advanced technology goods like electronics totaled $18.7 billion or 26 percent of exports to China, while the bilateral deficit soared to a record $266 billion, the report said.

But Smith also doubts there would be much impact on the deficit from revaluing of the yuan, despite estimates by U.S. trade groups that China deliberately pegs the currency 40 percent below its real value to give its exports an edge.

Specific U.S. sectors like steel could benefit from revaluation, Smith said, but U.S. trade deficits with China are likely to stay high. In any case, few expect that China will make more than a modest adjustment by restarting its "crawling peg" of gradual appreciation against the dollar.

China may have to let the yuan rise because of the inflationary pressure of huge capital inflows, whether or not it gets any concessions on export controls.

"Sure, the Chinese would be thrilled to make that trade. That's because they know they're going to have to move on the currency," said Smith. "They need to move for their own internal reasons having nothing to do with the external concerns."

But the two issues of export and currency controls may have become linked by politics rather than economics.

"They're both political and I would say symbolic issues that both countries are looking at and considering as they look overall at their strategic relationship," Smith said.

Derek Scissors, research fellow for economics at the Heritage Foundation in Washington, said that yuan revaluation would do little for the global U.S. trade deficit because higher-priced goods from China would only drive low-cost manufacturing somewhere else.

But Scissors said the export and currency issues have become linked as reasons for delay.

"It's meant to say, we're not willing to do anything, but you aren't either, so it's fair."

William Reinsch said such a trade-off would not be acceptable in any case.

"I think that it would be not a useful approach because one is about national security and the other is about economics, and I don't think the administration ... would ever take a position that would compromise our security."