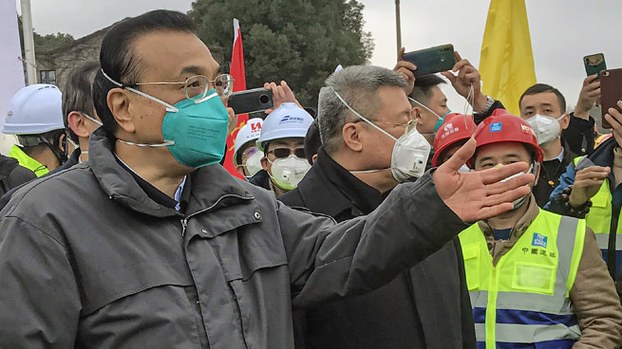 China's Premier Li Keqiang (L) gestures during a visit to a construction site of a new hospital being built to treat patients of a deadly virus outbreak in Wuhan, central China's Hubei province, Jan. 27, 2020.

As China's government battles the coronavirus and urges businesses to get back to work, it is setting a tough task for energy markets by calling for contingency plans in case production resumes with full force.

The spread of the outbreak during the Lunar New Year holiday caught China's economic planners by surprise, leaving them to deal with energy supply disruptions at a time when the epidemic was taking hold.

At a meeting chaired by Premier Li Keqiang on Feb. 6, the leading group of the Communist Party of China (CPC) Central Committee appointed to cope with the crisis called for both energy production and precautions to prevent infections among workers.

In the short term, local energy supplies to deal with the crisis have been running low due to transport curbs and fear of contagion, while longer term problems with supplies could hamper an economic recovery.

"Contingency plans will be made to ensure the supply of coal, electricity, oil and gas in case the intensive resumption of production should lead to their short supply in some regions or periods of time or the surge of prices," the group said in a statement reported by the official English-language China Daily.

At the same time, companies were "encouraged to find ways to decrease the population density in workplaces and adopt shift work operation to ensure full production," the statement said.

"Coal industry officials at the various production centers have been urged to strictly supervise the production process and ensure that there are no coronavirus outbreaks at mines under their jurisdiction," the NEA said.

But it was unclear how the coal companies could increase production without exposing miners to additional risks.

More complications have emerged as the government tries to ensure adequate energy flows to stricken areas where economic activity has stalled while longer-term plans for a recovery face the question of when it will come.

"I assume they are concerned that there might be short-term shortages of coal, if the economy recovers quickly as the virus presumably recedes," said Mikkal Herberg, energy security research director for the Seattle-based National Bureau of Asian Research.

"This is a profound challenge for the regime of President Xi Jinping, so I assume they would be extremely aggressive in ensuring supplies ramp back up in time," Herberg said.

The international effects of the sudden disruptions from the COVID-19 virus in the world's leading energy consumer could also last for some time.

All estimates of the economic impact of the epidemic are clouded by uncertainty.

"The working assumption in China seems to be, at the time of writing, that the virus will peak in mid-February and will be brought under control in March, allowing activity to return to normal in April," the Oxford Institute for Energy Studies (OIES) said in a report released this week.

Price distortions in energy markets have been dramatic, further complicating the outlook for China's emergency and longer-term plans.

The country's power producers have been whipsawed by conflicting signals during the epidemic. The early effect of the crisis was a slump in demand.

"Electricity demand, already weakening through 2019, is on the ropes," said an analysis by the international consultancy Wood Mackenzie last week.

While factories across China closed as a result of the holidays and the infections, the effect on demand in virus-hit Hubei province was particularly severe.

"By the end of January, peak power load in Hubei province dropped to 22.5 gigawatts, some 21 percent lower than planned," said Wood Mackenzie.

But power shortages became apparent by Feb. 4, when the official Xinhua news agency reported that the reservoir of the Three Gorges Dam had increased outflows to compensate for reduced coal inventories and power generation in Hubei.

The NEA also designated the industrial northeast region and the city cluster of Beijing, Tianjin and Tangshan as priority areas for more coal and power supplies, suggesting that shortages were widespread.

Officials were instructed to ensure smooth traffic flow between regions by road and rail.

This week, the Ministry of Transport ordered local authorities not to block expressways, highways or rural roads because of contagion fears.

But on Wednesday, Xinhua reported that two township-level CPC chiefs in Hubei were sacked for failing to enforce strict traffic controls.

In addition to such contradictory signs within China, major coal exporters are likely to face difficulties in meeting demand due to shipping backups, distribution hurdles and quarantine restrictions, a Reuters commentary said.

Before the outbreak, the country appeared to be well stocked with coal, considering that the economic growth rate dropped to 6.1 percent in 2019, the slowest pace in 29 years.

China's coal production rose 4.2 percent last year to 3.75 billion metric tons, the National Bureau of Statistics (NBS) reported. Coal imports of 300 million tons climbed 6.3 percent, according to Xinhua, while the growth of power consumption dropped to 4.5 percent from 8.5 percent a year before. 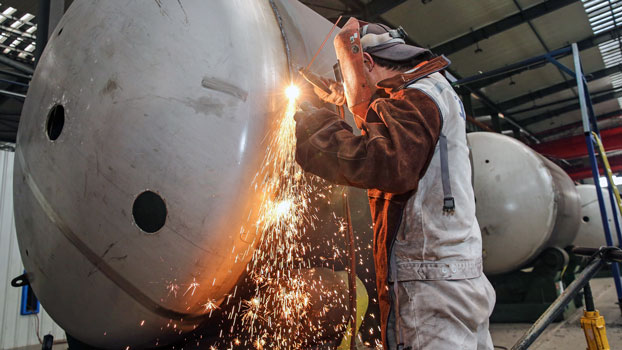 Impacts on oil and gas

The epidemic has also played havoc with the international oil market.

At the start of this week, world oil prices fell more than 20 percent from their recent peak in January to a 13-month low as Chinese demand plunged, Reuters said.

On Feb. 2, Bloomberg News estimated that China's oil demand had dropped by 3 million barrels per day (bpd), calling it "the largest demand shock the oil market has suffered since the global financial crisis of 2008 to 2009."

The estimate may represent the worst case for oil markets as a result of the crisis.

In its report this week, the OIES said the impact on China's oil demand could reach 3 million to 4 million bpd in early February, leading to a fall of at least 500,000 bpd in the first quarter from a year earlier. It added that China's refiners are set to cut production runs by as much as 2 million to 3 million bpd in February and March.

China's demand for natural gas is also expected to plummet. In January, even before the epidemic was taken into account, state-owned China National Oil Corp. (CNPC) projected that growth in 2020 would set the slowest pace in four years.

Since then, predictions particularly for liquefied natural gas (LNG) have turned decidedly dismal.

On Feb. 6, The Wall Street Journal reported that LNG prices for the Asian spot market had fallen to an all-time low of U.S. $3 per million British thermal units (mmBtu) from well above $5 per mmBtu in mid-January.

Earlier this month, Chinese LNG buyers contacted by Reuters said they were considering whether to delay incoming LNG cargoes or cancel them altogether by declaring force majeure, an internationally recognized exemption from contract commitments in case of uncontrollable events.

As China's demand weakens, foreign gas producers have been following the economic effects of the epidemic anxiously.

"The temporary cancellation of contracts would create new headaches for LNG suppliers, who are already grappling with record low prices in Asia following a mild winter and growing output from projects in the U.S. and Australia," the Financial Times said.

That report has sparked concern in Russia after it invested U.S. $55 billion (383 billion yuan) in its 3,000- kilometer (1,864-mile) Power of Siberia pipeline, which began pumping gas into China less than two months ago.

On Feb. 5, Interfax quoted an unidentified gas industry source as saying that China had not asked Russia's gas monopoly Gazprom to alter its schedule of pipeline deliveries.

There had been "no such initiatives regarding long-term pipeline contracts as of today," the source said.