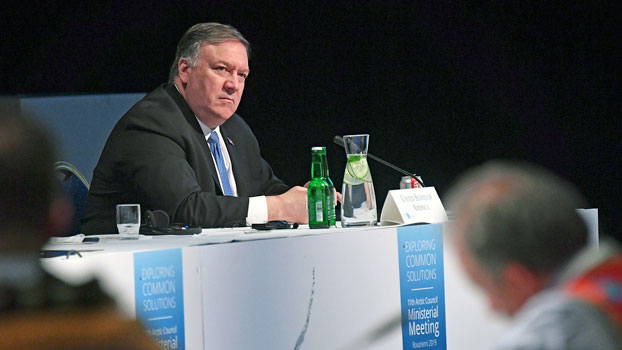 US Secretary of State Mike Pompeo takes part in the 11th Ministerial Meeting of the Arctic Council in Rovaniemi, Finland, May 7, 2019.
AFP

As China's investments and involvement north of the Arctic Circle rise, so has the opposition from the United States.

On May 6 at a session of the eight-member Arctic Council in Rovaniemi, Finland, U.S. Secretary of State Michael Pompeo delivered blunt and blistering criticism of China's plans to increase its role in the Arctic region.

"We need to examine these activities closely," said Pompeo, warning against "a permanent Chinese security presence" in the Arctic and "China's pattern of aggressive behavior elsewhere."

In a series of rhetorical questions, Pompeo asked whether member nations want to open doors to an Arctic version of China's Belt and Road Initiative (BRI) with the consequences of heavy debt burdens and asset takeovers, as in Sri Lanka.

"Do we want crucial Arctic infrastructure to end up like Chinese constructed roads in Ethiopia, crumbling and dangerous after only a few years? Do we want the Arctic Ocean to transform into a new South China Sea, fraught with militarization and competing territorial claims?" Pompeo asked.

"Do we want that kind of output in one of the most precious and pristine corners of the world?" he said. "I think the answers are pretty clear."

Pompeo also had strong words for member state Russia, which has stepped up military activities in the Far North, invited China to invest in infrastructure and promoted cooperation on a Northern Sea Route (NSR) through the thawing Arctic waters that it claims to control.

Much of the international press coverage of the Arctic Council's ministerial meeting focused on its inability to issue a joint declaration, reportedly due to U.S. reluctance to include references to climate change.

But Pompeo defended the U.S. record, calling America "the world's leader in caring for the environment" and citing a 14-percent drop in carbon emissions in the decade up to 2017.

The U.S. opposition to China's inroads in the Arctic covers a broad range of economic, environmental, and strategic concerns.

In his speech, Pompeo made clear that he sees China as an interloper in the Arctic despite its observer status in the council since 2013.

"There are only Arctic states and non-Arctic states. No third category exists, and claiming otherwise entitles China to absolutely nothing," he said, noting that China's nearest border is some 900 miles (1,448 kilometers) from the Arctic Circle.

In a white paper last year, China declared its interest as a "near-Arctic state" and an "important stakeholder in Arctic affairs."

In pressing its case for involvement, the paper argued that the opening of the Arctic "may have a huge impact on energy strategy and economic development in China, which is a major trading nation and energy consumer in the world."

Full members of the council with Arctic borders include Canada, Denmark, Finland, Iceland, Norway, Russia, Sweden, and the United States.

Despite the U.S. rebuff, China has been building Arctic-class icebreakers and invested "nearly (U.S.) $90 billion" in the Arctic between 2012 and 2017, Pompeo said.

He cited an annual Pentagon report on China's military power, warning that the country's research activities "could support a strengthened Chinese military presence in the Arctic Ocean," including deployment of submarines "as a deterrent against nuclear attacks."

"China will not interfere in the affairs that purely belong to the Arctic countries," Geng said.

"We are neither playing a geopolitical game nor making an exclusive small circle," he said in remarks reported by the official Xinhua news agency.

Some U.S. allies have also aired differences with Washington's stance.

At an Arctic Circle China Forum in Shanghai days after Pompeo's speech, Canada sent senior parliamentarian Andrew Leslie to voice Ottawa's willingness to work with China in the region.

"Let's focus on the positive that comes through international cooperation, and not so much on the saber-rattling," Leslie told The Globe and Mail. 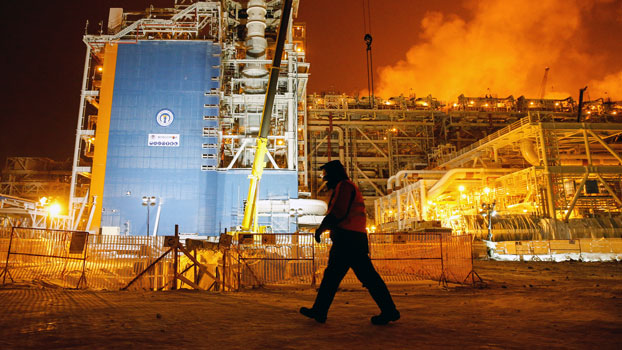 A view of the Yamal liquefied natural gas plant in the port of Sabetta on the Kara Sea shoreline of the Yamal Peninsula in the Siberian Arctic, some 1,550 miles from Moscow, Dec. 7, 2017. Credit: AFP

Mikkal Herberg, energy security research director for the Seattle-based National Bureau of Asian Research, also saw Pompeo's speech as an overreaction to China's involvement in the Arctic so far.

"Hard to know how to assess such a hysterical attack on China's modest role to date in the Arctic," Herberg said by email.

In 2016, the project also signed 15-year credit agreements for some U.S. $12 billion (82 billion yuan) with China Development Bank and China's Export-Import Bank, according to Interfax.

While terms for the second project have yet to be announced, the figures suggest that China's combined investments in the LNG ventures may be on the order of U.S. $25 billion (172 billion yuan).

Herberg said that China has made smaller Arctic investments in Iceland and Greenland, but nothing that would add up to U.S. $90 billion (619 billion yuan).

"Nothing approaching those kind of numbers," he said. "Even including their significant investments in building ice-breaking ships and polar research, you can't get to those numbers."

‘Underreported and of concern’

After an inquiry to the State Department, a public affairs official said the estimate was based on a 2017 study of Arctic investment conducted by CNA, a nonprofit research and analysis organization in Arlington, Virginia.

The 98-page study "found evidence that indicated that the scope of Chinese investment in the Arctic is both underreported and of concern."

But the study takes a more expanded view of China's Arctic involvement than its investment north of the Arctic Circle alone.

The analysts estimated that China invested over U.S. $1.4 trillion (9.6 trillion yuan) "in the economies of the Arctic nations" from 2005 to 2017, including U.S. $89.2 billion (613 billion yuan) "in infrastructure, assets, cooperative agreements, financing agreements, or other projects located within the 60 degrees north boundary drawn by this paper."

While the $89.2-billion figure was the basis for Pompeo's estimate, the 60-degree latitude is far to the south of the Arctic Circle by some 450 miles (724 kilometers).

Data tables in the study that support the estimate also include valuations of some non-Arctic assets.

The second-largest listed investment, for example, is CNOOC's acquisition of Canadian oil and gas company Nexen in 2013 for U.S. $15.1 billion (103.8 billion yuan), which includes access to production in the Middle East, the Gulf of Mexico, and West Africa.

At the time of the acquisition, Nexen's main Canadian assets were in northern Alberta, "not really Arctic," said Herberg. It is unclear whether any of the value from the Nexen deal should be included in the policy debate over China's Arctic role.

The largest Chinese investment listed in the study is for the Belkomur Railway, an unrealized project to link Perm in central Russia and the Arctic port of Arkhangelsk, with a total value of U.S. $20.6 billion (141.8 billion yuan), including 80 percent from "private sources."

Russia's TASS news agency reported in 2017 that China's Poly International Holdings Co. had confirmed plans to invest up to U.S. $5.5 billion (37.8 billion yuan) out of the total.

According to the study, the China Civil Engineering Construction Co. (CCECC) "committed to the ... project" in 2012.

But in April, Russian Deputy Prime Minister Yury Trutnev poured cold water on the venture as "not cost-effective" or "financially worthwhile," the website www.arctic.ru said.

The apparent roadblock casts further doubt on the estimate of Chinese Arctic investment cited in the Pompeo speech.

In response to questions about the details, spokespersons for CNA said the estimates in the study were "a snapshot in time" based on available reports that often lacked transparency.

"We approached this in good faith," a spokesperson said. "We acknowledge that the data sources were not that good."

While some of the details are problematic, Pompeo's speech may need to be viewed in the broader context of a continuing collision between U.S. and Chinese interests.

As Beijing expands its BRI investments and seeks new routes through the Arctic, Washington is bound to see the security implications of China's ambitions as a rising and far-ranging naval power.

But convincing U.S. allies to adopt common Arctic policies toward China may depend on more precise definitions of its activities and interests.

Increasingly, the Arctic is becoming an arena for economic opportunity, competition and security risk.