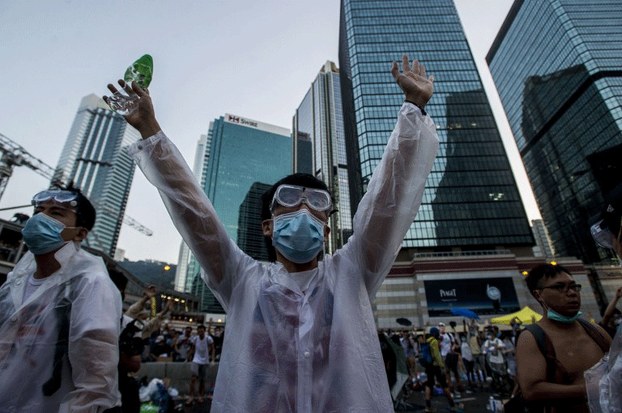 A pro-democracy demonstrator wearing mask and goggles to protect against pepper spray and tear gas during a rally near the Hong Kong government headquarters, Sept. 28, 2014.

Chinese President Xi Jinping is caught between a rock and a hard place as protesters occupy key parts of Hong Kong in their unprecedented quest for full democracy for the former British colony.

If Xi gives in to the demands of demonstrators for the resignation of the unpopular Hong Kong Chief Executive C. Y. Leung and for open elections for the top post in the Chinese semi-autonomous territory, it would deal a severe blow to his tough guy image.

It could also trigger copycat protests demanding political reforms on the mainland. Beijing has already taken pre-emptive action by censoring news and social media comments about the rare show of mass civil disobedience in Hong Kong.

On the other hand, cracking down on the mostly student protests would conjure up images of the bloody suppression of the 1989 Tiananmen Square protests in Beijing and draw global condemnation and sanctions at a time when Chinese industrial production has slowed to its lowest level since the 2008 global financial crisis.

The coveted status of Hong Kong as a regional freewheeling capitalist hub may also be shattered.

Beijing could try other options, such as confining the protests to a small area of Hong Kong and hope that they run their course—there is already a split in the pro-democracy camp and rumblings among traders about business being hit by the mass demonstrations—or it could set up a panel of the various political groups in Hong Kong to consider a way out for the territory's political future.

"None of the options is likely very attractive to the Chinese leadership," Elizabeth Economy, a China expert at the New York-based Council on Foreign Relations (CFR) said. "All come with not insignificant political and economic costs," she said in a blog post Monday.

Granting the protestors their biggest demand—an open slate of candidates determined by universal suffrage for the landmark 2017 election in Hong Kong—also "seems well outside the realm of possibility," she said.

But Economy appears hopeful of a peaceful resolution.

As the Tiananmen and Hong Kong protests are 25 years apart and in different parts of China—one in the capital on the mainland and the other in a business hub run as part of a "one country, two systems" model—"it leaves open the hope" that the current demonstrations "will not result in the same violent suppression that befell those in Tiananmen," she said.

Tensions are increasing, however.

Protesters have already occupied Hong Kong's busiest areas, including Admiralty, where the local government is based, the Central business district, the Causeway Bay shopping center, and the heavily-populated Mong Kok district in Kowloon.

Although riot police have mostly withdrawn following criticism over their use of tear gas and pepper spray on protesters on Sunday, the demonstrations involving tens of thousands are expected to snowball on China's National Day holiday on Wednesday, the deadline set by the Occupy Central civil disobedience movement for a government response to their demands.

It said "new civil disobedience plans" would be announced if the government refuses to budge.

Already facing violence in China's other autonomous regions in Xinjiang, Tibet, and Inner Mongolia, Xi could have averted the turmoil in Hong Kong.

"The events in Hong Kong this past weekend were as unfortunate as they were unnecessary," said Richard Bush, an East Asia expert at the Washington-based Brookings Institution.

He said it had been clear since 2012 on how to elect Hong Kong’s chief executive and that a sensible compromise was possible.

Such a scenario will allow competitive elections—the pro-democracy camp’s hope—without creating too much uncertainty or instability, which is Beijing’s fear, Bush said in a blog post.

Moderate democrats had proposed approaches that would have led to such a compromise, he said.

In the end, however, the Chinese government set electoral parameters that would allow a one-person, one-vote election, but would give it and its allies in Hong Kong a lot of control over who could run.

"With those rules of the game, Hong Kong’s radicals were empowered, and the instability that occurred last weekend was almost inevitable," Bush said.

"Beijing has been quick to blame the pan-democrats for the disorder, but it had the power and the opportunity to facilitate a good outcome," he pointed out.

With protests set to escalate, can Xi, who has emerged as China's most powerful leader since Deng Xiaoping, contain and neutralize them and avoid a contagion effect on the mainland?

“This is already much bigger than anything the Beijing or Hong Kong authorities expected,” Larry Diamond, a senior fellow at the Hoover Institution at Stanford University who studies democratic development, told The New York Times.

“They have no strategy for peacefully defusing it, because that would require negotiations, and I don’t think President Xi Jinping will allow that," he said. "Now, if he yields, he will look weak, something he clearly detests.”

Economy of the Council on Foreign Relations says there is no easy solution.

"[T]he best outcome for now might be to test the waters by replacing C.Y. Leung not with a lackey of Beijing or a democracy activist but with a politician such as Anson Chan or Christine Loh, who have impeccable political credentials, as well as strong managerial experience," Economy said.

"The next three years could then be a test case for what a more independent-minded Hong Kong leader might mean for the island’s relations with the mainland and provide guidance for further revisions to Beijing’s current limited conception of universal suffrage," she said.

"Hong Kong is not Beijing, and here is hoping that Beijing knows that too."

Zhang Dejiang and other followers of Jiang Zemin's "Shanghai Gang" clique within the CCP may have intentionally tried to stir up the Hong Kong protests by making the PRC rubber-stamp parliament take a hard line against Hong Kong's special status.