By the time Matt and I reach Ben Tre city on provincial roads, it's late afternoon. We have time to visit a park honoring "heroic women of the revolution" and take pictures of local people enjoying a stroll.
2005-09-23
Tweet

Eight in the series 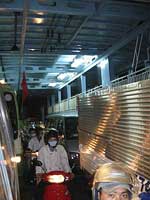 Vietnamese motorbikers on a ferry crossing the Mekong river. Photo © RFA/Dan Southerland
HO CHI MINH CITY — Then on to the city center, the scene of heavy damage following the Viet Cong's 1968 attacks. I see no war damage. We witness the same hectic commercial activity that animates Saigon, but on a much smaller scale.

Our motorbike drivers stop at a bus station and discover that we may have missed the last bus back to Saigon. But we keep circling the edges of the small city and race after one last minibus heading north. The minibus is empty.

We leap on before the driver has second thoughts. He takes off in a roar, blasting us with Vietnamese pop music. He's determined to prove that he can get to Saigon faster than anyone else on the road. But the Mekong River brings traffic to a halt.

Crossing the upper Mekong by ferry, we admire a sunset of pink, purple, and gold.

And as in Ben Tre province, I'm seeing beauty that I don't recall having seen during the war. I'm sure it was there before but I just couldn't see it. 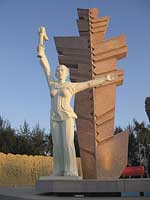 Statue honoring "heroic women of the revolution" in Ben Tre. Photo © RFA/Dan Southerland
Then on again at top speed to Saigon.

Less than two hours later, we find ourselves on the outskirts of the sprawling city of Saigon in a darkened parking lot.

Several motorbike drivers appear, arguing that we'll have to accept the fare they demand if we want to get to our downtown hotel. No more buses will be heading that way tonight, they say.

We bargain a bit but don't get very far. We close a deal, and two drivers take us at top speed, weaving in and out of a stream of motorbikes heading toward the city center. It's a holiday -- the 30th anniversary of the "liberation" of Saigon. Everyone seems to be in the streets, mostly on motorbikes.

I keep thinking that at this speed, we're going to have an accident. And no one I see is wearing a motorcycle helmet, including me and my madcap driver.

The driver nearly tips over as we grind to a halt at a traffic light. I help him steady the bike and then off we go again.

But it looks like Matt's having a great time. 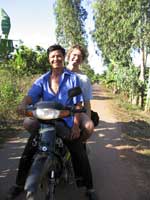 "It was so exhilarating," Matt says following our motorbike adventure, "to be around so many other bikes. The breeze, the lights. It was like I was the main character in a video game set in a futuristic city."

"I got a sense of life, especially when I saw four people on a bike, an entire family. People out to enjoy the night."

Our trip to Vietnam has had its disappointments. I discover that an old Vietnamese journalist friend has passed away. A Vietnamese Roman Catholic priest whom I want to meet is "under surveillance." I can find no way of locating my old Vietnamese language teacher.

Finally, I have to admit that I'm still obsessed with the war, refighting and rethinking the whole thing

But thanks to a little help from my son, I slowed down enough to linger over fine food, listen to some local music, and take in a sunset. I guess that's what a vacation should be all about.