Rule number one for foreign correspondents: If you want to know what's going on, get out of the cities.
Dan Southerland, Executive Editor
2005-08-12
Tweet

Sixth in a series 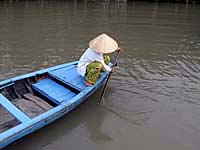 The Mekong is a world of water, boats, rice, fish-sometimes floods Photo: RFA/Dan Southerland Photo: RFA
In the case of Vietnam, Saigon, now formally known as Ho Chi Minh City, gives you no idea what a beautiful country this is. And this is one thing that I want my son Matt to glimpse before we end our brief tour here.

Matt and I join a trip from Saigon to the Mekong Delta, hoping to see the beauty in what was once one of the Delta's hottest war zones. We're heading for Ben Tre province, some 45 miles southwest of Saigon.

The Mekong Delta reminds you that most of Vietnam's people still make a living from working the land.

The Delta is the richest region in Vietnam, providing 50 percent of the country's rice and 60 percent of its fish, a main source of protein. Its 17 million people in nine provinces went through tough times for more than a decade after the communists took power in 1975.

The communists banned private ownership and tried to collectivize the economy. The result was food shortages and near famine. Normally rice-rich Vietnam became an importer of rice. 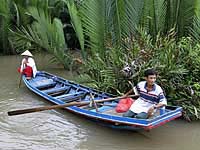 The Delta's Ben Tre province was once a hot spot during the Vietnam War Photo: Dan Southerland Photo: RFA
In the mid-1980s, the communists began to abandon collectivization and restore individual land holdings. The Delta's farmers diversified their production, and the Delta, with its bounty of rice, fish, and fruit, eventually bounced back.

Our host on this trip is an old friend who worked as an American aid worker in the Delta in the early 1960s, then covered the war as a journalist until the fall of Saigon, and now runs regular tours to Vietnam. Guiding off the beaten track has always been his first love.

I haven't been in the Delta in more than 30 years, and the changes I see are enormous. Our guide points out that the region's farmers have moved away from growing mostly rice and coconuts. We see fruit orchards everywhere along the banks of the river.

Among the crops are lychees, mangoes, jackfruit, durian, longans, and rose apples.

Entire islands that once were barely marginal have been turned into fruit farms.

Bustling My Tho, 40 miles southwest of Saigon, is now a port for a colorful fleet of fishing boats venturing into the South China Sea. Ice factories lining the shore supply them for their next trip out.

Just opposite My Tho, fish farmers in floating houses raise thousands of fish in large cages just beneath their living rooms. 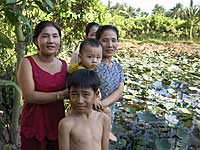 Vietnamese family near their lotus pond in the Mekong Delta Photo: RFA/Dan Southerland Photo: RFA
Further upriver at a small village, we come upon a fleet of refrigerated tractor-trailers loading up fruit and vegetables. I'm surprised to hear that they're heading all the way to southern China — ; a good five days away. Seafood travels the same way.

This part of the Delta with its orchards, lotus ponds, and emerald-green rice paddies looks like a piece of paradise. But I know from my reading that the Delta as a whole has problems that include annual floods, salt water intrusion, the overuse of pesticides that damage health and the environment, and the pressures of a growing population.

Too many people live on too little land.

By the late 1990s, according to one study, nearly one out of five farmers in the Delta had become a low-wage landless laborer.

Reminders of the Vietnam war intrude from time to time. We visit a hamlet, Ap Bac, where well-organized Viet Cong guerrillas first showed in 1963 that they could defeat a sizable force of U.S.-backed South Vietnamese troops. 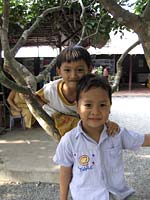 Children at the coconut candy shopPhoto: RFA/Dan Southerland Photo: RFA
We stop at Phoenix Island, once the home of a religious sect created by a small, wiry, French-trained Vietnamese engineer known as the Coconut Monk. The meditating monk's aim was to bring North Vietnam's Ho Chi Minh and South Vietnam's President Nguyen van Thieu together around an eight-sided conference table for peace talks. That was never to happen.

We travel in a minibus with several colleagues, including Tim Page, a photographer who was wounded four times during the war. Page recounts the time he was strafed by an American fighter-bomber when it accidentally attacked a U.S. Navy ship.

Finally, after a stop at a family-owned coconut candy business, we have a brief chance to explore the creeks and canals that crisscross Ben Tre Province. We glide in blue-painted boats with water-palm fronds on either side of a canal arching above us.

Then on to the village o333f Phu Tuc, where we spend the night at a family guest house. 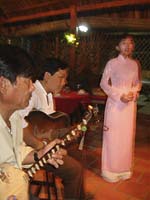 Vietnamese opera singer and musicians. Photo: RFA/Dan Southerland Photo: RFA
I look for signs of the war here, but there are none. And no one talks about it. As in Saigon, the people are friendly. On this night, the food tastes as good as the best food I’ve eaten in Asia.

We listen to southern Vietnamese opera music provided by a fine female singer backed by two energetic stringed-instrument players. I can understand only a few words, but their music is moving.

I'm sure that when we wake up in the village, I'll look for signs of the war again. But for now, as I fall asleep in a place of honor near to a decades-old altar to a family patriarch, the war begins to fade from my mind.

The Mekong's delta must be returned to Cambodia.