As Matt and I start talking with people around the city, my rudimentary knowledge of the Vietnamese language begins to revive. A small phrase book helps me out.
Dan Southerland, Executive Editor
2005-07-07
Tweet

Third in a series 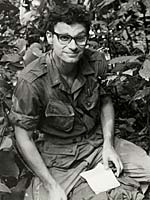 The author in Vietnam during the 1970s. Photo courtesy Dan Southerland Photo: RFA
Everyone, with few exceptions, seems happy to help me struggle along. I was never fluent in the language, but I knew enough to ask directions, conduct basic conversations, read signs and newspaper headlines, and, on occasion, get into trouble.

Now, I'm starting all over again. Each day new Vietnamese words pop up that I never knew were stuck - for more than two decades - somewhere inside my head.

My last visit to Saigon, now formally known as Ho Chi Minh City, was in 1982. That was 23 years ago.

After a day or two, I reach a point where I can have a little fun with the language. I tell Vietnamese, mostly in and around hotels and restaurants, how I left on one of the last helicopters from the U.S. Embassy roof in 1975.

They pay polite attention as I struggle on with my tale. Some seem amused. But for the most part, the people I'm talking with show no interest in pursuing the topic. After all, most of them, like more than half of Vietnam's population, were born after 1975.

My own son, Matt, 22, was born more than seven years after the war ended. That might just explain his detachment from a war that constituted a key part of my life as a young reporter.

I try a more provocative approach in my attempt to get a conversation going with Vietnamese on the subject. I begin telling people that I'm an American imperialist (de quoc My).

This brings puzzled looks and finally a comment from one of the taxi drivers: "You're not an imperialist. You're bringing business here!" 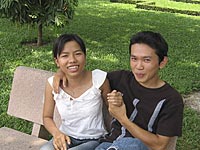 Young Vietnamese couple in a Saigon park Photo: Dan Southerland © Photo: RFA
I tell my story to a young woman working at a service desk at the Saigon airport and she quickly responds: "My father would have shot you!"

"Was he with the liberation forces?" I ask.

Yes," she replies, and then begins giggling, as if to say, "Yes, he was with the People's Army, and yes, you were the enemy, and finally it really doesn't matter to anyone any more."

The young people whom we meet seem to be doing fairly well. They work at decent jobs near the center of the city. But we're told that a sizable group of unemployed young people is missing out on the benefits of the boom.

I'm still unsure what will most interest Matt on this eight-day stay in Vietnam, but I decide that we had better find some way to talk about the war - the American War, as it's called here.

We begin by visiting the War Remnants Museum, not a visit that I'm looking forward to. The museum was formerly known as the Museum of Chinese and American War Crimes. I had visited an earlier version of the museum in 1982.

According to my Lonely Planet guide to Ho Chi Minh City, the name of the place was changed to the War Remnants Museum "to avoid offending the sensibilities of Chinese and American tourists." 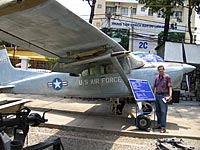 Blogger Dan Southerland with an old U.S. airplane at Saigon's War Remnants Museum. Photo: Dan Southerland © Photo: RFA
Many of the photographs in the museum were actually taken by American photographers, including photos of the My Lai massacre of May 1968 in which U.S. troops slaughtered more than 500 villagers in central Vietnam.

The museum prominently displays pictures of mangled bodies and napalm victims. South Vietnamese victims of North Vietnamese and Viet Cong attacks, such as the estimated 2,500 who were executed by the Communists in Hue in 1968, are nowhere to be seen.

I let Matt take his time, but I can't wait to get out of the so-called museum. Finally, on our way out, I ask Matt how he felt about it.