The Dalai Lama visits the border region where he crossed into India from Tibet 50 years ago.
2009-11-13
Tweet 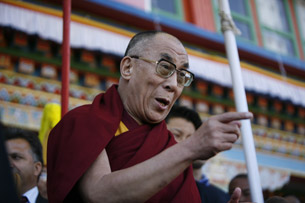 DHARAMSALA—The Dalai Lama returned this week to Arunachal Pradesh, the northeastern Indian state where he was delivered to safety by Tibetan resistance fighters 50 years ago.

At the end of his four-day visit, the Dalai Lama took a government helicopter to the border town of Bomdila, where he had received the historic telegram from former Indian Prime Minister Jawaharlal Nehru granting him political asylum after his flight from a Tibetan capital besieged by Chinese soldiers.

Today, the Chinese Communist Party shows no sign of softening its hardline stance on Tibet. Beijing has launched a series of virulent new propaganda assaults on the Dalai Lama, branding him a "splittist with evil intentions," while pressuring world leaders to cancel meetings with the Tibetan leader.

China most recently attacked the Indian government for allowing the Dalai Lama to journey to Arunachal—a Tibetan cultural zone Beijing now refers to as “Southern Tibet.” The name implies that this part of Buddhist Himalaya belongs by right to China, and the attacks prompted officials in New Delhi to cut their trip short and expel all journalists from the region Friday. 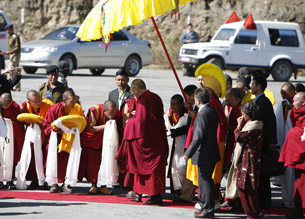 The Dalai Lama arrives in Arunachal Pradesh, India, Nov. 10, 2009. Credit: Abhishek Madhukar Abhishek Madhukar
While leading Buddhist teachings at Tawang Monastery, the Dalai Lama spoke to the few journalists permitted to report on his trip's efforts to restart dialogue on Tibet with the Chinese Communist Party.

“I want to share with you one quiet secret. In February 2006 we had a meeting with a Chinese official who acknowledged that 'the Dalai Lama’s side' was not seeking independence. But then, in April 2006, they intensified the accusation that I am a separatist."

"In the same year, the Nangpala shooting took place, so their whole policy become hardened, and they feel they can just continuously make these accusations,” he said, referring to an incident in which unarmed Tibetan refugees were shot and killed by Chinese border guards while trying to cross the border from Tibet into Nepal.

As exiled Tibetans ready for the return of the Dalai Lama to the refugee town of Dharamsala, perched high above the Kangra Valley, a spirited debate about the state of the Tibetan movement swirls through McLeod Ganj, the Tibetan market center near the Dalai Lama's residence.

“Fifty years have passed, and China has not changed its position on Tibet one inch. They are more irrational than ever,” said Lobsang Dorjee, a Tibetan activist based in Dharamsala.

“The language they use to describe the Dalai Lama has become more and more extreme. The 'Middle Way' approach makes maximum concessions to China. In return, we get nothing. They are even claiming that Arunachal and Ladakh belong to China. It’s like they’ve declared war over Tibet once again, years after the 1962 border war with India,” he said.

“I find it so painful to watch the Dalai Lama saying again and again that he wants peace with China, that he doesn’t want independence, while the Chinese attack him everywhere he goes,” said Tsomo, a nurse working in Lower Dharamsala. 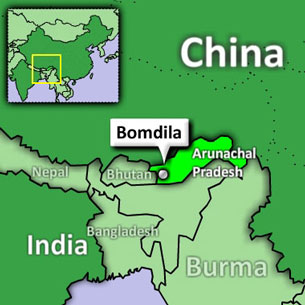 A map displays Bomdila in the Indian state of Arunachal Pradesh. RFA
“It’s not enough that China has control over Tibet. They want to destroy all the work the Dalai Lama has done here with the Tibetan refugees. They attack any [country] which supports Tibet, big and small. I am afraid of what China will do next. I don’t feel any Tibetan is safe.”

“The Dalai Lama owes it to the Tibetan people to face the harsh reality of what China is doing. We should thank China for politicizing the Dalai Lama’s simple trip to Arunachal, a place with special memories for him. It’s where he crossed onto Indian soil, and where his [earlier] incarnation, the 6th Dalai Lama, was born. China’s hysteria gave the story huge international coverage and exposed the Chinese government as petty dictators,” he said.

Many in Dharamsala express gratitude toward the Indian government for allowing the Dalai Lama to visit Arunachal, despite pressure from China to cancel the trip.

“In our demonstrations, we always shout, 'Tibet Ki Azaadi, Bharat Ki Saraksha,' which means, Tibet’s freedom is India’s security. It is in India’s interest to support the Tibetan cause. They shouldn’t be afraid.”

Who know how the US deal with local Indian people? kill the most and then say sorrow.finally, build a musuem for American Indians. comparing to that, Chinese communist part is really peace loving and human right protection. they just expeled few people and protec the most.

the life of Tibetans in China is better than minorities in India, so called a demcoracy. who pay attention to minorities in northeast part of India? Does foreigner has freedom to travl and visit in those areas?

It is sad to see the Chinese military in all Tibet. The Dalai lama is honored in Tibet, he takes his obligation to protect the Tibetans. But he can't fight a mighty
government. Trying by "middle way" is an option, but only with another democratic government in China.
In the meantime Tibetans are brutally arrested, taken to prison and executed.

china would not give up tibet. and china knows that india would not part away with anurachal pradesh, without a war, which both the countries would want to avoid. the main issue is china suspicion on india because of dalia lama presence in india. why not negotiate with chinese govt. and get rid of their suspicion in favor of settling the boundry issues.