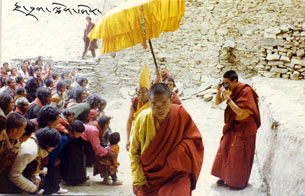 DHARAMSALA—U.S. President Barack Obama has now left Beijing, where he reaffirmed U.S. support for China’s view that Tibet is a part of China and then asked Chinese leaders to resume a dialogue with Tibet’s government-in-exile.

In response, Beijing criticized the United States for allowing “separatists”—in this case referring to Tibet’s exiled spiritual leader the Dalai Lama—to touch down on U.S. soil.

Though Obama declined to meet with the Dalai Lama when the Tibetan leader visited Washington in September, China’s leaders have since stepped up their attacks on him and curbs on the Tibetan people.

Gabriel Lafitte, an Australian Tibet expert, said here this week that China's growing nationalism is feeding what it most fears: nationalism in Tibet.

This follows a pattern frequently observed on the peripheries of empire, as excluded peoples assert their identity as a reaction to imperial arrogance, Lafitte said.

In the 50 years since the Dalai Lama fled into exile in India, a steady stream of Tibetan refugees has arrived in this Indian hill station—living witnesses to Tibetan resistance to China’s domination.

Ani Tsega, a Buddhist nun from the Kardze region of Kham, escaped from Tibet to Dharamsala in March 2009.

She brought with her the prison diary of Geshe Sonam Phuntsok, a Buddhist teacher who was born in Kardze in 1959, became a monk at 18, and traveled throughout Kham giving teachings.

“Geshe was very kind, and everyone loved him,” Ani Tsega said.

“He was called ‘the miracle’ because of his knowledge. He worked so hard to keep our language and religion strong.”

In 1996, Geshe Phuntsok went on pilgrimage to India where he met the Dalai Lama, and when he returned to Tibet he organized a large tenshuk, or long-life ritual, for the exiled spiritual leader.

On the morning of Oct. 25, 1999, a squad of Chinese armed police arrested Geshe Phuntsok at gunpoint.

When an estimated 5,000 Tibetans marched to the police station to demand Geshe Phuntsok’s release, Chinese security forces fired into the crowd of protesters, killing several.

Geshe Phuntsok was later sentenced to five years in prison for inciting “splittist activities” among Tibetans.

On tinfoil from cigarette packets, Geshe Phuntsok wrote an account of the tortures he endured, which he secretly passed to Ani Tsega when she visited him in prison.

He had been deprived of sleep, food, and water during eight days of interrogation, whipped with electric cords, and received severe injuries to his spine.

“When I saw him in jail, he couldn’t stand up or move his arm,” Ani Tsega said.

“I could see bruises and cuts on his face and body.”

After Geshe Phuntsok’s release from prison, Chinese authorities kept him under house arrest and refused him medical treatment for the abuse he had suffered in custody.

“We wanted to have a large funeral, but the Chinese did not allow it. I knew I had to escape to India so that people will know how the Chinese punish Tibetans who want to honor the Dalai Lama,” Ani Tsega said.

In his talks this week in Dharamsala, Lafitte said that Chinese Communist Party leaders know in their hearts that they can never win Tibetans over by coercion.

But they cannot imagine any alternative but to slog on, which Lafitte said he believes will only further unite Tibetans against them.

Maura Moynihan, a commentator and musician, has served as a consultant to the Rubin Museum of Art in New York City, America's largest Himalayan and Tibetan cultural institution. She has worked for many years as a refugee consultant in India and Nepal.

All nation must unanimously raise their voice for tibet, that is very much related to climate change issue which is a Big issueof these days.