Vietnamese followers of a leading Zen Buddhist seek asylum in France amid an escalating standoff.
2009-12-17
Tweet 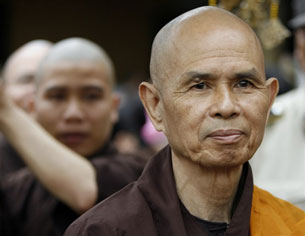 BANGKOK—An international rights group has called on the European Union (EU) and other donors to step up pressure on Vietnam after a standoff between government supporters and followers of a top Zen Buddhist during a visit by EU diplomats to his monastery.

Some 400 disciples of Thich Nhat Hanh, who has helped to popularize Buddhism in the West, were evicted from the Bat Nha monastery in Lam Dong province in September.

Since then, nearly 200 have taken refuge at the nearby Phuoc Hue pagoda, but they have been ordered to leave by Dec. 31 and are now seeking asylum in France.

“We must turn to you to ask for temporary asylum in France so that we can remain together.”

Elaine Pearson, deputy Asia director for the New York-based Human Rights Watch, said “mobs of 100 to 200 people … have moved in” to the Phuoc Hue monastery.

“They dragged the abbot out. They were shouting insults and demanding to expel the Bat Nha Buddhists,” she said, referring to disciples of Thich Nhat Hanh, a France-based Zen monk, peace activist, and confidant of slain U.S. civil rights leader Martin Luther King.

She said the mob had also assaulted those taking photographs, disrupting an EU fact-finding mission to the monastery, which was closely followed by a human rights dialogue with the Vietnamese authorities two days later.

“The European Union is one of the biggest donors [to Vietnam],” Pearson said.

“Given that this happened while members of the EU saw it with their own eyes, this really means that the EU needs to speak out strongly about what’s going on in Vietnam.”

Pearson called on Brussels, which has pressed strongly for religious freedom in Vietnam, to act ahead of a Dec. 31 deadline for the followers of Thich Nhat Hanh to leave the monastery.

The EU pledged U.$1 billion dollars in aid to Vietnam in early December.

“The fact that this could happen so soon afterwards, I think, makes it incumbent on the EU to be monitoring the situation,” Pearson said.

Venerable Thich Thai Thuan, the abbot of Phuoc Hue temple, said a group of people had “entered the monastery violently” during the EU visit on Dec. 9, demanding that he send away a group of some 200 followers of Thich Nhat Hanh.

“I refused to sign the paper and went into my room, but they pounded on the door, demanding that I send the [Thich Nhat Hanh followers] away immediately,” he said at the time.

He said the government was adamant that the monks should leave.

“There’s no way out. They exerted pressure from all sides … The [state-controlled] Central Buddhist Church ... says that they cannot stay at the temple,” he said, indicating that the violence had continued in the wake of the diplomatic visit.

“The mob came yesterday and smashed all the doors of the bell tower and lots of other doors and windows,” he said in a Dec. 11 interview.

“Many of them shoved the monks, and even spat on the heads of monk and nun followers of [Thich Nhat Hanh] who were sitting peacefully in Buddhist prayer.”

Eyewitness Bieu Nghiem said some of the attackers had been part of an earlier mob attack on the monastery on Sept. 27.

“One of the mob’s leaders was a woman who had splashed dirty water on us nuns,” she said.

“She was a leader of the mob and stood up to speak and interrupt the [Thich Nhat Hanh] followers who were trying to speak,” she said.

“She yelled out ‘Liar!’ and [demanded] that the followers leave the monastery.”

She said while EU delegates tried to calm the woman down so a discussion could begin, the leaders of the monastery were prevented from speaking.

“When the delegates were about to finish, the mob ran in and tried to force the abbot to sign a paper saying we would have to leave,” Nghiem said.

“The abbot refused to sign, and they forcefully pressured him for about two hours.”

“It was very noisy and distressing, but he still refused ... The mob included people who never go to the temple. The real Buddhists who go to the temple were pushed out, and could not attend the meeting.”

Vietnam’s communist government, which closely monitors religious affairs, had been trying to remove the monks and nuns from the monastery for several months.

The government accuses Nhat Hanh’s followers of sowing discord and defying central authorities by worshipping without official approval. The monastics say they followed all necessary procedures and only want to meditate and practice together.

The authorities have described the standoff as a conflict between two Buddhist factions.

But Nhat Hanh’s followers believe the government is cracking down on them because their teacher has called on the communist government to end its control of religion and disband its religious police.

YOU LIKE DEMOCRACY AND YOU HAVE SO MUCH HATRED IN YOU ALL… DEMOCRACY IS DANGEROUS BECAUSE OF YOU GUYS SO SINGLE MINDED. YOU LIKE ME TO BE LIKE YOU, AND THEN WHAT AM I? A SHEEP, REALLY I CAN NOT BE!

Thanks to the Queen Eliz really, she told me I am allowed to exercise what whatever mental I got and the people replying who were replying to this article is or are the same person pretending to insult me. That is fine, you have the right to do it and are the freedom I got the right to from the UK and I have always respected.

Edwin Tran, you should commend you and your family members to create An Asian Buddhist Human Rights to monitor Vietnamese police and army to abuse powerless people, will be a good idea. You do not know anything, let shut up your mouth, no one scolds you deaf. You're living in UK, how come you stupid guy know the present situation in Vietnam than us by reading on Internet or by your Viet Cong mentors? What is sad of you, all your relatives died in Vietnam by Ngo Dinh Diem regime, North Vietnam saved your life and put you on the throne? Please think about South Vietnamese sacrified to fight ruthless communist regime.

Only China, Vietnam, Laos and Burma should be in a group of Human Right Violators not Human rights protectors at all. Dont talk stupidly Edwin Tran. If you are mentally ill like Tran Huynh said so be silent and seeking treatment is better, do not keep it too long, it might be dangerous for your family and society. HRW working very transparently only violator countries such as China and our Vietnam do not satisfy.