Appeal to Vatican on Vietnam Land

A Catholic father in Vietnam asks the Vatican to intervene in a land dispute between the Church and the Hanoi government.
2008-09-19
Tweet 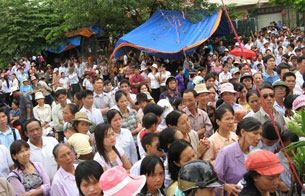 BANGKOK—A prominent member of a Catholic missionary order in Vietnam has called on the Vatican to intervene in a land dispute between the Church and communist government that has sparked months of protests and detentions.

"I really wish that the Vatican could intervene with the resolution of the dispute to avoid regrettable incidents," Father Pham Trung Thanh, whose Redemptorist order was founded in the 18th century to work with the urban poor, said in a telephone interview from Hanoi.

Vietnam's Catholics have staged months of mass rallies at several churches demanding the return of property confiscated during the 1950s land reform era.

Witnesses say dozens of Catholics have been detained, with some beaten, for taking part.

We have no intention to challenge or provoke anyone, nor do we create chaos in the country and society."

The focus of the dispute has been on a plot of land claimed by the parish of Thai Ha, in Hanoi, which was seized by the communists when they drove out the French in the mid-1950s.

The government has used most of the six-hectare (15-acre) property to build a hospital, a now-demolished textile factory, and other structures.

Father Pham Trung Thanh said the Catholic Church and his order had documents to show the land was theirs.

“We have plenty of documents to prove that, despite various events over the years, the land has never been placed under state management," he said.

"On the contrary, the Order and the Thai Ha Parish community have always been entitled to the ownership and use of the land,” Pham Trung Thanh said.

Pham Trung Thanh said he had filed a report on the protest to the Vatican, including an update regarding the office of the Vietnamese Church's envoy to the Vatican, the Apostolic Delegate.

"I haven’t received any response from the Vatican," he said.

The Vatican declined to comment. "The situation is being carefully watched," an employee who answered the phone at the Holy See press office said.

Hanoi's communist government has no diplomatic ties with the Vatican, although relations with the Holy See were seen as thawing with the visit to the city-state by Vietnamese prime minister Nguyen Tan Dung last year.

Government officials have slammed the Catholic prayer vigils as a form of political opposition to the state, calling on Vietnamese clergy to break up the protests.

Instead, several high-profile clergymen including Hanoi archbishop Ngo Quang Kiet and the bishop of the Thai Ha diocese, have voiced their support for the peaceful protests.

"We have no intention to challenge or provoke anyone, nor do we create chaos in the country and society," Pham Trung Thanh said.

"We simply want to express our beliefs. We just ask for justice peacefully. We just pray. We do not know what else we can do."

Catholicism, like all religion in Vietnam, remains under state control.

Pham Trung Thanh said he had held meetings with leaders of the government's religious affairs committee and public security bureau in Hanoi, where he called for the release of all detained Catholics and for an end to critical editorials in state-owned media.

The officials had promised to tone down media commentary, but no changes had been made, he said.

"I asked for their release. They all made promises. However, immediately following our meetings all state newspapers and radio stations continued to attack us more harshly while the detainees continued to be locked up," Pham Trung Thanh said.

"I think that it’s a matter of not keeping their promises. It’s very difficult for us to maintain a dialogue," he added.

"When I telephoned them with regard to their promises they cited so many reasons as to why they couldn’t deliver the goods."