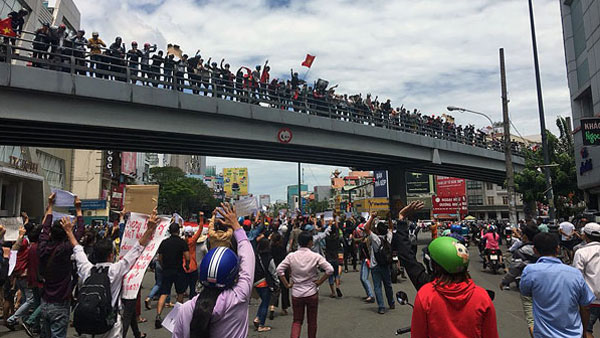 Vietnamese authorities have beaten and arrested a Vietnamese-American citizen who tweeted about clashes between protesters and police in Ho Chi Minh City over government plans to grant long-term leases to foreign companies operating in special economic zones, sources familiar with the incident said Tuesday.

William (Will) Anh Nguyen, a 32-year-old from Houston, Texas, entered Vietnam on June 9 and was detained the following day in Ho Chi Minh City, also called Saigon, for participating in the protest where dozens of demonstrators were taken into custody, with some assaulted by police, they said.

Nguyen is visiting Vietnam before he receives a master’s degree in public policy in July from the Lee Kuan Yew School of Public Policy at the National University of Singapore, said the sources who declined to be named.

During the weekend, thousands of Vietnamese citizens in Ho Chi Minh City, Hanoi, and Nha Trang in south-central Vietnam’s coastal Khanh Hoa province publicly demonstrated against the communist government’s plan to sign into law a decree on special economic zones (SEZs) amid fear that leases for periods as long as 99 years in the areas could go to Chinese-owned and operated firms.

Nguyen participated in the rally in Ho Chi Minh City and filed accounts of the events on Twitter because he is passionate about Vietnamese socioeconomic issues, sources said.

In one of several tweets about the protests, Nguyen said the Vietnamese were also demonstrating against encroachment by China and a cybersecurity bill that would further restrict citizens’ use of the internet. The proposed law requires companies like Google and Facebook to delete posts considered “threatening” to national security and to store users’ personal information inside Vietnam.

There was a report that police injured Nguyen's head while detaining him, and he is now believed to be held somewhere in Ho Chi Minh City, they said.

Nguyen's family has contacted the American embassy in Vietnam, but has not yet received a response, sources said. They are now in contact with U.S. congressional offices to exert pressure on officials in Vietnam to release him.

Even today, every VN southerner refers their beloved capital city as Sai Go`n. It’s a joke to call it HCM city! We wouldn’t piss on ole HCM if he is on fire. Matter of fact, he is on fire in hell right now.
About the article, let’s be honest about this, it’s true that RFA is ‘self-serving’ for it has its own agendas. Otherwise it wouldn’t be in ‘business’. Amid a nationwide chaos, isn’t it strange that thousand patriots were beaten somehow RFA was able to single out this one guy? Keep up with the good work RFA, the commies never rest either – review below.
Then, here come my ole nemesis (Despicable communist infiltrator) – Mrs Mary Fangs! She has been quietly monitoring RFA for years, its contents, and the people’s comments. I’m sure she records and reports everything to her ‘superior’. Of course, they are living comfortable somewhere in USA and very active too. Hence, her knowledge of Will. Of which, I believe isn’t totally correct – nice smoke screen!
My challenge for you ‘Mrs Fangs’; or whatever you name is; is to reconsider your beliefs and conscious. I know you have doubts about democracy and; after all; you are brainwashed by the communists, but there must be an ounce of love for VN in you. To me, that’s enough for you to realize that VN is in peril vs China – don’t fear them! For once in your life, focus on the real issue – the ‘Big picture’. It’s China dreadful ambitious – look what they have done to Tibet! Let’s join our people to fight for VN existence and cultures, and not to focus on the petty things that your ‘party’ have strong armed you into doing ever since you were a child. Believe me, don’t be a traitor, you don’t want to shame your parents or your family name – for we know!

Mary from USA that a lot of accusation without any proof just like Vietnam government officials.

Will Nguyen did not fly (Jun 9)in just to joint the protest, happening the next day. He was recruited by an Australia-based group to distribute monies to agitators and caught in the act of doing so. Check his FB account to see how he boasted about his upcoming trip!

It's perhaps the beginning of the end of Marxist-Lenininst regime in VN.More and more Vietnamese people will stand up for their right and fight for freedom and liberty.