Five Vietnamese Activists Will go on Trial in October 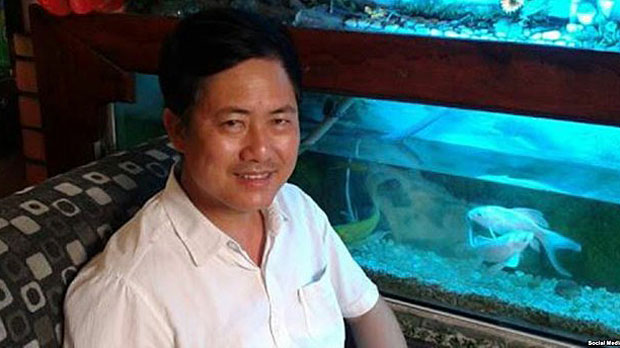 Luu Van Vinh is shown in an undated photo.
Photo provided by a citizen journalist

“Their offense is listed under Item 1 [of the article], which carries the harshest penalty, and authorities tend to hand down harsh sentences in cases concerning national security,” Manh said.

An activist charged last year under the same article, Le Dinh Luong, was handed a 20-year prison term after a one-day trial in August, Manh said, adding, “Therefore, [especially] in the case of Luu Van Vinh and Nguyen Van Duc Do, we are afraid that their punishment will be heavy, too.”

After holding Vinh down and beating him, “The police dragged him out without presenting any order, and they took away all the phones that were sitting on the table,” she said. “They took his friend too.”

Vinh and other group members had been active in protesting the government’s handling of a massive chemical spill in April that devastated the country’s central coast, killing an estimated 115 tons of fish and leaving fishermen and tourism workers jobless in four central provinces, sources said.

Manh said that though he has been allowed to meet with his clients, members of a civil society group called the Vietnam National Alliance of Self-Determination, those meetings have been limited to 60 minutes and are held in the presence of police.

“We do not agree with this, since the police will probably report back to the procuracy, the investigating agency, and even the court,” he said.

“Conversations between lawyers and their clients should be completely confidential, for if the courts know what is said, this will make things very difficult for the defendants’ lawyers.”

Also speaking to RFA, Le Thi Thap confirmed that her husband will go to trial on Oct. 5.

In the months following his arrest, though, her family has had to move from their home, and she has had trouble earning a living, she said.

Reported by RFA’s Vietnamese Service. Translated by An Nguyen. Written in English by Richard Finney.

This is bogus!
It's written in your goons' laws that everyone will be trialed and judgement shall be passed. And yet, you already locked up the accusers and threw away the keys!
I'm not sure how you goons equate 'speaking up on an environmental issues' to become 'overthrow a government'!
Oh, I'm sure your minds are running away with possibilities (none of them is good!) and accusing the innocents - the very people that love VN!
If you goons can't take criticisms then don't work for the government. Go back to your plow, would it be easier?
I would! I would rather be free than be burdened.