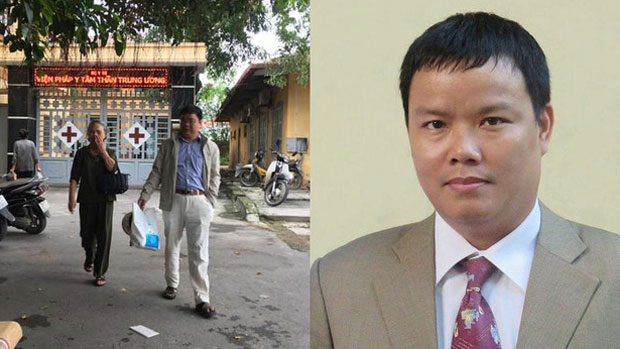 Prison authorities in Vietnam took jailed Vietnamese blogger Le Anh Hung back to a mental hospital this week after a brief return to the prison where he is awaiting trial on a charge of “abusing democratic freedoms,” a friend and fellow blogger said on Friday.

Speaking to RFA’s Vietnamese Service, Nguyen Vu Binh said that Hung has now been returned to Central Mental Hospital No. 1 in Hanoi, where he appears tired and weak and is being forced to take medication by injection.

Binh said that he and Hung’s mother, Tran Thi Niem, and brother had gone to the hospital to see Hung on Friday, but that only Hung’s family members were allowed in to visit.

“He is still in the hospital, and is being held in an area that restricts visits from the outside,” Binh said, adding, “Anyone who wants to visit with their family members has to register.”

Hung now lives with three others in a four-patient room. Binh said. “But it is just like being in another prison.”

On April 26, sources told RFA that prison authorities had returned Hung two days before from the hospital, where he had been held for observation for “delusions.”  It was unclear why, or on what day, he was then sent back again.

During a first period of forced observation in October 2018, Hung had gone on a hunger strike, but was fed by prison authorities by force through his mouth and nose “till he bled,” Binh wrote on his Facebook page following his attempt to see Hung on May 10.

Hung was then sent back to the hospital from April 7 to April 22, he said.

“Now, he is the hospital again, and is being forced to take medications for mental illness by injection.”

“Le Anh Hung asked his mother to tell everyone to help him end this forced treatment. He is worried that the medication will damage his health,” Binh said.

Le, a member of the online Brotherhood of Democracy advocacy group, was arrested in July 2018 on a charge of “abusing democratic freedoms” under Article 331 of Vietnam’s criminal code.

If convicted, he could serve up to seven years in prison.

According to New York-based Human Rights Watch, approximately 150 to 200 activists and bloggers are serving prison time in Vietnam for exercising their right to peaceful expression of their opinions.

The legacy of Hanoi Hilton lives on!
Actually, the same torture and harsh treatments that were put in prints by Lenin are still being applied.
Please pull your head out of the cesspool and look around the world!
I know deep down you dumb goons are observing and modeling after USA systems. So, here's a hint. The reasons USA is an epitome of democracy is that they believe and put in practice that government is of and by the people.
Until this is true, VNmese people will never cease the fight and struggle for Freedom and you pathetic goons are still the scums of society.
BTW, how do you goons sleep with 1 eye open?

Maybe you can feed him, shelter him and cover medical fees. Once he recovers you can also send him back to Vietnam.

Thanks to the rapid-response team at RFA, I realize that this guy is on his 3rd medical treatment round in 3 weeks? Subpar Vietnamese professionals are not obviously doing the job and he needs immediate American expertise to shake out of his "delusion" stage, facing reality... Please, advise Mr. Trump that we have a good immigrant coming!