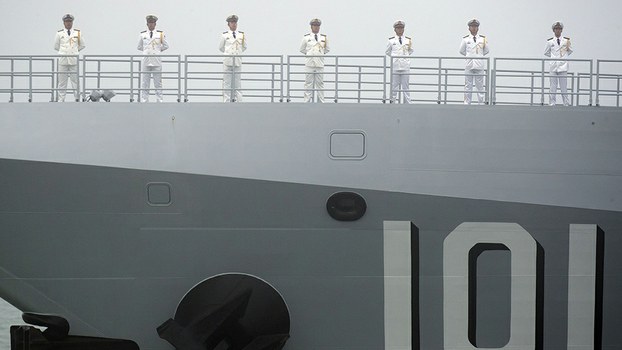 Chinese People's Liberation Army (PLA) Navy sailors stand on the deck of a new guided-missile destroyer as it participates in a naval parade in the sea near Qingdao, in eastern China's Shandong province, April 23, 2019.

A Chinese survey ship has returned to Vietnam’s territorial waters in the South China Sea after temporarily leaving the disputed Spratly Islands, Hanoi confirmed Thursday, calling the move a “serious violation” of Vietnamese sovereignty and demanding that the vessel withdraw from the area.

The Haiyang Dizhi 8, a ship operated by the China Geological Survey, had in July conducted a 12-day survey of waters near the Spratlys, with Chinese Coast Guard ships following in support.

At one point, China’s survey intruded into an offshore oil block in Vietnam’s exclusive economic zone (EEZ) off of the Spratlys’ westernmost reef, known as Vanguard Bank, leading to standoff near the area that touched off protests in front of the Chinese Embassy in Hanoi.

The Haiyang Dizhi 8 moved out of Vietnam’s EEZ on Aug. 7 and toward Fiery Cross Reef, a militarized reef occupied by China farther out in the South China Sea, but on Thursday, Vietnam’s Foreign Ministry spokeswoman Le Thi Thu Hang said that the survey ship had returned to the area last week under escort and demanded that it leave, according to state media.

“Vietnam has repeatedly communicated with China, demanding that it immediately end such serious violations, withdrawing all vessels from the EEZ and continental shelf of Vietnam, which are determined according to the provisions of the 1982 United Nations Convention on the Law of the Sea (UNCLOS),” Hang told a press conference in Hanoi.

“The Vietnamese side has also asked China not to take actions to increase tension, complicate the situation, and threaten peace, stability and security in the South China Sea, as well as in the region.”

Hang said that Vietnam’s maritime forces will continue to enforce and protect Vietnam’s sovereignty and jurisdiction in accordance with international and Vietnamese law.

She did not deny reports that Hanoi might refer the incident to the U.N. Security Council and consider suing China in an international court.

Hang’s statement followed one on Monday by Chinese Foreign Ministry spokesman Geng Shuang, who told a regular press briefing in Beijing that the Haiyang Dizhi 8 is “operating in waters under the jurisdiction of [China]” and calling on “the concerned country to respect that.”

Ahead of Hang’s press briefing, reports had circulated that Vietnam dispatched two warships to the Vanguard Bank to confront Chinese vessels, but the spokeswoman did not address the claims.

China claims the Spratly Islands along with the rest of the South China Sea—which Vietnam refers to as the East Sea—based on a sweeping U-shaped “nine-dash” demarcation line.

The line encompasses some 90 percent of the waters, including territory claimed by Vietnam, the Philippines, Brunei, Malaysia, Indonesia, Thailand, and Singapore.

The redeployment of the Haiyang Dizhi 8 also drew criticism from the U.S. State Department, which late on Wednesday issued a statement expressing concern over China’s interference with Vietnam’s oil and gas activities in its EEZ, and saying that the move called into question Beijing’s commitment to the peaceful resolution of maritime disputes.

“China’s redeployment of a government-owned survey vessel, together with armed escorts, into waters offshore Vietnam near Vanguard Bank on August 13, is an escalation by Beijing in its efforts to intimidate other claimants out of developing resources in the South China Sea (SCS),” said the statement, attributed to spokesperson Morgan Ortagus.

Ortagus said that in recent weeks, China has taken a series of aggressive steps to interfere with economic activities by members of the Association of Southeast Asian Nations (ASEAN) in an attempt to coerce them to reject partnerships with foreign oil and gas firms, and to work only with China’s state-owned enterprises.

In the Vanguard Bank, the statement said, China is pressuring Vietnam over its work with a Russian energy firm and other international partners.

China’s actions “undermine regional peace and security,” impose economic costs on Southeast Asian states by blocking their access to unexploited hydrocarbon resources, and “demonstrate China’s disregard for the rights of countries to undertake economic activities in their EEZs,” it said, noting that China had ratified the UNCLOS in 1996.

“The United States … strongly opposes any efforts by China to threaten or coerce partner countries into withholding cooperation with non-Chinese firms, or otherwise harassing their cooperative activities,” Ortagus said.

The standoff in the South China Sea has prompted rare demonstrations in August in Vietnamese cities, including the capital Hanoi and Ho Chi Minh City, to protest against what is seen as Chinese aggression and bullying in Vietnam’s territorial seawaters, especially concerning the disputed Spratly Islands.

Over the weekend, four activists in south-central Vietnam’s Khanh Hoa province were detained by police for staging an anti-China protest at a landmark popular with Chinese tourists in the provincial capital Nha Trang.

I believe China has made her points and incursions like this will be a norm and escalated!
So what are the Pacific nations and the Free World are going to do about this?
It's time for these nations to join a formidable force and with a unified 'mandate' to China to stay off and respect both maritime and country's sovereignty.
Also, the 'World Armada' needs to patrol in the Pacific as well before it's too late - 'deterrence is a stern visual reminder'!

Red Vietnam, what do you expect ? Red Chinese brutality is known to all. You both were close when they helped you run over your bothers and sisters of the south. Now they will run over you ! Change your course, change your system and form a new alliance unless you want to be another Chinese province. A lot to be done huh.