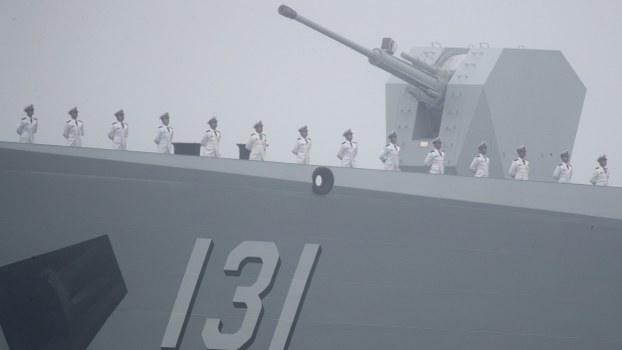 Chinese People's Liberation Army (PLA) Navy sailors stand on the deck of a new guided-missile destroyer as it participates in a naval parade in the sea near Qingdao, in eastern China's Shandong province, April 23, 2019.

Authorities in Hanoi shut down a rare protest on Tuesday by a group of 10 activists opposed to China’s survey of an offshore oil block located within Vietnam’s exclusive economic zone (EEZ) in the South China Sea, according to one of the activists.

The protest, staged outside of the Chinese Embassy by members of Vietnam’s “No-U” group, followed a Chinese survey in July of waters near the disputed Spratly Islands by the Haiyang Dizhi 8, a ship operated by the China Geological Survey, with Chinese Coast Guard ships following in support.

At one point, China’s survey intruded into an offshore oil block in Vietnam’s EEZ off of the Spratlys’ westernmost reef, known as Vanguard Bank, and vessels from the two countries have since been involved in a weeks-long standoff near the area.

On Tuesday in Hanoi, authorities forced the 10 activists to disperse within 20 minutes of them holding up signs and shouting slogans in protest of China’s actions in the South China Sea and calling on Vietnam’s government to file a complaint for international arbitration.

The group peacefully complied with the police order and no one was arrested, No-U activist Hoang Thi Hong Thai told RFA’s Vietnamese Service.

“We are very upset by Chinese aggression in the South China Sea and that the Vietnamese government has not taken a stand against it,” she said.

“The purpose [of our protest] was to demand that the Vietnamese government file a suit against China in an international court.”

Le Hoang, another activist from the group, said that police were considerate of their views and acted in a respectful manner when asking them to leave.

“They came out and asked us nicely not to protest and to leave the area,” he said.

“They acted in moderation, unlike the previous time we protested, when they tore down our banners and confiscated our video recorders. Such a response is uncalled for, but today was different, so I think they must have been instructed on how to react.”

The No-U group is named for the U-shaped “nine-dash” demarcation line that China uses to assert its claims to the Spratlys and the rest of the South China Sea—which Vietnam refers to as the East Sea. The line encompasses some 90 percent of the waters, including territory claimed by Vietnam, the Philippines, Brunei, Malaysia, Indonesia, Thailand, and Singapore.

Tuesday’s protest also came after Vietnam denounced the intrusions into its territorial waters by the Haiyang Dizhi 8 and Coast Guard vessels at an Association of Southeast Asian Nations (ASEAN) meeting in Bangkok last week, with Vietnam’s representative calling Beijing’s actions “illegal” and a threat to Vietnam’s sovereignty.

Speaking on July 31 at a meeting of ASEAN foreign ministers, Vietnamese foreign minister Pham Binh Minh demanded an end to what he called China’s “unilateral actions including militarization [and] increasing military exercises” in the South China Sea, and the Chinese survey a violation of Vietnam’s sovereignty and jurisdiction under the 1982 United Nations Convention on Law of the Sea (UNCLOS).

Earlier in the week, a Vietnamese fishermen’s group also upbraided China for Beijing’s intrusion into Vietnamese waters in the South China Sea, urging Hanoi at the same time to take a stronger line to defend Vietnam’s interests.

The two countries have a history of conflict over territory in the disputed waters, including a March 1988 confrontation at Johnson South Reef in the Spratlys that saw Chinese vessels sink several Vietnamese ships, killing 64 Vietnamese soldiers and wounding 11 others.

You seem to be happy when Chinese ships enter Vietnamese territorial waters, aren't you ? You should change your name to Mary Chinesesoup it'll be more appropriate.

RFA is happy that big crowd of 10 protested and unhappy that the police were so polite: not enough actions for bashing, today!Yep! Vietnam will sue China like the Philippines did and "enjoy" the fruits of their successes!