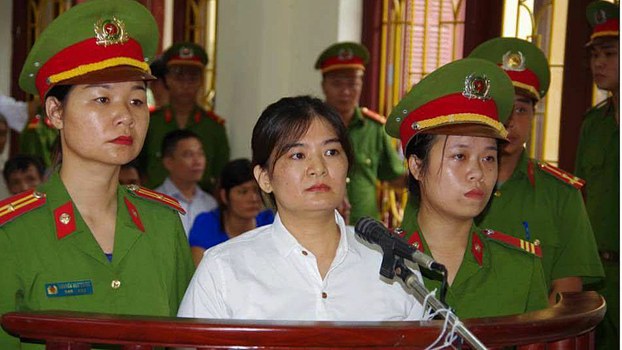 Jailed Vietnamese human rights defender Tran Thi Nga has received beatings and death threats from a cellmate assigned to her by authorities, her husband told RFA’s Vietnamese Service on Monday after writing a petition to law enforcement officials.

Noted in Vietnam for her online activism, Nga, 40, was sentenced in July 2017 to nine years in prison for spreading "propaganda against the state" under Article 88 of Vietnam’s penal code, a provision frequently used to silence dissident bloggers and other activists. Her appeal was rejected in December.

“On August 17, Nga called me and told me that she has been beaten and threatened to be killed. I decided to write a petition to authorities,” Nga’s husband, Phan Van Phong, told RFA.

Nga, who is allowed to talk to her family by telephone five minutes a month from Gia Trung prison in Gia Lai Province, had called home on July 26 and told her husband that she was placed in a cell with another prisoner, whose surname is Hai and is nicknamed Hai Ho.

Former prisoner of conscience Bui Thi Minh Hang, who served time at Gia Trung prison, told RFA that she knows Hai after sharing a cell with her.

“She is famous for being very aggressive and violent. They made me stay with her (and) she had threatened to kill me,” Hang told RFA.

“When I was there they (prison authorities) let other prisoners threaten me and attack me. I had to go on hunger strike for two months to protest,” she said.

“They (authorities) know everything and give other prisoners a signal to do such things because they are in charge of arranging our cellmates,” added Hang.

Amnesty International urged the Vietnamese community to “call and write to the Gia Trung prison urging them to ensure Tran Thi Nga’s safety.”

Meanwhile, in Nghe An province, Tran Huynh Duy Thuc, 52, started a hunger strike on Aug. 14 to protest police pressure on him to plead guilty in exchange for amnesty.

He was jailed in 2010 for 16 years for writing online articles criticizing the government under Article 79 of Vietnam’s penal code and is serving at Prison No. 6 in Nghe An province.

Thuc told his family that he’d rather stay in prison than plead guilty, he said.

“He’d rather stay in there until the end of his sentence. He said he is innocent,” said Tan.

Tan also told RFA that about two months ago the prison brought in a new manager, who created more difficulties for Thuc. He is now not allowed to write as many letters to his family as before, and his petitions to authorities have been limited in frequency.

“They had failed in pressuring Thuc to plead guilty, so they are resorting to their usual trick, which is to create more difficulties for him in prison,” activist Le Cong Dinh wrote on social media.

Tan said the family is worried about Thuc’s health because he looked very tired.

“He said that he would conduct a 10-day hunger strike, but his health got worse. We are very worried about his decision. We want him to stop the hunger strike soon to protect his health and his life,” the brother added.

Don't worry too much about this prisoner Nga, surviving "aggressive and violent" Hai Ho because Bui Thi Minh Hang not only made it out ok - she even gained weigh and looked better after serving her time! Furthermore and as the Mushroom is into her 2nd month of hunger strike, Bui Thi Minh Hang provides solid evidence of prison's health benefits: she was more than ok after 2 months of starving... Medical miracles do happen in Vietnam where RFA focuses its news of poor treatment!

Who's this?
Are you replacing Mary Fangs?
I believe you aren't smart as Mary Fangs, at least she can entertain us.
Beat it kid, go back to school, better yourself and flee from the communist goons.