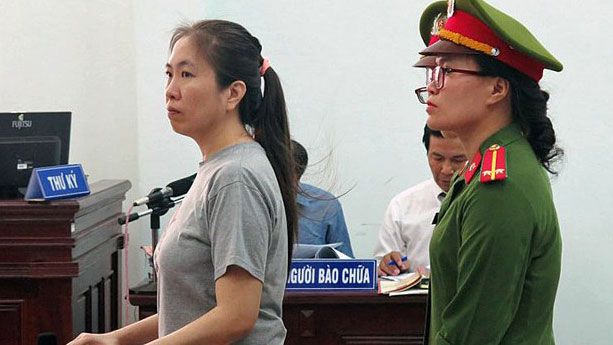 Quynh — who had published a blog under the  handle Me Nam, or Mother Mushroom — was arrested Oct. 10, 2016 and was sentenced in June 2017 to a decade in jail on charges of spreading “propaganda against the state” under Article 88 of Vietnam’s Penal Code.

Quynh’s mother, Nguyen Thị Tuyet Lan, visited her on Thursday at No. 5 Prison in Yen Dinh, Thanh Hoa province, in the country’s north central coast region, taking the blogger’s children to see her.

“Quynh told me that from May 5 to May 11 she was on hunger strike to protest the prison’s treatment and that she won’t eat any food provided by prison because she felt sick after eating the food,” Lan told RFA.

“She said her joints are all swollen and get worse when she has to lay on the floor,” added Quynh’s mother.

In February, Quynh was moved to Yen Dinh, more than 620 miles from her former location in the city of Nha Trang on the country’s south central coast without notifying her family, her mother told RFA at the time.

Another female political prisoner, Tran Thi Nga, meanwhile, has been cut off from seeing her family for several months as part of disciplinary measures, her husband old RFA on Friday.

A human rights defender noted in Vietnam for her online activism, Nga, 40, was sentenced on July 25 to nine years in prison for spreading "propaganda against the state" under Article 88 of Vietnam’s penal code, a provision frequently used to silence dissident bloggers and other activists. Her appeal was rejected in December.

Nga’s husband, Phan Van Phong, told RFA that he received a phone call on Tuesday from an anonymous woman who said she was Nga’s cellmate and had just been released.

“She called me and told me not to visit Nga this time because she is not allowed to see her family,” Phong said.

“I don’t know who that person is. She told me that Nga’s health is normal. I have not been able to talk to Nga over the phone since Tet festival (in mid-February),” he said

“She is not allowed to use her 5 minute phone call per month entitlement,” added Phong.

No reason was given for Nga’s punishment, but Phong said that prison authorities had told him before that Nga always displayed a “protest attitude” since she was brought to her current prison.

Phong added, however, that he still intended to take their two children to come see Nga in coming days.

Like Quynh, Nga was transferred to a distant prison without informing her family – a measure authorities use to increase prisoners’ isolation and make it difficult for family and friends to visit them.

Here I go thinking that only my university cafeteria foods were bad!
Sounds like uncle Ho foods are world worst – even made people sick afterward, you don’t say!
My guess is there aren’t any chefs in white apron preparing these meals. But I would bet there are devious goons cutting provisioning portion and pocketing the $$$. Also, there is a committee to ensure and apply routine scheduled ‘discipline programs’ onto the prisoners. You bet that these aren’t yoga, hair or skin treatment programs.
It’s so bitter to know that the goons have all these ‘rules and regulations’ for every occasion or case as if to protect citizen rights. However; in reality; they aren’t applicable – so why have it? Again, another cheap propaganda ploy!
Speaking of university, while attending there I met several VNmese students who were caught while trying to escape VN. They said; while in prison; that after the 3rd week, one’s hair will fall off, a weak later one will have legion, and a week later one’s joints will swell up for no reason. All are courtesy of Ho’s grand ‘integration discipline plan’.