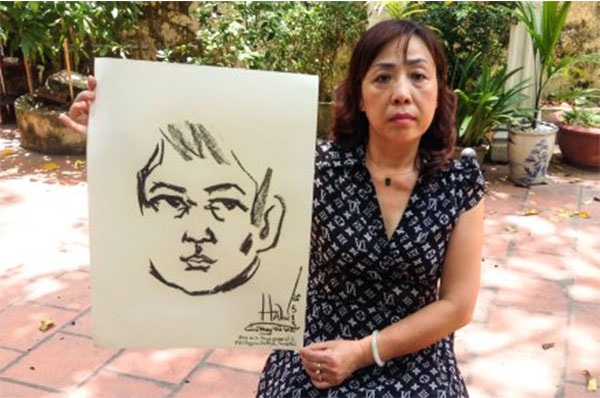 Jailed prominent Vietnamese dissident Cu Huy Ha Vu has begun another hunger strike—this time in protest against the seizure of his artwork he had drawn in prison, according to his wife.

The 56-year-old Vu, who had staged a 25-day hunger strike in June and a brief fasting protest recent, began the new protest on Oct. 15, his wife Nguyen Thi Duong Ha told RFA's Vietnamese Service on Thursday.

The prison authorities found at least one of his paintings sensitive as it had depicted his grandson using a key to unlock his chains.

Ha said Vu had given her the 45 paintings and four oil paintings when she visited him on Sept. 15, but that authorities seized the works on the grounds that they were “politically sensitive.”

“On Oct. 15, I visited him again and he told me that he had written a letter to the prison superintendent three days earlier asking that he return all of the paintings he had given to me,” she said.

“[Vu] told the supervisor that if he did not do so, he would go on another hunger strike starting on the evening of Oct. 15, because he knew I would come to see him on that day.”

When the superintendent refused to return the artwork to Ha during her visit this week, Vu began the strike, she said.

A well-known legal expert and dissident who had twice tried to sue the prime minister for abuse of power, Vu was arrested in 2010 over online articles calling for a multiparty state and is currently serving a seven-year prison sentence for “conducting propaganda” against the state.

Ha, who also represents Vu as his legal counsel, said she had been repeatedly denied access to her husband when she tried to visit him to work on his case.

“We really want the ministry of police to cooperate with Vu’s team of lawyers so that we can start the appeal process and he will be freed soon.”

Ha said that Vu had staged a brief hunger strike recently after prison guards refused to issue a document acknowledging they had confiscated Vu’s artwork, almost all of which were “drawings of his face and nothing else.”

The guards later issued him the document admitting they were holding the artwork.

The superintendent of the prison indicated that at least one of the paintings was “sensitive” because it depicted his grandson using a key to unlock his chains, Ha said.

Vu had also threatened to go on a hunger strike earlier this month after his request to convey his condolences by phone to the family of the late Vietnamese independence hero General Vo Nguyen Giap was denied.

The prison authorities later “gave in” to his request, Ha said. Giap passed away earlier this month at the age of 102.

Ha said that her husband had also indicated that his health was “not good” from his repeated hunger strikes and that he was suffering from high blood pressure.

“Vu said his blood pressure is high all the time, but he does not understand why the doctor keeps telling him it is [fine],” she said.

“He is very upset because of his rights being repeatedly violated—that is why he keeps going on hunger strike, which has led to his health deteriorating.”

In June, Vu staged a 25-day hunger strike after prison officials failed to respond to his complaints about detention conditions, in particular abuses by one of his guards that he says harmed his health and worsened his heart condition.

His action led several prominent activists in the U.S. and Vietnam to stage their own hunger strikes in solidarity.

Vu’s case had prompted calls for his release by the U.S. government, as well as global rights groups and bloggers inside Vietnam.

He is among dozens of dissidents and bloggers who have been thrown in jail since the one-party communist state stepped up a crackdown three years ago.

Reported by An Nguyen for RFA’s Vietnamese Service. Written in English by Joshua Lipes.