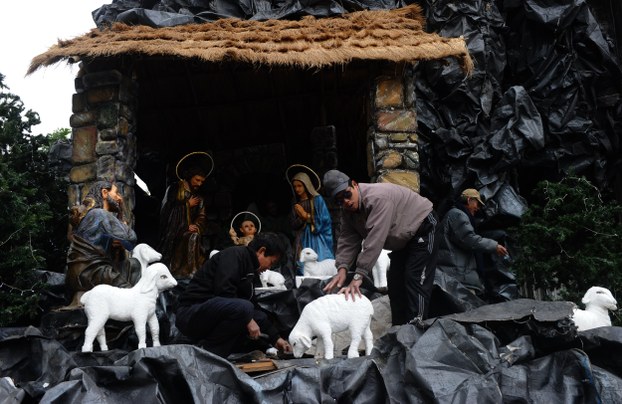 Workers install a model depicting the Christ's nativity scene on the door steps of Hanoi's Cathedral on December 16, 2014.

Authorities in Vietnam Sunday clashed with citizens over a Christmas nativity scene display in a part of Ho Chi Minh City that has been embroiled in a land dispute.

A group of Catholic residents of the Loc Hung Vegetable Garden settlement in Ward 6, the city’s Tan Binh district, were attempting to set up the nativity scene over the weekend, but police, plainclothes security agents and militia were dispatched to the area to prevent the display.

The residents then began to object, saying that authorities were violating their rights to religious freedom.

According to the Facebook account account ‘Vườn rau Lộc Hưng’ (Loc Hung Vegetable Garden’), the incident occurred at 9 a.m. Sunday when the local authorities pulled down a wooden frame that would have been a part of the display.

The Loc Hung residents resumed building their nativity scene in the afternoon, so the authorities came back to stop them.

The three were released by 10 p.m. that evening.

The nativity display’s statues of Christian religious figures Mary and Joseph were destroyed in the clash.

“By 3:30 p.m., we had gathered to pray and prepare to set up the nativity scene. After praying, a large force consisting of various Ward 6 agencies showed up to destroy [it],” He said, adding, “They beat us, drove [us] into corners.”

Pham said that the three were accused of inciting a ‘mass gathering to disrupt social order’ and were asked to cooperate in police reports at the Ward 4 police station.

Cao discussed how she was physically assaulted by authorities prior to her arrest.

“We only gathered there to protect the nativity scene,” she said.

“I stood behind to set up, but then a large force came along. I am 58 years old and I have really weak hearing. But I was beaten in the face and trampled,” said Cao.

“I felt a brick from somewhere hit my foot. It was so painful so I picked up the brick and threw it away and began to flee. That’s when they arrested me and accused me of throwing the brick [at them] which is an administrative violation,” she said.

“I replied ‘Absolutely not, I won’t pay even or you detain me, so I signed the report without any fear. I threw the brick because I was in pain from being beaten by them,” she said.

Pham Trung Hieu told RFA that while in detention the three had been threatened.

“Prior to letting us go, they told us that from that time on we should not follow Cao Ha Chanh (a longtime resident of the settlement) or anyone else [from there],” said Pham.

“In my opinion, they were only threatening us because we have been lodging complaints over the past 20 years [because of the land dispute],” he added.

RFA attempted to contact the Ward 6 People’s Committee and the Tan Binh district police Monday but received no reply.

Early this year, the area was a flashpoint in a controversial two-day operation in which authorities demolished at least 112 houses in the settlement claimed by the Catholic Church, displacing hundreds of residents, who sources say are political dissidents. Meanwhile, veterans of the former Army of South Vietnam made their homes in the settlement.

While all land in Vietnam is ultimately held by the state, land confiscations have become a point of contention as residents accuse the government of pushing small landowners aside in favor of lucrative real estate projects, and of paying too little in compensation to those whose land is taken.

Reported and translated by RFA’s Vietnamese Service. Written in English by Eugene Whong.