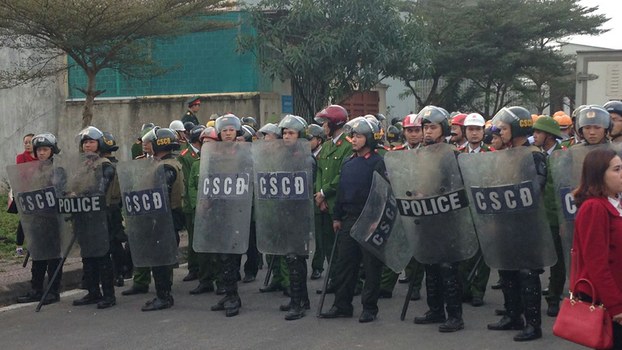 Authorities in Vietnam’s Nghe An province on Friday attempted to seize a parcel of land at the center of a compensation dispute over a development scheme, but left empty-handed after being confronted by residents who said it was illegal to evict them.

Local officials from the Vinh city government dispatched a phalanx of riot police to Nghi Kim commune’s Village No. 3 to seize the 500-square-meter (5,380-square-foot) parcel of land, according to state media, which had been earmarked for a “fire prevention” project.

Despite repeated attempts to resolve the dispute, only three families had accepted a proposed compensation package of 170 million dong (U.S. $7,485) for the plot, the report said, and police were sent to block off the site, announce the local government’s decision, and begin razing the land in preparation for a construction unit to proceed with the fire prevention scheme.

However, residents from the 54 households facing eviction for the project stood their ground, claiming the compensation was too low when compared to that offered for plots in other area projects, and that local official were acting in violation of Vietnam’s land laws by forcing them out without reimbursement.

The nonviolent confrontation ended with police leaving the site.

“I inherited this land from my ancestors, but today the fire prevention officials came to evict me from it, despite the fact that our village has not yet agreed to the compensation they offered,” one resident, surnamed Lieu told RFA’s Vietnamese Service.

“They have tried to do this several times, but I will fight to keep my land until my last breath,” she said.

Another resident, who spoke to RFA on condition of anonymity, said local officials were “seizing our land without having given us any compensation.”

“They are not following the law, they are just robbing us of our land.”

According to reports, the Nghe An Provincial People’s Committee in September 2016 designated the land from Village No. 3 to be used for the Vinh city government fire prevention project, and on Jan. 10, 2017 issued an order to evict the current residents.

On Nov. 25, authorities mobilized a group of police officers to force residents to accept the compensation scheme, but the villagers refused.

Earlier this week, Vinh city authorities held a dialogue with the residents of Village No. 3, but the two sides failed to reach an agreement.

Land disputes are the main source of protests in one-party Communist Vietnam, where dissent is not tolerated.

Such disputes accounted for 70 percent of all complaints lodged against the government in 2012, according to state media, and remain the top reason for complaints by Vietnamese citizens, Prime Minister Nguyen Xuan Phuc said at a meeting last month.

In early January, hundreds of signatories lent their support to a petition calling on Vietnam’s President Tran Dai Quang and the country’s Supreme Court to reverse a death sentence for a farmer who killed three people in a land dispute, saying the verdict in the case was too severe.

A court in central Vietnam’s Dak Nong province had sentenced Dang Van Hien, 42, to death for shooting dead three employees of the Long Son Limited Company and injuring 16 others in October 2016 when they tried to raze the cashew and coffee fields he had cultivated for years on the firm’s land in Tuy Duc district.

Hien’s sentence has drawn criticism from observers, who say the farmer was forced to defend his land because of the company’s wrongdoing, and that he should instead have been tried for “murder due to provocation” under Article 95 of Vietnam’s Penal Code, which carries a maximum seven-year jail term.

Two issues here, they are:
1/These goons have blasted through their PA systems for years as how precious is the land and labor is great for the country. Doesn’t that slogan transform the land into a premium commodity? Yes, it’s bitter, you have to eat your own dog food every now and then. If so, then why deflate the land values whenever the Party has a need to take it away from their owners? Don’t think that you are doing these people a favor. Don’t your parents teach you not to steal?
To me, sounds like you goons just like to pick/harass on any towns or hamlets that stood up against you. Do the decent things like asking for permission, have an alternative settlement for the people, and pay the right price, but you goons will never do that – heaven forbidden, what if the whole country found out! Your negotiation skills (jail and break people bones) and your stinking coffer will be vaporized – as if it isn’t already!
2/How come all the ‘factories’ are in the North (At least, the ones that we heard about.)? The South doesn’t deserve an employment chance?
Still harboring ill feeling about the South or you know that the Southerners are smarter than you goons and you can’t compete with them?