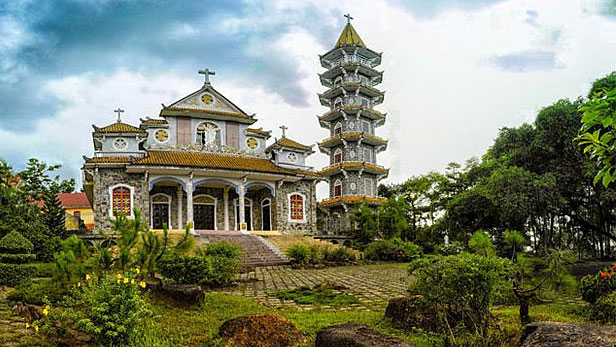 Vietnam's Thien An monastery is shown in an undated photo.
File photo

Protesters including police in plain clothes gathered in large numbers this week at a Catholic monastery in north-central Vietnam’s Thua Thien Hue province to demand the “return” of land from the parish church, where another mob had torn down a large cross three years ago, sources said.

Describing themselves as “spontaneous” groups, the protesters crowded the monastery’s Cross Hill on Aug. 10 and 11, demanding land used for decades by the monastery, though a local priest said the move may have been sparked instead by the recent placement of a memorial to the cross that was destroyed.

“Their goal was not to claim residential land,” said Vo Van Giao, a priest in charge of monastic training at Thien An. “They came because we set up a stone slab last week marking the history of the cross which was taken down.”

“The authorities were probably not happy about this, and so they incited the protesters,” Vo said, adding that the groups, including police officers dressed in plain clothes, had come from nearby Thuy Bang commune.

“That was the main reason, because actually we don’t involve ourselves in land disputes,” he said.

Thien An representatives had given monastery land before to local people in 1968 and 1975, Vo said.

“Families living near the monastery had also received land to live on, so how can Thien An monastery be said to occupy land belonging to Thuy Bang commune?”

“If local people actually lose their land, they should petition the local authorities for help, not come here to protest like this,” he added.

Reached for comment, an officer on duty at the Huong Thuy town police station near Thien An refused to discuss the protest, insisting that RFA journalists come to the station in person to ask their questions.

Earlier assaults at Thien An

Founded by French missionaries in June 1950, Thien An monastery is home to a community of priests, nuns, and seminarians who perform pastoral activities in three different churches.

In June 2017, police dressed in plain clothes attacked Thien An priests and their followers when the Catholics attempted to defend a cross they had put up on land claimed by the church, sources told RFA in earlier reports.

“They threw stones at the priests and beat three or four of them,” one source said, adding that the attackers were accompanied by women and unidentified civilians who helped police to pull down the cross.

In June 2016, police stopped Thien An priests from building a road leading to the monastery’s garden, prompting monastery head Nguyen Van Duc to petition national and foreign officials in Vietnam and at the U.S. embassy in Hanoi over what he called the illegal seizure of church land.

Authorities in Vietnam have long repressed the Catholic Church in the one-party communist state and subjected it to forced evictions, land grabs, and assaults by unidentified attackers on priests and their followers, sources say.

The U.S. Commission on International Religious Freedom (USCIRF) in an annual report in 2020 found “systematic, ongoing, egregious violations of religious freedom” meriting Vietnam’s reclassification on the U.S. list of Countries of Particular Concern (CPC) for repression of faith.