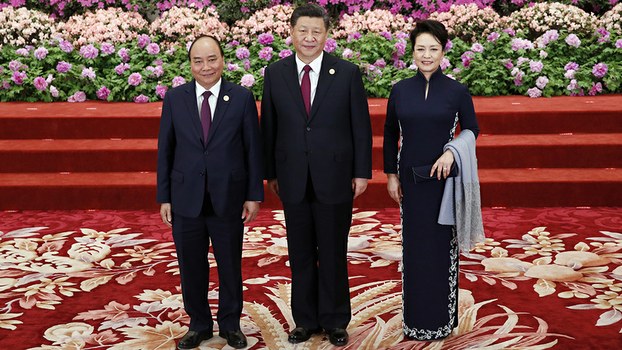 Vietnam's Prime Minister Nguyen Xuan Phuc (L) arrives at a banquet for the Belt and Road Forum hosted by Chinese President Xi Jinping and his wife Peng Liyuan at the Great Hall of the People in Beijing, April 26, 2019.

Observers in Vietnam are growing increasingly wary of Chinese President Xi Jinping’s sweeping Belt and Road Initiative (BRI) as Hanoi weighs collaboration on projects under the scheme amid concerns of falling into a “debt-trap” that leaves their government beholden to Beijing.

Xi is selling the BRI as a means of strengthening infrastructure, trade, and investment links between China and 154 countries and international organizations, at an estimated cost of around U.S. $1 trillion.

But critics of the BRI say China is using investment to push its own political agenda, and that nations involved in the initiative see their sovereignty undermined if they fall into a “debt-trap” that leaves them beholden to Beijing because they are unable to meet regular payments on loans and default.

Among the issues at play in Vietnam are infrastructure projects pursued by China, such as Vietnam’s proposed North-South Expressway, existing Chinese projects and their impact, government policies that are perceived as too beneficial to Chinese investors, and how mounting debt could force Hanoi to support Beijing’s interests in Asia, such as its disputed territorial claims in the South China Sea.

Dinh Kim Phuc, a researcher of the resource-rich South China Sea—where China’s claims overlap with those of Taiwan, Vietnam and fellow ASEAN countries Brunei, Malaysia and the Philippines—recently told RFA’s Vietnamese Service that Vietnam’s ruling Communist Party is “so far, on board” with the BRI, but said signing the agreement is not what is important.

“What is important is to what extent the initiative is implemented—and the ball is at the feet of Vietnam’s leadership,” he said.

“In my opinion, however, Vietnam’s leadership is now easily entangled in the ready noose of China, much like we have seen in African and other parts of the world.”

Vietnam’s Prime Minister Nguyen Xuan Phuc attended the second summit on the BRI in Beijing last month, along with dozens of world leaders.

“China provides high-rate loans and asks for employment of Chinese laborers, as well as use of Chinese technology to carry out the projects,” he said, citing the example of Sri Lanka’s Hambatota Port, which was leased to China in December 2017 for 99 years after Colombo fell into heavy debt to Beijing.

“Not only do these projects impact a nation’s economic and strategic security, they also affect society based on how Chinese companies run their operations and what Beijing’s goals are.”

Viet noted that the South China Sea is included as part of the sea route of the BRI, in what Beijing refers to as the 21st Century Silk Road of China, and warned that China would seek to control the waters through the influence it gains with infrastructure projects in the region.

“Researchers worry that China would use economic measures to tie the hands of Vietnam, as well as other ASEAN nations, leaving the South China Sea under Bejing’s sole control.”

A little over one month before Phuc flew to Beijing for the BRI summit, Vietnam’s government had also faced rare public criticism over reports in Chinese state media that a Chinese company is likely to win the contract to build the country’s proposed 1,940-kilometer (1,205-mile) North-South Expressway from Hanoi to Can Tho for an estimated 350 trillion Vietnamese dong (U.S. $15 billion).

The reports prompted a group of more than 100 individuals and seven global human rights groups to sign a declaration expressing concerns over Chinese management of a project along the coast with strategic implications for protecting Vietnamese claims in the South China Sea.

But they also blasted Chinese projects in other parts of the country, which they said “always have issues of cost and run overschedule.”

“Their trick is to bid with low prices but then delay in building, before cooperating with corrupt officials to increase the costs,” the declaration said.

“In fact, most of the Chinese projects are of bad quality, don’t adhere to safety standards, and create environmental pollution.”

The signatories said Chinese contractors routinely use out-of-date technology to build project with their own nationals as workers, who often stay around after the projects are complete, “creating many issues for society.”

They demanded a public referendum, open to experts both inside and outside of Vietnam, and called on the government to also consult contractors from the U.S., Japan, and France.

“To find the best solution for the project, stop using Chinese contractors and stop borrowing money from China,” the declaration said.

Professor Hoang Dung, one of the signatories, told RFA at the time that “every project with Chinese as the main contractors always leads to losses.”

“The bidding process has to be transparent so people are made aware, but they typically announce a winner before the bid is even opened. This is totally unacceptable.”

Other frustrations surrounding Chinese investment have boiled over in connection with the Vietnamese government’s plan to sign into law a decree on special economic zones (SEZs), amid fears that leases for periods as long as 99 years in the areas could go to Chinese-owned and operated firms, and undermine Vietnamese sovereignty.

On June 9 and 10 last year, thousands of Vietnamese citizens in Ho Chi Minh City, Hanoi, and Nha Trang in south-central Vietnam’s coastal Khanh Hoa province publicly demonstrated against the SEZ law and the recent adoption of a controversial cybersecurity law.

After the demonstrations, police detained hundreds of protesters and said evidence showed they were incited to “anti-state actions” by organizations based in other countries using false information about the SEZ bill.

The bill has since been shelved, pending further discussion in Vietnam’s rubber stamp parliament, the National Assembly.

A court in Binh Thuan province on Tuesday sentenced 19-year-old Dang Ngoc Tan to 17 years in prison and 31-year-old Pham Thanh to 11 years in prison for “deliberate destruction of property” after they were found guilty of burning six cars during the protests. They had already been sentenced to four and four and a half years in jail for disrupting public order at a trial in September.

Reported by RFA’s Vietnamese Service. Translated by An Nguyen. Written in English by Joshua Lipes.

If the VCP continues to cling to China to maintain its power, sooner or later Vietnam will, like Cambodia, become a modern Chinese colony.

It isn't a secret that VNmese communists are traitors and they are selling the country to China so they can maintain their seats in the parliament regardless of the outcome.
They are spineless! This is why we don't make a pact with the devil! Get ready folks, the sooner you learn Chinese the better - so you can read the street name! It's so shameful.

Go China to take Vietnam as soon as possible. Teach Vietnam how is suffering of losing country . To be fair for Dega people lost it country to evil communist Vietnam.

I strongly 'hate' communists period! And, also, any forms of injustice.
Believe me, I totally understand your feeling vs. the VNmese communists - I have them too! But, I'm not sure how having the Chinese takes over VN will help or improve anybody problems. To me, at the end of the day, we are going from a wanna-be dictator to a worldly ruthless dictator with amass weapons of destruction!
Please, think clearly, this is what hate does! It takes you out of your characters - which are reasoning, kinds, peaceful and caring.
Don't be like our enemy, we should and will rise above them!
My father commands and serves the VNmese ethnic minority for years (sorry, I don't know of the tribe). He loves and respects them dearly.
I happened to be on a plane that flew VNmese ethic people to MN. I calmed and played with the children while holding the weeping mother hands. We couldn't understand each other, but our humanity and love were there.
So let's see clearly through these pains and focus our energy and thoughts on the real culprit.

The benefit Vietnam might get from the China-USA trade war can come to zero because China will kill Vietnam before it knows it.