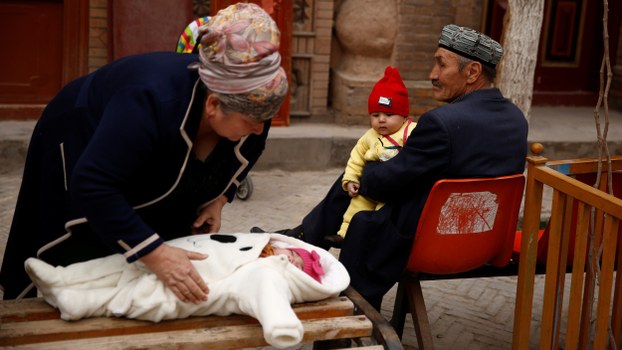 A woman dresses a baby in the old town of Kashgar, in China's Xinjiang Uighur Autonomous Region, March 22, 2017.

Uyghur women who are forced to undergo birth control procedures in northwest China’s Xinjiang Uyghur Autonomous Region (XUAR) are rarely informed about their side effects, and regularly experience lifelong health complications they believe are related to the surgeries, according to sources in exile.

Several Uyghur women who were required by authorities in the XUAR to have intrauterine devices (IUDs) implanted or undergo tubal ligation surgeries as part of family planning policies detailed their experiences to RFA’s Uyghur Service.

They described in recent interviews painful procedures that left them both physically and emotionally scarred, and suggested such measures are part of a bid by the government to eradicate their ethnic group.

Their stories follow a June 29 report about a dramatic increase in recent years in the number of forced sterilizations and abortions targeting Uyghurs in the region, which the author, German researcher Adrian Zenz, said may amount to a government-led campaign of genocide under United Nations definitions.

The population control measures include fines on Uyghur women with three or more children, mandatory pregnancy tests and examinations, and the forced implantation of IUDs or sterilization surgery, according to Zenz, a senior fellow in China Studies at the Washington-based Victims of Communism Memorial Foundation.

China did not make a spokesperson available for comment on this report, but when Zenz’s study on forced birth control came out in June, official media vilified him and said Beijing is ‘considering suing’ him for libel, while the foreign ministry denounced him.

“The so-called allegation that ‘millions of Uyghurs were detained’ was trumped up by an anti-China organization which receives significant financial support from the National Endowment for Democracy, and Adrian Zenz, a senior fellow in a research group on Xinjiang education and training centers set up by the US intelligence community,” foreign ministry spokeswoman Hua Chunying said on July 15.

The uptick in forced population control policies, which the report said had led to an 84 percent birthrate reduction in two majority Uyghur prefectures between 2015 and 2018, occurred in tandem with China’s campaign of mass incarceration of Uyghurs launched in the region in April 2017.

Women who refuse to undergo the procedures are detained in a network of internment camps, believed to have held up to 1.8 million Uyghurs and other Muslim minorities.

Recently, a source who asked not to be named out of fear of reprisal sent RFA photos of an IUD that had been surgically removed from her uterus 10 years after it was implanted because she experienced severe vaginal bleeding. The woman said she had been detained at a camp but was released after the bleeding became very serious.

According to the source, doctors performed a four-and-a-half-hour surgery to remove the device and discovered that it had punctured her uterus, causing an injury they said would likely leave her sterile.

A similar story was related by camp survivor Zumret Dawut, who last year testified about having undergone a permanent sterilization surgery at a United Nations event titled “The Human Rights Crisis in Xinjiang,” which was organized by the U.S. Department of State.

Dawut, mother of three, told RFA that she was fitted several times with an IUD, which she described as T-shaped and wrapped with a wire.

“If the government does the insertion, it’s that kind of IUD,” she said.

“You used to be able to get them removed if you could get a doctor’s permission for it. But then, starting in 2016, [the government] notified all the hospitals that they could not remove IUDs.”

Dawut said at that point, women seeking to have an IUD removed would need to obtain permission from five different government offices, including the Women’s Association, the Office of Women’s Affairs, and the Office of Family Planning, “otherwise [doctors] wouldn’t do it.”

“I’ve had several IUDs, but the experiences weren’t good,” she said.

“They caused a lot of problems for me. I passed out, lost consciousness, several times after the insertions.”

Gulgine, a Uyghur doctor and women’s health specialist based in Istanbul, Turkey with more than 25 years of experience, told RFA that since she began running her health center in 2013, she had seen “at least 200” Uyghur women fitted with IUDs, as well as some 80 Uyghur women who had been forcibly sterilized.

“There have been some cases in which women with IUDs have ended up with the IUD stuck in their uterine walls,” she said.

“I’ve also seen cases in which the women had no clue they’d been sterilized. Eighty percent of the [Uyghur] women I’ve seen have had IUDs. Sixty percent have been sterilized … For these reasons, I’ve seen women who not only have physical injuries but who also have psychological problems.”

Gulgine said that IUDs are especially prevalent amongst women from the southern part of the XUAR, where Uyghurs live in greater numbers.

“The Chinese government widely forces these IUDs on Uyghur women in places in the south like the cities, towns, and villages of Kashgar (in Chinese, Kashi) [prefecture],” she said.

“The longer the devices remain inserted, the greater the possibility of injury to the cervix, which can result in inflammation, swelling, discharge, or infection … These kinds of IUDs are very low-quality, and after they are inserted there is a possibility that they will get stuck in a woman’s fallopian tube, making them even more difficult to remove down the line.”

Gulgine suggested that the Chinese government is unconcerned whether such devices inflict permanent damage on the women who are made to wear them.

“By causing injury to their reproductive systems, [the authorities] are achieving their goal of exterminating them,” she said. 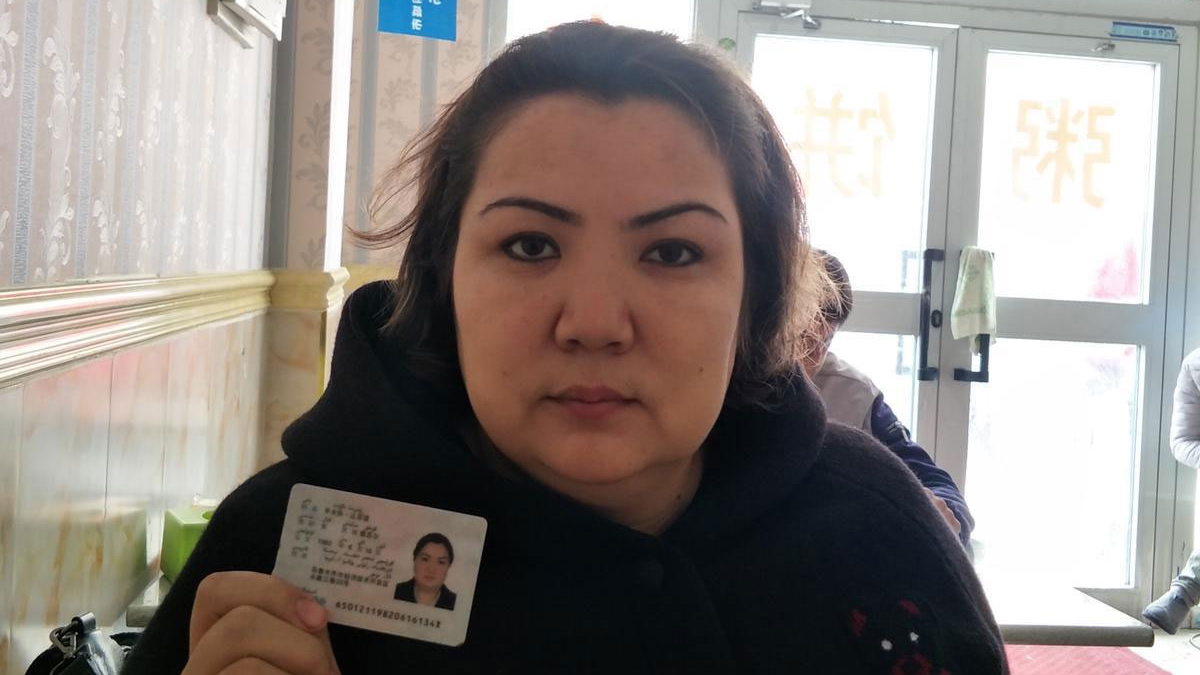 While IUDs are the most common form of birth control used by authorities to implement family planning policies, tubal ligation—in which the fallopian tubes are tied and sometimes cut—is another favored method.

In April 2018, Dawut was detained at an internment camp, where she was forced to recite Chinese propaganda, beaten for providing food to an ailing fellow prisoner, and injected with unknown drugs, according to her account at the U.N. event.

While Dawut was released two months later after her Pakistani husband advocated on her behalf, she was forced to undergo a tubal ligation in exchange for the right to leave China for Pakistan, which she said was performed in a “crude facility” by doctors who did not provide her with information about how it would proceed, or what the risks and potential side effects were.

“In October [of 2018], it turned out my name was on some list that had come from higher up—there were around 200 names on the list, and they scheduled five of us to take for sterilization surgeries on a Monday,” she said.

“There were women from other places there too. We waited in line for a long time. There weren’t people from any other ethnic group; all of us were Uyghur women ... [After the surgery], they had a car ready for me. They put me in the car and took me home.”

Dawut, who relocated to the U.S. from Pakistan in April last year, said that since the procedure, she has experienced negative side effects including a hormone imbalance, a total cessation in menstruation, and psychological trauma.

She said she asked a Uyghur gynecologist whether it was possible to reverse the procedure, but was informed that while surgeons can “untie” fallopian tubes that have been blocked in most tubal ligations, Chinese government-ordered surgeries generally involve the cutting of the tubes, making it much more difficult to undo.

“So, given this, [it appears] they made it completely, irreversibly impossible [for those of us who underwent the surgery] to have more children,” Dawut said.

“They want to get rid of us and take over our land. They want to eliminate us from this world.”

While China’s methods of birth control in the XUAR have received increased attention following the release of Zenz’s report, they are by no means recent developments.

In 2007, for example, family-planning offices in Xinjiang held a propaganda “competition” by the name of “Birth less, get richer faster,” in which they rewarded women who had fewer than three children or who elected to have tubal ligation surgeries performed.

Peride Tursun, who fled the XUAR capital Urumqi for Turkey in 2016, told RFA she ran afoul of family-planning authorities in 1996, when she was pregnant with her third child, a son. Tursun, who was herself a former family planning official, said that she gave birth in secret but was fined and forced to have an IUD implanted by doctors who provided her little information about the procedure.

“They simply told me they were going to make it so I couldn’t have another baby,” said Tursun, now 55 years old.

After she experienced heavy bleeding, she had the IUD removed by doctors at the XUAR Hospital of Traditional Medicine, who performed a sterilization surgery on her without her permission.

“I kept asking myself, ‘Can we not just be responsible for ourselves?’... I felt feelings of tragedy, like a kind of massacre was taking place,” she said.

Tursun said she has since had a dermal reconstruction surgery, which she suspects is related to the complications she experienced from her IUD and later sterilization.

Meanwhile, Tursun’s two older daughters remain in the XUAR and have been sent to internment camps, she said.

“The Chinese authorities used these horrible means to destroy my life, but I have my daughters and my grandchildren [to think about],” she said.

“I might not have been able to protect myself, but it is my responsibility as a mother to do everything I can to protect them,” Tursun added, calling on the international community to investigate and “put an end to these policies.”

RFA also spoke with Helchem Muhammad, 55, who has lived in Kayseri, Turkey, since 2014.

Muhammad, who is originally from Aqsu (Akesu) city, said she first became a victim of China’s birth-control policies in 1992, after giving birth to her fourth child.

“The family-planning authorities came to my house every day and were putting a lot of pressure on me, so finally I was forced to get [an IUD],” she said.

“They said they’d fine me [otherwise] or that we [who didn’t comply] would go to jail, and they scared us into getting them.”

Muhammad said she experienced severe bleeding for two months, after which the IUD fell out. A second IUD also caused bleeding and made her “very sick.”

“Even so, I had no choice but to get the IUD,” she said, adding that treatment at hospitals and traditional medicine practices had done little to improve her health.

Muhammad said that while the international media has been focusing on China’s enforcement of birth control policies in the XUAR since 2015, “the situation was already serious in the 1990s.”

“You know, there were cases where doctors used injections to abort babies in the mothers’ eighth and ninth months of pregnancy and later, when they began inserting [IUDs], they all used this [T-shaped] type because it’s tough to get out,” she said.