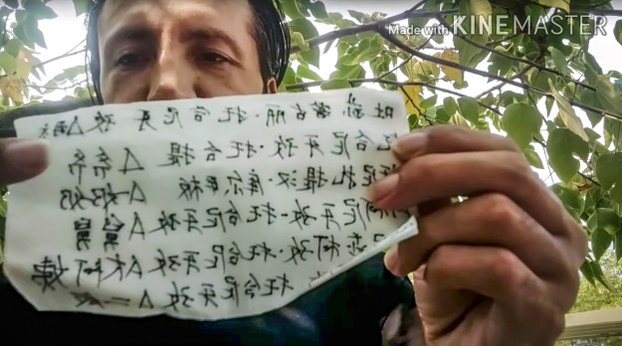 Miradil Hesen displays a Mandarin Chinese list of names of family members who have been targeted by authorities in Xinjiang in a video shot in selfie-mode, in China's Jiangsu province and posted to YouTube on Sept. 3, 2020.

A young Uyghur man has been arrested after he published a series of videos that went viral criticizing Chinese authorities over rights abuses against his family and compatriots in the restive Xinjiang Uyghur Autonomous Region (XUAR) where more than a million Uyghurs are locked up in internment camps.

A Xinjiang government official confirmed with RFA’s Uyghur Service on Friday that Miradil Hesen was arrested in eastern China’s Jiangsu province where Hesen said he had been sought by police since August 2018 for downloading Instagram—which is blocked in the country—to his cellphone.

“He was arrested because he intentionally attacked and demonized China … He created a huge issue,” a female government party commission official in Onsu (in Chinese, Wensu) county in the XUAR’s Aksu (Akesu) prefecture told RFA. “His intentional online attacks and rumor-mongering has caused a huge impact in Wensu county.”

In six videos posted to YouTube between Sept. 2 and Sept. 4, Hesen slammed the authorities for abuses on his mother, who he said was forced to undergo sterilization that he claimed led to uterine cancer, and his grandfather, who has retired as a village secretary but may have his government pension stripped.

His criticism in the videos were accessible by people in Xinjiang, based on interviews by RFA. Usually such videos would have been removed promptly by the authorities.

Appearing disheveled and troubled by the alleged abuses of his family and his community, Hesen said that he had graduated from university in Jiangsu but was made to return home to Aksu in early 2018 to “register” with authorities after they pressured his parents.

Speaking at times in Uyghur, Mandarin Chinese, and English, Hesen says in the videos that he fled to Jiangsu after being contacted by police in his home district of Dapsen, in Onsu over the Instagram download.

“The purpose was to arrest me and send me to an internment camp, but I escaped to Jiangsu,” he says. Authorities are believed to have held up to 1.8 million Uyghurs and other Muslim minorities in a vast network of internment camps in the XUAR since April 2017, often for similar acts they label signs of “extremism.” 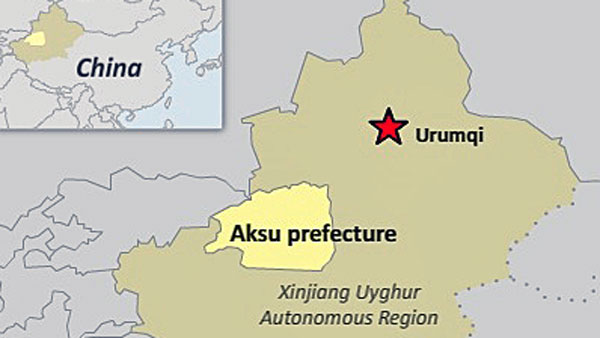 In the videos, Hesen mentions details about his mother, Tursungul Tohtiniyaz, whom he claims sought cancer treatment at the Hospital of Oncology in Urumqi in 2017 after complications related to forced sterilization.

“I’m sharing this today to inform you of the bad things that the CCP [the Chinese Communist Party] is doing to Uyghur women in Uyghurstan,” Hesen said in one video, using a name preferred by some Uyghurs for their ancestral homeland.

Hesen also discussed family planning campaigns that German researcher Adrian Zenz said in a June report had led to a dramatic increase in recent years in the number of forced sterilizations and abortions targeting Uyghurs in the region, suggesting they may amount to a government-led campaign of genocide under United Nations definitions.

Hesen posted his last video to YouTube on Sept. 4 and then went silent, suggesting he had been arrested.

RFA was able to verify some of the details cited by him in his videos after talking to several officials in Onsu county, including his mother’s formal complaint against an administrator of the hospital where she was treated for cancer.

From Germany, World Uyghur Congress President Dolkun Isa said he was “deeply worried” about Hesen following his arrest. “We call on the Chinese government to immediately release him and guarantee his life and liberty.”

“Miradil Hesen risked his life and gave online testimony about the unspeakable suffering of the Uyghur people in recent years under China’s brutal rule,” Isa said. “He talked about local authorities’ horrific treatment of his family and especially the sterilization of his mother and subsequent hospitalization due to uterine cancer.”

Speaking for the voiceless

According to Hesen, he has been homeless for the past two years since going to Jiangsu and that he had cut all links with his family members in XUAR, fearing that he could be caught or that his parents might be targeted.

While it is not immediately clear why Hesen chose to create the videos despite the danger it could create for himself and his family members, he says he “received messages from God” to “speak out for those who do not have a voice” and could no longer refrain from doing so.

In his videos, with Han Chinese pedestrians walking behind him, Hesen refers to himself as the founder of the “Freedom Movement of Uyghurstan” and notes that it is rare for members of his ethnic group to be able to air grievances about the persecution they face in the XUAR under Beijing’s policies.

While he describes how Uyghurs endure discrimination and restrictions on movement at the hands of Han Chinese authorities in the region, he also details several of the harsher forms of repression RFA’s Uyghur Service has documented through its reporting in recent years, including severe restrictions on religion and culture, the internment camp system, and the transition of detainees into forced labor schemes.

Hesen’s YouTube postings come a month after the BBC published a video of a young Uyghur man who risked severe punishment to take a video of himself in detention in the XUAR and later disappeared, along with his aunt, who sent the video out of the country.

The nearly five-minute video showed Merdan Ghappar, a 31-year-old Uyghur model for Chinese online retailer Taobao, shackled to a bed in filthy living conditions while political slogans are played over a loudspeaker outside his barred window.

The video, and several text messages Merdan sent, appears to show some of the best evidence yet of China’s continuing policy of mass incarceration of Uyghurs and other Muslim minorities, in contradiction of a government narrative that all detainees have “graduated” from the facilities that officials refer to as “vocational schools.”

Just a correction on one of the quotes from Miradil Hasan. He did not say he “received messages from God” to “speak out for those who do not have a voice” and could no longer refrain from doing so. What he actually did say was that “I believe in a soul and higher power. What I want is for the freedom of Uyghurs, and this will be the right thing morally.” He did not mention that he received a message from God. I just wanted to clarify that point.

We all know He tells the truth. Xi is a brutal dictator working for old man Jiang Zemin family making the Zemin family wealthy. China freedom of thought and prayer to God for help cannot be suppressed. There will be more and more like him who will have nothing to lose and will continue peaceful struggle like Ghandi, until they have freedom.